Citigroup agreed to acquire the credit card and financial products business of Illinois-based Sears, Roebuck for an estimated $5 billion. The purchase will make Citigroup the largest private- label card provider in the US and extend its lead as the nation’s largest credit-card company.

The acquisition price was to consist of an estimated $3 billion in cash and up to $2 billion in profit-related payments, according to Thomson Financial Securities Data.

Sears is leaving the consumer- finance business after 90 years to concentrate on its core retail business. Sears and Citigroup will enter into a long-term marketing and servicing alliance with an initial term of 10 years. Some 8,300 full- and parttime Sears employees will move over to Citigroup when the deal closes, which is expected at the end of this year.

New York-based Standard & Poor’s cut its debt rating on Sears, saying that the credit business has been a vital factor in assessing the company’s overall credit rating.

“The downgrade reflects the absence of this historically important foundation to the credit rating and a greater reliance on a retailing business that has a very challenging future,” the rating agency said.

Sears plans to use the proceeds of the sale to pay down debt and for general corporate purposes.

Robert B.Willumstad, president of Citigroup and chairman and CEO of its global consumer group, says the transaction creates growth opportunities for the bank.“Sears is a unique franchise, as 60% of US households are Sears customers, including a significant Hispanic customer base—a key focus of our consumer business marketing efforts,” he said in a statement.

“The price we are paying is higher than the market has been expecting,” says BAT chairman Martin Boughton,“but it reflects the detailed financial information we have received, the discussions we have had with ETI’s management and our view of the long-term prospects for the business and synergies that can be achieved.”

The merger, in a stock-swap transaction valued at $900 million, is expected to improve Far EasTone’s ability to compete in planned high-speed mobile Internet services.

“Through our alliance, we will be able to reach a larger economy of scale and strengthen our market position,” says Douglas Hsu, chairman of Far EasTone.

The acquisition will boost Far EasTone’s customer base to 7.7 million. 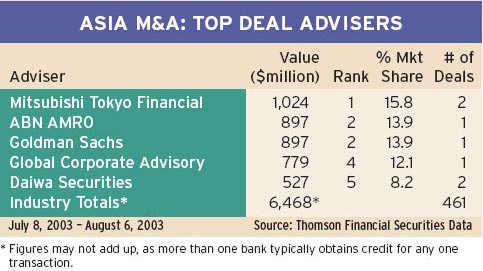