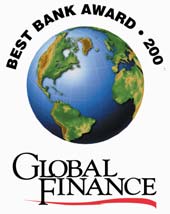 terrible years, the world’s banks must have been looking forward to a less tempestuous time in 2003. And that was what they got. Sure, there have been trouble spots in the past year, too, but most of the difficulties that banks have had to endure sprang from earlier crises.

The winners of this year’s best banks awards are those banks that emerged from the fray not only unscathed but stronger. Our picks start with the half-dozen truly global banks that provide the best corporate, retail, private, asset management, custody and investment banking services. Global Finance’s editorial team also identified the best bank in 78 countries and regions, from a much larger group.

In selecting these top banks, factors that were considered range from the quantitatively objective to the informed subjective. Among nominally objective criteria we considered such factors as growth in assets, profitability, geographic reach, strategic relationships, new business development and innovation in products.

Subjective criteria included the opinions of equity analysts, credit rating analysts, banking consultants and others involved in the industry. The mix of these factors yields leading banks that may not be the largest, the oldest or the most diversified in a given country or sector, but rather the best—the bank with which corporations around the world would most likely to want to do business.

Within this listing of the World’s Best Banks we have repeated our list of the Best Emerging Markets Banks, first published in our May 2003 issue. 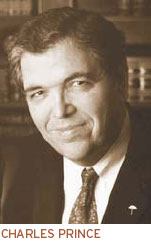 The name is synonymous with global banking, and for good reason: Citibank serves corporate clients in more than 100 countries. Its reach spreads from Chile, where it began as the country’s first foreign bank in 1916, to Lebanon, where its expansion began in the 1950s, to Vietnam, where it established a presence only 10 years ago. Analysts say the bank is highly regarded for staying with its customers through thick and thin. It can frequently be the only reliable banking option in some developing markets. That strength in emerging markets—plus its reputation for offering corporate clients a continuous stream of new and innovative products—is what keeps executives of multinationals tapping into the Citibank brand. Corporate clients know they are getting topnotch expertise and managers no matter what service they’re using. Users of its global transaction services, for example, know that Citibank’s financial network and operations system processes more than $1 trillion in transactions daily for clients from around the world.And the bank is backed by the $1.187 trillion in assets of its parent, Citigroup. 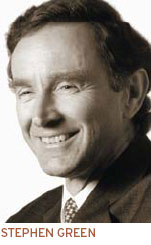 ‘The world’s local bank’ is the tagline HSBC uses in its publicity materials, and it pretty much defines the financial institution, established more than a century ago as The Hongkong and Shanghai Banking Corporation. Created to finance the growing trade between China and Europe, the thoroughly modern HSBC today zeroes in on providing consumer banking services through its international network of more than 9,500 offices in 79 countries and territories.“They’re very focused on consumer banking.They see it as a large part of their future,” says one London-based banking analyst. So focused, that this year HSBC completed its acquisition of Household International, a leading consumer finance company in the United States.The purchase gives HSBC a consumer credit business with 53 million customers and more than 1,300 branches in 45 states.The bank made a major shift in 1991 when the group’s member companies were brought together under the single ownership of HSBC Holdings and the newly formed company moved to London. Since then, bank executives haven’t looked back.They’ve made acquisitions of major banks in Brazil, Argentina, New York City, France and Mexico. A consistent management style and “extraordinary discipline” keeps this financial institution at the forefront of banking in the 21st century. 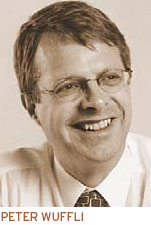 A core business of this giant Swiss financial institution, the UBS Wealth Management division is one of the banking world’s long-time leaders in private banking. Analysts say UBS continues to be successful even in difficult economic times by adhering to the “very unglamorous strategy” of maintaining its strength and stability. It successfully weathered the investment trend of the late 1990s when some of the new money generated by investors in the technology boom initially chose more glamorous deposit sites than staid Swiss banks. And the bank has grown to meet the needs of the next generation of private banking clients: the sons and daughters of oldmoney families who want more than just a cozy relationship with their private bank.The bank has met those needs with an ever-expanding range of products and sophisticated risk management techniques even as it continues to pamper clients with exceptional service that focuses on their changing needs. In turbulent or prosperous times, private banking clients know their bank is backed by a global financial powerhouse with more than 140 years of experience and nearly 70,000 employees spread throughout 50 countries around the world.

Despite increasing competition, this Swiss financial giant continues to draw accolades for keeping its sophisticated clients satisfied. UBS Global Asset Management uses its reputation for security and stability, financial strength and a broad range of investment solutions to attract customers from around the globe. The asset management division has more than 2,700 employees in 20 countries working to provide investment products and services to corporate and public pension plans, financial institutions and advisers, and central banks, as well as charities, foundations and wealthy individual investors.At a time when other large asset management banks are losing money, UBS continues to generate business: It has about $419 billion under management. As one London-based financial analyst says, the bank has done well by “sticking to its knitting” and offering its clients a consistent strategy that makes them money. No doubt customers are lured by the bank’s wide array of traditional and non-traditional investment vehicles that range from stocks in socially responsible companies to emerging market bonds to hedge funds to investments in timber. The bank manages to deliver solid returns with its investment expertise and sophisticated risk and currency management techniques.

THE BANK OF NEW YORK 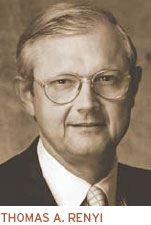 Known as a versatile player able to handle all the banking needs of the modern multinational, The Bank of New York has long been one of the world’s top custodial bankers. This Wall Street financial institution’s pedigree goes back to its founding in 1784 by Alexander Hamilton. But age doesn’t equal stodginess. The Bank of New York has transformed itself from a traditional commercial bank into one of the world’s top financial asset servicers with a consistent strategy focused on high-growth, fee-based businesses and investments in technology.This year, the bank expanded its clearing capabilities by spending $2 billion to acquire Pershing LLC, one of the largest correspondent clearing businesses, from Credit Suisse First Boston. Combined with its own clearing business (BNY Clearing Services), Bank of New York now has a customer base of more than 1,000 brokers-dealers and investment managers. That translates into 100,000 investment professionals and 5 million client accounts. Analysts agree the bank’s strengths remain its use of innovative technology and its wide variety of custodial and other services. As of the end of March, the bank’s assets under custody were $6 trillion to $8 trillion.

Thomas A. Renyi, chairman and CEO 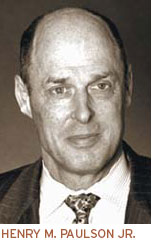 Although not quite the largest in terms of equity capital, this investment bank is one of the global leaders in arranging corporate mergers and acquisitions as well as equity offerings. “They’re very well organized, they have an international presence, and they’re always very professional,” says one New York City-based analyst. While especially popular among US corporate executives, Goldman Sachs has a strong global customer list. And the bank hasn’t been resting on its traditional investment banking laurels. This year the Wall Street institution helped boost its corporate lending abilities with the creation of a subsidiary called William Street and enhanced its ability to trade and hedge long-term electricity contracts with a $1 billion investment in a New Jersey electric utility. The deal, announced this spring, still hadn’t closed as of late August. But the bank’s expertise at structuring and executing complex and innovative transactions in a range of industries—from old-time industrials to high-technology firms to media conglomerates—makes it the investment banker of choice for some of the world’s most demanding clients. At the end of May, the bank had $15.3 billion in tangible common equity.