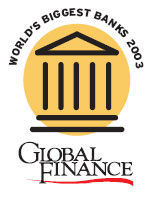 LAST YEAR WAS YET another tough one for the world’s biggest banks, and many of the top names saw their total assets fall over the year. The result is a shake-up of the names in the top-10 table, with two newcomers, Dutch giant ING and Japan’s Mitsubishi Tokyo Financial Group, knocking out Bank of America and Germany’s Bayerische Hypo- und Vereinsbank.

Citigroup has finally made it to the number-one spot, although its assets have barely grown—up to $1,097 billion from $1,051 billion. Last year’s leader, Mizuho Holdings, has slipped to second after seeing its assets decline from $1,270 billion to $1,030 billion. Deutsche Bank has swapped places with UBS, the German bank having dropped from third to fifth on the back of a decline in total assets.

Both the United States and Germany, which regularly dominate the biggest banks league table, saw falls in the numbers of banks in the table this year. The US contingent numbers 10 this year, down from a more-dominant 11 last year, while Germany’s top banks take seven of the top-50 spots, down from nine last year. Despite its problems, Japan still dominates the top of the list with three banks in the top-10.