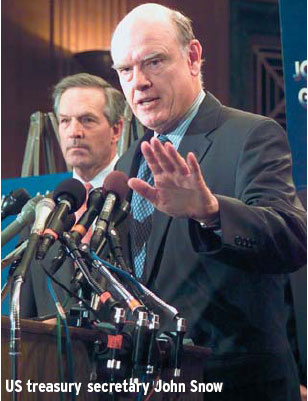 The United States began throwing its weight around in China lastmonth, with treasury secretary John W. Snow making it clear to Chinese leaders that they need to change their policy of allowing the yuan to weaken in tandem with the dollar. Since 1994, the Chinese currency has been pegged at about 8.28 to the dollar.As the greenback has declined, Chinese exporters have been handed an undervalued yuan, which gives them a competitive advantage in global markets.The National Association of Manufacturers, a Washington, DC-based trade group, argues that Chinese goods are 40% cheaper than they should be and that this is costing US jobs.With unemployment high and elections around the corner, US politicians have seized the issue, noting that China has surpassed Japan as the single largest source of the US trade imbalance.

China is expected to kowtow eventually to US pressure to revalue, or to link the yuan to a basket of foreign currencies.A massive inflow of capital to China from abroad is contributing to excessive money and credit growth that threatens to spur inflation. Economists say yuan appreciation would be a less painful way for China to deal with this problem than raising interest rates. Ironically, if the US does get its way on the issue, the tradeweighted value of the dollar will decline significantly, and there likely will be fewer Chinese purchases of US treasury bonds.This could destabilize US markets at a time when the record US current-account deficit threatens to send the buck down a slippery slope.

… BUT IF US CONSUMERS GO ON STRIKE, EXCHANGE RATES WON’T MATTER 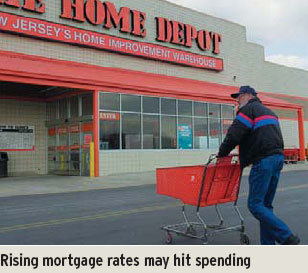 China and other Asian economies that depend on exports may soon have another problem to worry about: a tappedout US consumer. The issue of currency valuations could become irrelevant if debtladen US consumers stop shopping for electronics, clothing and other goods imported from Asia. Some American consumers already are struggling to make debt payments on their credit cards, and the situation could deteriorate, economists warn. According to New York-based Fitch Ratings, US consumer credit quality measures are likely to worsen in the current quarter and into early 2004, due to the lingering effects of a weak labor market. Fitch says it expects US personal bankruptcy filings to increase by about 8% in 2003 to a record level of 1.65 million. Millions of American homeowners took advantage of low interest rates to refinance fixed-rate mortgages in the past few years, taking the money out to spend on consumer goods. Many others were tempted by the lowest interest rates in 40 years to buy new homes, boosting demand for furnishings and appliances. With mortgage rates suddenly rising and applications to refinance homes falling sharply, the spending capacity of consumers is now being constrained. Despite signs that the US economy is recovering, jobs are still being cut and consumer finances remain under pressure. The surge in consumer spending that kept the US and other economies afloat during the past three years is not likely to be sustained. Meanwhile, many aging US baby boomers haven’t saved enough to pay for their retirement. Even they might be about to change their profligate ways. Since consumer spending accounts for about two-thirds of the US economy, this could spell slower growth ahead. And, as they say in Asia, “When the US catches a cold, we get pneumonia.”