Sumitomo Mitsui Financial made a $29 billion hostile bid for UFJ Holdings, which already had plans to merge with Mitsubishi Tokyo Financial.

Either suitor’s pairing with UFJ would create the world’s largest bank by assets.

The offer by Sumitomo Mitsui, which is advised by Goldman Sachs, launched the first-ever bidding contest in Japan’s banking industry.

While UFJ initially rebuffed the unsolicited bid from Sumitomo Mitsui, it issued a release saying it was examining the proposal prudently together with outside experts.

UFJ has an estimated $35 billion of bad loans, the most among Japanese banks. It says senior executives hid the extent of the problem by shredding and forging documents and evading audits.As Global Finance went to press, the Financial Services Agency had not yet decided whether to file criminal charges against the bank.

Ryosuke Tamakoshi, UFJ’s president, agreed to take an 80% temporary pay cut and to discipline more than 80 of the bank’s employees.

Sumitomo Mitsui, Japan’s third-largest bank by assets and by lending totals, offered to exchange its stock with UFJ on a one-to-one basis.The bid represented a 23% premium to the market price of UFJ’s shares.

When MTFG and UFJ announced an agreement to merge in August, they said the merger ratios would be set at a later date.

UFJ was the only major Japanese bank to post a loss in the second quarter of 2004, and the Japanese government is eager for it to be merged into a stronger bank that can help it clean up its loan portfolio.

General Growth Properties, a Chicago-based real-estate investment trust that specializes in the acquisition of shopping malls, agreed to pay $12.6 billion in cash and assumed debt to acquire Maryland-based Rouse.

General Growth says it expects to realize economies of scale from the Rouse acquisition and to gain stronger bargaining power with retailers.

Rouse’s upscale properties have sales of $439 a square foot, compared with General Growth’s average of about $345 a square foot. General Growth plans to borrow about $7 billion to fund the purchase and will have a debt total of $23 billion once the deal closes. It also may sell land from Rouse’s community development business.

The company said it would return $3.6 billion to its shareholders, cut its debt by more than $4 billion and raise its dividend by about 20%.

National Grid will hold on to four other networks serving 11 million customers.

It already owns New England Electric, as well as Niagara Mohawk, a utility based in Syracuse, New York.

*Figuresmay not add up, as morethan one bank typically obtains credit for any onetransaction. 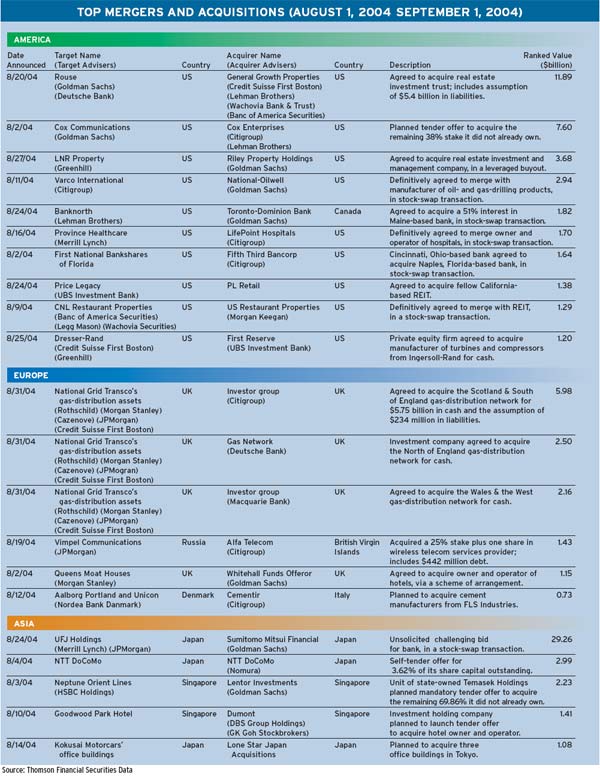 This article appeared in issue October 2004