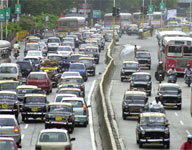 Chinese industrial output rebounded in August after months of decline. Analysts said strong export growth could explain some of the 15.9% year-on-year rise. But the data suggests state measures to cool off China’s economy are becoming less effective, fueling speculation that Beijing will raise interest rates. China’s central bank has said it will examine August indicators closely before deciding on a rate hike.

The frenzied hunt for oil and gas in India acquired further momentum with the Ministry of Petroleum and Natural Gas finalizing the awards of exploration blocks under the fifth round of the New Exploration and Licensing Policy (NELP). Twenty blocks were on offer, and most have gone to Indian companies or consortiums controlled by Indian companies. The government received 69 bids for the 20 blocks on offer, including bids from BP, Petrobras and British Gas, none of whom won.

The general feeling is that Indian companies have bid significantly higher in order to retain control over potentially lucrative assets. The largest gas finds anywhere in the world have happened in India in the past three years. The three biggest finds by Reliance Industries, ONGC and Gujarat State Petroleum Corporation (GSPC) have estimated reserves of 40 trillion cubic feet. ONGC announced another major gas find in the first week of September that will add to the tally. Indian oil companies bidding high for oil assets in India is in keeping with reports that Indian companies are on the prowl globally, looking for stakes in oil and gas fields in order to secure energy supplies as prices rise relentlessly.

Energy prices may be soaring, but the Indian automobile sector is recording some fantastic growth numbers. The motorcycle segment grew by 31% over the year to August, recording sales of nearly half a million units. India is the world’s second-largest market for motorcycles and mopeds, and the growth over several quarters has been scorching. The passenger car segment, too, has seen some terrific growth numbers for August, with the Suzuki Motors subsidiary, Maruti Udyog, that controls about half of India’s passenger car market, reporting a 9.5% volume growth, at 46,500 vehicles.

The rapid volume and earnings growth across industries is attracting a lot of investor interest in Indian stocks. The Indian stock market indexes went to a brand new high in August as overseas fund inflows continued. The BSE Sensitive Index that tracks 30 large-cap stocks hit an all-time high of 7983 points in August. Between January and August 2005, foreign investors have poured in $7.8 billion, with August recording one of the highest monthly inflows at $1.1 billion.