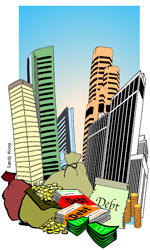 The Federal Reserve Bank of New York invited 14 major participants in the credit-derivatives market, primarily investment banks, to a meeting on September 15 to discuss market practices in the fast-growing industry.

Credit derivatives, which are linked to the probability that a company will pay its debts and which have become popular hedge-fund investments, have been growing so quickly that regulators worldwide have expressed concerns about delays and errors in processing trades. Hedge funds are so big and do so much trading that they have changed the dynamics of the corporate bond market. These sometimes highly leveraged funds are the biggest users of credit derivatives.

There were $8.4 trillion of credit default swaps outstanding at the end of 2004, a nine-fold increase in just three years, according to the International Swaps and Derivatives Association, or ISDA, the global trade association of the privately negotiated derivatives industry. A credit default swap is an agreement by one party to accept a premium at regular intervals in return for making a larger payment if a specific company defaults, goes bankrupt or suffers a negative credit event.

Price swings in the credit derivatives market following the downgrades of Ford Motor and General Motors debt in May caused hedge funds to lose between $1 billion and $2 billion and raised fears of a wider financial meltdown, similar to the collapse of Long-Term Capital Management in 1998. While that didn’t happen this time, the New York Fed wants to help make sure it won’t have to launch more rescue missions.

Representatives from the US Securities and Exchange Commission, the Office of the Comptroller of the Currency, the New York State Banking Department, the UK’s Financial Services Authority, Germany’s Federal Financial Supervisory Authority and the Swiss Federal Banking Commission also were invited to attend the New York meeting. Despite the presence of so many financial supervisors at the gathering, industry participants say regulatory and legislative restrictions on over-the-counter derivatives

are unnecessary and are unlikely to be imposed.

Andrew P. Cross, associate and member of the investment management group at international law firm Reed Smith’s Pittsburgh, Pennsylvania, office, says the sharp growth in the credit derivatives market, and in over-the-counter derivatives in general, has been very exciting. “A key success factor will be controlled and sustainable growth,” Cross says. “While the industry has embarked on a new journey, the over-the-counter derivatives market is not an unmanned ship. Very skilled and qualified leaders are looking out at the horizon and guiding the industry,” he says.

One reason the growth has been so rapid is because there has been thoughtfulness on the part of market participants, through participation in industry groups such as ISDA, according to Cross. He commends the New York Fed and the Counterparty Risk Management Policy Group, or CRMPG, chaired by E. Gerald Corrigan, managing director in the office of the chairman at Goldman Sachs, for acting in a pro-active manner. The CRMPG, which includes senior officials from financial institutions, recommended the September 15 meeting to address certain documentation issues before they got to the point of becoming a problem, Cross says.

In a report released on July 27, the Corrigan-led group examined the challenges faced by market participants with regard to the management and use of highly complex financial instruments. “The deals can get complicated, but they are able to be understood,” Cross says.


The policy group called for urgent industry-wide efforts to cope with serious back-office and potential settlement problems in the credit default swaps market. It also called for an end to the practice whereby some market participants assign their side of a trade to another institution without the consent of the original counterparty to the trade. “Among other things, this practice has the potential to distort the ability of individual institutions to effectively monitor and control their counterparty credit exposures,” the report said.

Robert Pickel, CEO of ISDA, says the trade association has made progress in confirmation of assignments, or novations, as they are sometimes known, and will be introducing a protocol that will make a big impact on derivatives-assignment processing. “ISDA has put confirmation of assignments front and center of its agenda; its forthcoming protocol goes right to the heart of that issue,” Pickel says. “The weight of the full ISDA membership is behind continued improvements to confirmation processing,” he adds. The protocol will facilitate a change of the consent requirement on assignment of trades from written to oral and expedite the process, according to ISDA.

The association released a survey in June showing that there had been an increase in the automation of confirmations, or documented evidence of trades, to 40% from 24% in last year’s survey, while the backlog of confirmations was reduced to 11.6 days from 17.8 days. Error rates in processing, including changes in trade details, fell to an average of 9% of transactions, from 18% last year. Pickel says these results of the survey were encouraging, particularly in light of the increased volumes in credit derivatives trading. The association’s target is to automate 70% of trade confirmations by the end of this year.