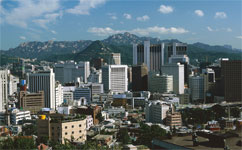 That the South Korean economy is export driven is undisputed even now as it faces the challenge of a possible weakening of demand in its major markets. Consumer demand in China is increasingly coming under a cloud as that country works with a stronger currency that might hurt its export earnings over time and thus affect its imports from South Korea. Demand from the United States, another major market for South Korean companies, is also weakening. However, despite these concerns, the export growth rate of 18.8% for August this year is the highest the economy has seen in the past nine months.

As a result of the strong export numbers, the KOSPI stock index climbed to an all-time high in early September of 1,153.63 points, driven largely by electronics companies Samsung and LG Electronics. Samsung is South Korea’s most important exporter, accounting for 10% of the country’s export volume.

Despite obvious export success in electronics, shipping and automobiles, the South Korean government is leaning toward the view that reviving domestic demand is the answer to generating sustained GDP growth, especially for the latter part of 2005 and for 2006.

The finance ministry has said that it expects GDP growth to pick up in the second half but, given the uncertainty in both the external and domestic sectors, has reduced the GDP growth it expects for the full year to 4% from 5%. The IMF in a recent statement acknowledged that 2005 growth would hover around 4% but predicted that the economy would raise growth rates to 5% in 2006.

The South Korean central bank is also unclear about whether it should be using monetary policy to promote the external sector or to stimulate domestic demand—especially as the country faces the possibility of an increase in interest rates. Its biggest worry is the threat of inflation, prompted by both the rising cost of crude oil and the continuing acceleration of growth in Asia’s third-largest economy. The central banks of the neighboring economies of Indonesia and Thailand have already raised interest rates as they try to minimize the risk of inflation.

The worries are beginning to pile up as the Korean won continues to depreciate against the US dollar, and this will begin to exacerbate the impact of the increase in the cost of crude, prices of which have increased by 70% in the past few months.

But while tinkering with interest rates may be necessary to protect the external sector and reduce the threat of inflation, it puts the economy in a dilemma. Higher interest rates could dampen the nascent strengthening of the domestic economy, particularly as there are already signs of uncertain consumer confidence levels. Recent surveys have shown that consumer confidence in August is the lowest it has been all year—primarily as a result of rising energy costs, worries over interest rates and issues over job security as pressure mounts on politicians to end the high level of protection that Korean workers enjoy.