Features : On A Roll

Surging oil prices are revitalizing a flagging economy, but investors should not forget the upsets of the recent past. 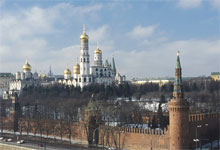 Surging oil prices are revitalizing a flagging ecHas Russia turned the corner—for good, this time? A vibrant commodities price environment has fueled an impressive streak of economic growth, filling government coffers and sparking a consumer boom. The country is comfortably ensconced in investment-grade territory after years in the investment wilderness following the blunders and bad luck of the 1990s, culminating in the financial crisis of 1998. The Russian stock market is up 23-fold since its October 1998 all-time low. As the perception of Russia risk has fallen, a parade of previously doubtful multinational firms are close to making significant direct investment in Russia—or already have. Russia seems to be bearing the trademarks of an emerging market that is joining the mainstream.

But a resurging economy is only part of the story, and there’s lot of uncertainty beneath the surface. For starters, investors seem to have all but forgotten the Yukos affair—which ended with the May 2005 sentencing of Mikhail Khodorkovsky, the former head of what was Russia’s largest oil producer, to nine years in prison—even though none of the risks highlighted by the controversy have been mitigated. Rising state interference in the economy, and in the oil and gas arena in particular, is alarming the private sector. On the political front, the approach of the end of President Vladimir Putin’s constitutionally mandated last term heralds the return of political uncertainty. Meanwhile, the Putin economic reform program is ancient history, and the window of opportunity to build a firm foundation for sustainable growth—so that the economy wouldn’t stumble if, say, the price of oil was to return to historical mean levels—is being severely under-exploited.

onomy, but investors should not forget the upsets of the recent past.

But investors in Russia seem to have a particularly severe case of the selective amnesia that frequently characterizes investment in emerging markets. After all, the Yukos affair, in which the Kremlin destroyed the country’s flagship company and in essence nationalized its assets, ended only in May 2005. Critically, the myriad issues it highlighted—relating to the sanctity of property rights, the role of the state in the economy, and the real level of control the Kremlin has over the government, to name just a few—are, if anything, even further away from any sort of real resolution. “We’ve got plenty of cases in the cartridge clip,” remarked a deputy general prosecutor in June, indicating that Yukos may not be the last example of the Kremlin going after a blue-chip member of Russia, Inc.

Meanwhile, the state is engaging in a stealth operation to ensure that it maintains control over the oil and gas sector as part of what appears to be an overall effort to broaden its presence in the economy. The Kremlin is in the process of increasing its shareholding in gas giant Gazprom to a controlling stake (in part to liberalize the trading of local shares in the company, a measure that’s been delayed for years) via state oil company Rosneft. Gazprom, meanwhile, is close to buying Sibneft, one of the country’s largest oil producers, from oligarch (and Chelsea Football Club owner) Roman Abramovich, for apparently no purpose other than to secure state control over more oil assets. Putin’s bureaucratic reform program seems to have done very little to address corruption, which has only gotten worse in recent years: in Transparency International’s Corruption Perception Index, for example, Russia has fallen from 82nd position in 2000 to 90th (on a par with Mozambique, India and Gambia) in 2004.

On another front, the Putin government’s much-touted reform program is over, as focus shifts to upcoming parliamentary elections in late 2007 and presidential elections in 2008. Putin has repeatedly stated that he will not seek a third term and that he will step down in accordance with the constitution. Regardless, the Kremlin has made it clear that it won’t brook any unsponsored pretenders to the throne. Former Russian prime minister Mikhail Kasyanov faced an investigation into his acquisition of a government country home soon after he made noises about running for president. The Kremlin’s sledgehammer approach toward Kasyanov, who most analysts agree would have no realistic chance of being elected even in a normal democratic environment, signals that the next phase of Russia’s political evolution will be very carefully stage-managed. The recent revolutions in Georgia, Ukraine and Kyrgyzstan have not gone unnoticed by the Kremlin, which is eager to prevent any attempts to import revolution to Russia.

Russia is on a hot streak, one that may continue in the medium term. But don’t be fooled into thinking that Russia has turned normal. Russian markets will remain strong as long as they’re well supported by high commodities prices and a relatively benign political environment. The recent past has shown, though, that it doesn’t take much to rattle investors in Russia. And since nothing has really changed since the last big upset, Russia risk may be in the process of being a bit too discounted at this point.


Kim Iskyan, head of research at MDM Bank in Moscow.