As Nordic banks look further outside their home markets for growth, the rewards—and also the risks—are increasing. 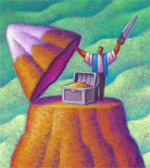 Over the past few years, banks in the Nordic region have benefited from highly favorable economic conditions across the region. With above-eurozone average economic growth and low unemployment rates, consumer confidence and corporate investments have been boosted. As a result, both residential mortgage lending and other types of lending have been growing—which is good news for the banks in the region. But with saturated markets and declining margins, most of the big banks have looked outside their home markets for growth. Many banks first looked to the Baltic region, and now their focus has moved on to Russia, the Ukraine and beyond.

Miguel Pintado, director in the financial institutions group at Standard & Poor’s, says that the Nordic markets are seeing increased lending, particularly on the mortgage side. “But they all tend to be low-growth, high-competition economies,” he says. They face extremely low margins, and margins are still going down in their domestic markets. As a result, all of the big banks are looking for growth elsewhere—either within the Nordic region or out of their base.

In terms of expansion, the focus has been on acquiring existing banks in target markets and growing organically from there. “They are primarily looking to grow further into the Baltics, which has been a big focus over the past few years, and in Russia and the Ukraine—offering really huge markets compared to the Nordic region,” says Pintado.

SEB and Swedbank have both bought banks in the three Baltic countries, which are currently growing faster than their home-country operations. Danske Bank has strengthened its pan-Nordic-Baltic regional focus with the recent acquisition of Finland’s Sampo Bank. Svenska Handelsbanken (SHB) has made a number of small acquisitions within the Nordic region and built out its branch network to focus on building its Nordic presence. Even DnB NOR in Norway, which traditionally focused on domestic development, is beginning to look outside its home market for growth.

Following the Customer
“Over the past three to five years there has been a big focus on the Nordic-Baltic region among the Nordic banks,” says Erik Zingmark, global head of cash management sales at SEB. “We have now integrated our markets around the Baltic rim—the Nordic and Baltic countries, Poland, Germany as well as the Ukraine and soon Russia. We have always followed our customers to their new markets. In the Baltic rim region, also referred to as Northern Europe, there are very strong trade paths.”
However, some analysts are concerned by the expansion pathways being taken by Nordic banks and the market conditions they face. “What is worrying to us is that the Baltic economies all have a negative outlook,” says Pintado. “They are all single-A or lower, and the Nordic banks are known as the lenders of last resort in the region. If they stop lending, it could have a significant impact on that country as they have a huge presence within those markets. Latvia is the most risky right now, with a big current account deficit and high inflation.”

In a recent report, analysts at SEB wrote that growth will slow modestly in the Baltic countries, but overheating risks remain. “Although credit growth has eased slightly, inflation and current account deficits remain at high levels,” the report states.

Another concern is the growth into new markets, such as Russia. “The second point that worries us is too-aggressive expansion beyond the Baltics into Russia and the Ukraine,” says Pintado. “In their quest for growth they are trying to position themselves in a market they don’t know very well.” He adds: “To date the investment has not been significant, so there is no rating pressure as yet. But it is something we are watching, and if they do expand further, it could be something we would worry about.”

But Olivia Perney Guillot, analyst at Fitch Ratings, says that capital-markets-driven businesses have been boosted by the lively merger and acquisition activities and volatile equity markets. “Strong business volume growth has offset the impact of competitive pressures on margins, enabling most of the banks to report increases in earnings from almost all their activities, from mortgage lending to capital markets services to savings products,” she notes.
The growth in mortgage portfolios does bring its own risk. “Given the composition of books—some banks have a huge mortgage lending portfolio—the potential for capital relief in three years is quite high,” says Pintado. “There is a risk that after 2010 those banks with a big mortgage portfolio may see required capital significantly reduced, which is something we might monitor quite closely,” he adds. While the risks they face in the future will be the same as they are now, under Basel II the banks will have been able to reduce the capital they retain to back those risks. However, he notes that the big Nordic banks have extremely high asset quality, they are quite profitable, and they have some of the most efficient banking operations in Europe.

Transaction Banks Look To SEPA
On the transaction banking side, institutions in the region, as with those across the EU, are looking toward the single euro payments area (SEPA). Zingmark at SEB says that compliance, client expectations and regulations around SEPA will be the big focus of most transaction banks in the coming two years. “It drives a lot of costs within the bank, so it puts some constraint on what you can do in other areas,” he explains.

In addition, with SEPA, payments are further commoditized and profit margins are decreased, so banks need to focus on where they can add value to clients and find other sources of income. “We will be focusing on a combination of improved liquidity management solutions and advice-driven delivery,” Zingmark says. “We want to provide services across the whole financial value chain of a company, which in the future will include trade finance and more integration into cash management. We also expect to integrate the trading and capital markets parts of the bank into our overall offering to customers.”