Legislation aimed at cracking down on funding for terrorists is having some damaging side effects for banks and businesses.

Following the attacks of September 11, 2001, US president George Bush asked the world to “stop payment” on what he termed the “lifeblood of terrorist operations”: their money supply. And in an effort to make that happen, his administration passed a number of pieces of legislation that not only gave federal intelligence agencies far-reaching investigative powers but also made the provision of “material support” to designated terrorist organizations a criminal offense. Companies such as banks were forced to invest millions in training staff and implementing systems to detect “suspicious transactions” that might help provide some insight into the financing of terrorist activities.

Six years on, everyday companies going about their business are starting to feel the pinch of the legislative “war on terror.” In the United States, banks are fighting multimillion-dollar lawsuits alleging their involvement in helping finance terrorist organizations. Islamic financial institution Dar al-Maal al-Islami Trust, for example, is a defendant in a consolidated $1 trillion lawsuit brought by families of those who died in the September 11 attacks. In January this year a judge at the US District Court for the Eastern District of New York refused to dismiss a lawsuit brought by survivors and families of suicide bombing victims that alleges that Jordan-based Arab Bank “knowingly and intentionally provided services to organizations it knew to be terrorist organizations.”

“These are important test cases,” says Rachel Ehrenfeld, director of the American Center for Democracy and author of Funding Evil: How Terrorism is Financed and How to Stop It. Despite banks having invested millions in anti-money laundering (AML) solutions and trained staff to detect “suspicious transactions,” she believes banks could do more to prevent funds being channeled to terrorist groups. Although terrorist funds may be physically transported, she is adamant that the bulk of the money “is being channeled through banks.” She says it is a bank’s job to know who its customers are. Know Your Customer (KYC) is part of the “due diligence” provisions mandated by the US Patriot Act, which was passed following the September 11 attacks. Ehrenfeld says KYC and AML are not just about investing in automated solutions but also training bank staff to know what to look for. “It may cost [the banks] more, but on the other hand it could save lives,” she says. 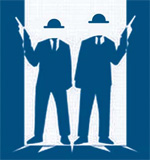 Under the Patriot Act, law enforcement agencies are able to request that banks share account and transaction information pertaining to individuals or businesses suspected of engaging in terrorist acts or money laundering. The onus is on banks and other financial intermediaries, including money services businesses, brokers, shipping agencies, mutual funds and casinos, to file Suspicious Activity Reports (SARs), which can pertain to terrorist financing, suspected money laundering or proceeds from crime in general.

Under the UK Proceeds of Crime Act, “it is a criminal offense for anyone who works in a regulated financial firm not to report any dealing that they suspect, or ought to suspect, involves the proceeds of crime.” This leads Jackie Harvey, an anti-money-laundering specialist and principal lecturer in finance at Newcastle Business School in the United Kingdom, to conclude that compliance officers, fearing any form of backlash, are reporting everything to cover their backs. SARs “have gone up from tens of thousands to hundreds of thousands,” she says. “The system is not working. Ninety-eight percent of what is being reported is innocuous.”

The UK’s Serious Organized Crime Agency (SOCA) reviewed the SARs regime in response to “concerns in the City and the professions about the burdens it imposes, against an apparent lack of successful exploitation of SARs by law enforcement.” It made a number of recommendations for improving it, including helping firms address “uneven and poor-quality reporting.”

Yet despite the money and effort financial service providers have invested in SARs and AML, the question remains whether the benefits outweigh the costs. Nick Kochan, journalist and author of The Washing Machine: Money, Crime and Terror in the Offshore System, says because of subtle but important differences between money laundering and terrorist financing, the role of AML solutions in detecting terrorist financing is questionable. “With money laundering, the banking system is abused as that is integral to cleansing the source of funds,” he explains. “With terrorism, the source of funds may be a charity, an individual, a politician or a country. The only reason why the banking system is involved is because it may be the cheapest and most satisfactory way of moving money from one individual to another.”

Unlike money laundering, which often involves large sums, terrorist financing is also difficult for financial firms to detect. For example, the 1993 World Trade Center bomb attack reportedly cost less than $20,000. Would a conventional AML system have caused alarm bells to ring if conventional banking channels had been used to transmit the funds? “The fallacy is perhaps that banks can anticipate terrorist financing,” Kochan continues. “That is where the system falls down.” While financial service providers can check the country of origin or destination of money transfers and perform identity checks on customers, he explains, terrorist names are difficult to pin down and subject to stereotypes. Furthermore, he says, sources of terrorist financing tend to be “multifarious,” which is why it is so impenetrable.

While the sharing of information between banks and intelligence agencies may prove helpful in understanding how terrorist groups operate and perhaps help to undermine them, the onus on firms to share information has forced them to address data privacy and human rights concerns. An example of this is the backlash that followed the revelation last year by The New York Times that the Brussels-based banking cooperative SWIFT permitted US intelligence agencies to access information pertaining to transactions flowing across its network. Data privacy groups argued that the information could be used for purposes—tracking tax avoidance, for example—other than terrorism-related intelligence gathering. To allay privacy concerns, SWIFT was forced to “re-architect” its data processing and storage.

But it is not just banks that are being affected by far-ranging anti-terror legislation. In the United States, Internet network-access and domain-name registration companies have also come under fire from campaigners like Ehrenfeld, who maintains that they are “facilitating Hamas fundraising and incitement by selling them Internet and television services.”

Increasingly, it is becoming questionable whether any company is safe from the far-reaching legislative powers being enacted to fight terrorism or whether they, too, could unwittingly find themselves in the firing line as part of the “war on terror.”