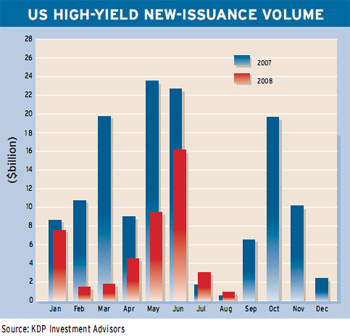 Less than $1 billion of US high-yield bonds were sold in August, one of the lowest monthly totals ever, as rising defaults and widening spreads above US treasury securities steered investors away from the market.

Caribbean Restaurants, the exclusive franchisee of Burger King in Puerto Rico, sold $149 million of notes on August 13 with a 14.25% coupon and a spread of 1,197 basis points over benchmark rates. Jefferies and Credit Suisse managed the sale, which took place in the Rule 144A private placement market.

The widening spreads reflected concerns over more write-downs from financial companies because of mortgage-related losses. Meanwhile, as Global Finance went to press, treasury secretary Henry Paulson announced a government takeover of mortgage companies Fannie Mae and Freddie Mac, which back $5 trillion in home loans. The Federal Housing Finance Agency will oversee the companies. Paulson said that if they had been allowed to fail, it would have affected the ability of Americans to get home loans.

“I have long said that the housing correction poses the biggest risk to our economy. It is a drag on our economic growth and at the heart of the turmoil and stress for our financial markets and financial institutions,” Paulson said. “Our economy and our markets will not recover until the bulk of this housing correction is behind us. Fannie Mae and Freddie Mac are critical to turning the corner on housing,” he said.

The takeover could have positive implications for the credit market, according to analysts at Barclays Capital Research in New York. “However, supporting the GSEs [government-sponsored enterprises] only addresses one aspect of the issues confronting the housing market, and we believe stress caused by falling home prices and illiquidity in nonconforming mortgages will continue to have negative ramifications for the market,” the analysts said in a report.

Issues of bank asset quality, liquidity and risk aversion remain, the analysts said, but the resolution of the GSE issue was a necessary first step. Despite declining commodity costs, economists still expect inflation to remain high, which could be a threat to investors’ appetite for bonds.

Given the lingering worry about inflation, the mix of a low policy rate at the Federal Reserve and restraining financial conditions feels somewhat akin to a driver having one foot on the accelerator and the other foot on the brakes simultaneously, according to Robert DiClemente, chief US economist at Citi. Important elements of the credit channel of policy influence are closed, either because the capacity to lend among many institutions is impaired or risk aversion for various reasons is unusually high, he says.

Sales of US high-yield bonds totaled $924 million in August, down from $3 billion in July, according to Montpelier, Vermont-based KDP Investment Advisors. While the high-yield market typically is slow during the summer months, the year-to-date total for the market of $48.6 billion is less than half of the total for the same period last year.

The biggest issue in August was a $300 million private placement of senior notes by Dallas-based Texas Industries, a supplier of cement and building materials. Banc of America Securities and UBS Investment Bank managed the sale.