Emerging markets have been some of the best performers of recent years. Is their continued growth now under threat? 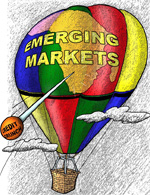 Since the credit crunch began more than a year ago, it has inflicted most pain on the developed world. US and European banks with exposure to subprime mortgage assets have been pummeled by stock markets. Corporates in those regions have been hamstrung by expensive or unavailable debt (and their debt-heavy balance sheets), and consumers in many countries have become steadily less confident as real estate prices have fallen and inflation has increased.

In contrast, for much of the year emerging markets have continued to enjoy strong growth, and in 2007 the MSCI Emerging Markets Index rose by nearly 40%. Underlying structural change in many developing economies and huge increases in commodities prices have continued to buoy sentiment toward emerging markets, and many investors have seen them as a safe-haven investment.

But in recent months the outlook for many emerging markets has become more pessimistic. Many commodities are down sharply from their peaks. Shares have slumped, with the MSCI emerging markets index down more than 20% since the beginning of the year and the largest markets, such as China (down more than 50% this year) and India (down almost 40%), sharply lower.
Insulated, Not Decoupled
Standard Chartered has been consistently pessimistic about the prospects in Western economies—and relatively optimistic about those in emerging economies—since the beginning of 2007. It never bought into the idea of decoupling, notes Alex Barrett, global head of client research at Standard Chartered Bank in London. “But we have always believed that many emerging markets are insulated and will not suffer to the same degree as developed markets.”

With global GDP growth estimated by Deutsche Bank to fall to 3.2% in 2008—its weakest since 2002—what does insulation mean in practical terms for emerging markets? “Growth in China, for example, will be hit by the slowdown in the US economy but will fall to, at worst, 8%, from 11.9% in 2007,” says Barrett. “It’s a significant slowdown, but it’s far from a recession.”

Barrett says the resilience of individual emerging market economies is dependent on two linked factors: the dependence of the country on exports to the developed world and the country’s ability to increase domestic consumption. Some emerging market countries are surprisingly unreliant on the US economy: For example, less than 5% of Russian exports are destined for America although 15% of India’s exports and 20% of China’s go to the United States.
However, Barrett says that the second element, domestic demand, will prove more important in underpinning emerging market economies. “China, for example, has policy tools at its disposal to allow it to stimulate domestic demand,” he says. “It can cut taxes, increase infrastructure spending to provide help for companies affected by higher commodities prices, and increase loan quotas for particular sectors in order to stimulate growth.”

With China’s foreign exchange reserves heading toward $2 trillion by the end of 2008, the country certainly has the funds to deliver a fillip to its economy. “China has, in effect, been subsidizing Western consumption for years [by buying Western debt and helping it to remain cheap],” says Barrett. “That process will end, and a new emphasis will be placed on domestic demand.”

Other countries have perhaps less leeway: India is currently running significant fiscal and current account deficits and, as a major oil importer, is suffering from higher prices. Yet, even here, Barrett expects recent wage increases in the public sector to feed through to higher domestic consumption, and GDP growth of 7.5% this year and more than 8% next year are predicted. “More importantly, there is plenty of medium-term infrastructure spending that will raise the metabolic rate of the economy and increase growth,” he says.

Some economists, such as Philip Poole, global head of emerging markets research at HSBC, note that rising inflation in many emerging markets poses a threat to growth. HSBC predicts that China’s inflation rate for 2009 will hit 6.8% compared to 4.8% this year while Indian inflation will rise to 8.4% from 6.4% in 2008 as a result of capacity constraints. But Barrett at Standard Chartered, while recognizing that inflation will rise, largely as a result of higher commodities prices, believes that it will not pose a major problem. “Higher commodity prices will squeeze corporate earnings and consumer spending, curbing further inflation,” he says.
Credit Crunch Boosts Long-Term Shift
The problem at the heart of the US and European credit crunch—the unwillingness of banks to lend money on attractive terms, if at all—is less of an issue in developing markets, says Barrett. “Of course, financing costs in emerging markets are always related to the developed world, and consequently credit is now more expensive than in the past, but finance is still available, and high levels of domestic liquidity mean the situation is likely to remain stable,” he comments.

Analysts are expecting emerging markets’ growth to increase relative to the developed markets, too. Research by Akber Khan, strategist at Deutsche Bank in London, shows that emerging markets are responsible for two-thirds of global growth since 2000. He estimates that “the implosion in the US and Europe will increase the burden to over 80% in the coming years.” Indeed, Deutsche Bank expects the contribution of non-emerging markets growth in 2009 to be the lowest since 1982.

Consequently, the credit crunch is likely to accelerate a trend predicted to dominate the century. “We are at a critical juncture in history,” says Barrett. “There is a long-term shift in economic power from the West to the East. It is a huge revolution that is already being felt in commodity and food prices. We are seeing revenues from commodities being recirculated in emerging markets, often through sovereign wealth funds, at the expense of developed markets. That is an entirely new trend that will, in turn, increase the speed of development in emerging markets.”

“It is wrong for anyone to suggest that the party is over for emerging markets,” says Barrett. “Even if it quietens down for a while, it’s still going to be a much better party than the wake going on in developed markets.”