Prospective issuers of Hong Kong DRs must follow the same rules as for the main board and will not be allowed to list on the exchange’s Growth Enterprise Market for growth companies. There is no requirement for the issuer’s shares to already be listed on another exchange.

HKex’s main objective is to attract more overseas issuers to list in Hong Kong at a time when initial public offerings from Chinese companies have been declining. The rule change that allows the exchange to accept applications to sell DRs came into force in July of this year, but so far no Hong Kong depositary receipts (HDRs) have been listed.

Depositary banks that have been in close contact with the exchange regarding the development of HDRs expect them to be an attractive way for Chinese investors to buy shares in foreign companies once China relaxes controls on outbound investment.

“The decision by the Hong Kong exchange to allow the trading of DRs is a landmark event for Asia’s capital markets,” says Anthony Nappi, managing director and Asia-Pacific region head of Citi Global Transaction Services (GTS). Citi Issuer Services, a division of GTS, began offering services for HDRs in July.

“With the introduction of HDRs, Hong Kong can now offer issuers an alternative to tap capital flows from China,” says Siu Chan Kwan, director and head of Asia-Pacific depositary receipt sales at Citi. At the same time, HDRs will allow Hong Kong investors opportunities to invest in foreign companies in their own currency, as well as US dollars, and directly on HKex, Kwan says.

In an interview with the Hong Kong Economic Journal, a Chinese language daily newspaper, published on August 11, Kwan said the HDR market has the potential to become the largest market of its kind in Asia.

As a result of regulatory restrictions on overseas listings, some companies in Russia, India and South Korea have opted for issuing DRs. These companies will find issuing HDRs attractive, thanks to the abundant capital resources and high liquidity seen in Hong Kong, where valuations of some sectors, such as mining, are higher than on other exchanges, according to Kwan.

HKex’s strategic plan for 2007-2009 set the objective of attracting more overseas companies to list in Hong Kong, the seventh-largest stock market in the world and the third-largest in Asia. HKex has some 1,260 listed companies and a market capitalization of more than $2.1 trillion at the end of July.

The exchange said that, following a period of monitoring the application of the new HDR listing rules, it may consider the future introduction of a simplified listing system that will be accessible only to professional investors.

Russian mining and resource companies with operations in the Far East are potential candidates for HDR listings. HKex signed a cooperation agreement last year with the Moscow Interbank Currency Exchange to promote dual listings and the bilateral flow of funds. In the past, Russian companies have listed DRs mainly in London.

Russian molybdenum miner SMR, owned by billionaire Oleg Deripaska, announced plans in February to float at least 25% of its shares in Hong Kong before the end of 2008. Meanwhile, the Russian stock market has dropped to its lowest level in more than two years. Investors are worried about falling oil and commodity prices, the war in Georgia and prime minister Vladimir Putin’s accusations of price fixing and tax evasion by Mechel, a large steel and coal-mining company. 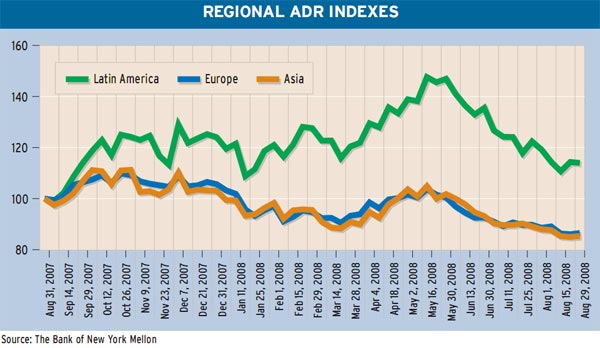