The strong rally in the high-yield debt market could be running out of steam, as the number of companies defaulting on their debts continues to rise, analysts say.

The US high-yield default rate rose to 10.2% in August from 9.4% in July, according to Standard & Poor’s. The ratings agency expects the corporate default rate to peak at between 11.4% and 18% sometime next year, depending on the strength of the economic recovery. In a pessimistic scenario, the default rate could surpass the 15.9% peak in the Great Depression of the 1930s.

“The precipitous increase in defaults reflects a pronounced decline in economic fundamentals and earnings prospects, as well as the continued unfavorable environment for the lowest rungs of the ratings ladder, effectively halting lending to low-rated speculative-grade borrowers,” Diane Vazza, head of global fixed-income research at S&P;, said in a report to clients.

Two US companies missed interest payments in the final week of August, bringing the year-to-date tally of global corporate issuers defaulting to 211, nearly four times the total for the same period a year earlier. The United States leads in total defaults, with 151

issuers, versus 13 in Europe, 34 in the emerging markets and 13 in the other developed countries, S&P; says.

The record-high proportion of issuers with speculative-grade ratings and the highest volume of low-rated issuance since 2003 make the current environment more conducive to defaults, according to the ratings agency. S&P; downgraded $2.9 trillion of company debt in the first eight months of 2009, up from $1.9 trillion in the same period a year earlier. 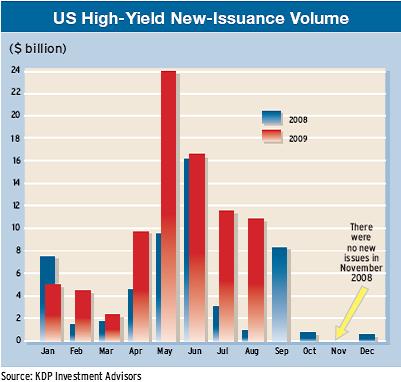 The high-yield market has produced spectacular returns for investors this year, as the return of risk appetite caused credit spreads to narrow to more normal levels after widening sharply in the wake of the Lehman Brothers bankruptcy last year.

“Positive technicals in the high-yield bond market—the primary driving force behind this year’s remarkable secondary-market performance—are showing the first signs of easing,” according to a Banc of America Securities-Merrill Lynch research report. Mutual fund flows have peaked, and liquidity held by high-yield fund managers has also come down significantly, the report says.Nonetheless, new issuance remained strong all the way through the customary late-summer hiatus and is expected to rise further, it says.

Meanwhile, the number of bankruptcy filings has surged. Some 54 issuers have filed for bankruptcy protection this year, which surpasses the full-year 2008 total of 49, according to S&P.; “The sharp increase in corporate bankruptcies brings with it significant difficulties to private equity investors, particularly for those whose buyout activities in the past several years placed much of their risks squarely in the speculative-grade domain,” S&P; says. More than half of the defaulters this year either had or continue to have private equity involvement, which presents both challenges and opportunities to private equity investors during restructuring and reorganization, it says.