THE NEXT GREAT LEAP FORWARD 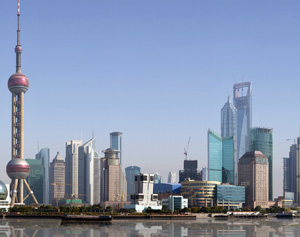 China is showing few symptoms of an economic crisis. While many of the world’s banks struggled to survive throughout the first half of the year, Chinese banks extended a record-breaking 7.37 trillion renminbi ($1.08 trillion) in new loans. The Shanghai stock market grew by more than 80% in the first seven months of the year, and real estate prices are climbing. The Chinese government’s 4 trillion renminbi stimulus plan helped the country achieve 7.1% year-on-year growth in the first half of the year, despite an almost 22% drop in exports.

Foreign companies operating within China’s borders are seeing sales step up. Hewlett-Packard recently announced double-digit revenue growth in China, while international automotive companies have benefited greatly from government subsidies on new-car purchases, with sales for Volkswagen, Hyundai and General Motors all growing by more than 50% year-on-year in July. Foreign energy companies are finding markets for technology and expertise as the government pushes for environmentally friendly investments, and consumer product companies are benefiting from the country’s retail market, which grew by 15.2% year-on-year in July.

Carl Hinze, an associate in the Shanghai office of international law firm Eversheds, describes the shifting nature of the global economy. “The financial crisis has definitely resulted in a situation where China’s role in the world has been advanced probably 10 or 15 years. Everyone knew that it was going to be a key player, but I think things are moving a lot faster than people expected because of what happened in Western markets,” he says.

China’s gains in global economic status are not coming without challenges, however. Many of the Chinese government’s largest overseas investments, including its purchases of stakes in private equity company Blackstone Group and investment bank Morgan Stanley, have fallen flat. A proposed investment in Australian mining company Rio Tinto by state-owned Chinalco failed after Rio Tinto’s shareholders rejected the deal, while the US congress stopped a proposed purchase of American oil company Unocal over political concerns.

Hinze believes that Chinese companies will continue looking abroad, despite some setbacks. “There will be a lot of movement in terms of Chinese investment abroad, and there will be a huge number of mistakes made as well because the learning curves are happening so rapidly. But I don’t think that will stop the investment process. [That] will get better with time,” he says.

While China’s expansion will likely face some setbacks overseas, the greatest challenge to the country’s rising status lies within its own economic engine. The record-breaking volume of new loans in the first half of the year has pumped liquidity into the Chinese economy, driving domestic demand and helping to sustain China’s companies as exports have dropped off. But this lending volume will be more difficult to sustain going forward.

Leo Wah, vice president and senior analyst at Moody’s in Hong Kong, explains: “It is natural to expect loan growth to slow. There’s a seasonal effect, a lot of projects got funding in the first half, and the central bank has sent a signal, even if not directly through policy, to make sure the banks slow loan growth.”

Tightened lending could affect Chinese companies in a variety of ways. Banks have extended most of the first-half lending to their traditional customers: large, state-owned enterprises and capital-intensive manufacturing companies. Many of the state-owned companies are supplying materials for the government’s stimulus projects. These stimulus projects are limited in duration, though, and the government will likely reduce spending for such projects in the coming quarters, forcing these companies to find new markets for their products.

The new markets may not be there. Deutsche Bank estimates the utilization rates of steel, cement and non-ferrous industries to be on average 10 to 20 percentage points below their historical averages. Once the government stimulus projects are completed, overcapacity problems will likely worsen.

The government is also concerned. China’s State Council, or cabinet, announced in late August that regulators would curb investments in industries such as steel, cement and energy. China is already the world’s largest producer of steel, cement and coal. If supply exceeds domestic demand, the struggling global economy will have difficulty absorbing the surplus.

Thus, the government stimulus and banking surge, while propping up short-term growth, may be exacerbating long-term problems. Michael Pettis, professor at Peking University’s Guanghua School of Management, explains: “The focus on investment in infrastructure and manufacturing will make much more difficult China’s ultimate transition towards an economy in which surging debt-fueled US household consumption plays a much smaller role.”

To compensate for lower consumption in export markets, Chinese policymakers are trying to boost the country’s own consumption. Toward this end, the government has announced plans to reform the country’s pension system, offer rural subsidies and expand healthcare insurance coverage. These moves will reduce the need for Chinese citizens to save, freeing up money for consumption. But these policies will also take time to implement and even more time for people to feel comfortable relying upon.

The deeper issue, according to Patrick Chovanec, associate professor at Tsinghua University’s School of Economics, is allocation of capital within the county’s financial system. “The old problem was policy-lending. That evolved into collateral-based lending, which brought fixed asset companies into the picture,” he explains. “But it’s left out small, innovative entrepreneurs and even large service companies because banks didn’t have the capacity to assess the profitability.”

Another part of that process, Chovanec believes, is allowing some companies to go out of business. On this front, he thinks the stimulus play may be delaying needed adjustments. “China’s stimulus has been to freeze the status quo, [which is] not a good thing. Part of the shake-out requires companies to go out of business, and part of the shake-up involves companies having to adapt, re-orienting their business toward the Chinese domestic market and developing marketing capabilities they don’t yet have,” he says.

Policymakers are clearly reluctant to let companies fail. The Communist party counts heavily on employment to maintain stability in the country, and party officials are wary of making changes that could result in job losses. But their choices are limited. The banks cannot keep up their current lending levels, and the industries benefiting most from the stimulus package face strong over-capacity risks once the government spending slows.

Jun Ma, China macroeconomist for Deutsche Bank, believes that in coming quarters the government is more likely to depend on unemployment benefits than increased investment. He points out in a recent report: “Policymakers will increasingly realize that there is a much more cost-effective way to deal with the social stability issue than spending massively on public investment projects. For example, to create 5 million jobs via investing in railway projects, it would cost RMB1 trillion, but to cover the unemployment benefits of 5 million unemployed people, it will only cost RMB50 billion.”

Ma predicts that while exports will increase in the coming months, the overall Chinese economy will slow as government-driven investment tapers off. Slowing growth will force some Chinese companies to close and others to adjust, just as Tsinghua’s Chovanec points out. The short-term adjustment could force up unemployment, but the consequences of continuing along the same path will probably be much more severe.

Chinese leaders have in the past shown willingness to make difficult decisions for the sake of long-term benefits, and they will certainly face more challenges as the economy transitions to a consumption-led growth model. The benefits from successfully meeting those challenges will extend far beyond the country’s borders.