This past year has seen a stunning reversal in the fortunes of the world’s biggest banks. After a flurry of eye-popping write-offs during the height of the credit crunch, the banks have been steadfastly rebuilding and refining their businesses. Perhaps surprisingly, then, at just over $62 trillion the total assets of the world’s 50 biggest banks are barely any greater than they were in our 2008 survey. Almost all of the $2 trillion gain is accounted for by the top 10 banks, which between them have a staggering $26.2 trillion in assets. The number of banks with more than $1 trillion in assets has barely grown—from 24 to 25—while the number that boast assets over $2 trillion remained static at eight.

In contrast to previous years, asset growth has been far from uniform. Several of the biggest banks, including perennial table-topper Royal Bank of Scotland and formerly consistent asset leader Citi, saw their assets drop between the end of 2007 and the end of 2008. Those that saw sharp rises in their assets were mostly banks that had grown through acquisition, such as Lloyds Banking Group, JPMorgan Chase and Wells Fargo.

Once again, British banks dominate the top of the table, snagging three of the top five spots. China’s banks continue their relentless march, with four in the top half of the table compared with just one last year. Meanwhile, the Swiss giants—UBS, which fell from eighth to 10th, and Credit Suisse, down from 18th to 23rd—continue their steady slide. 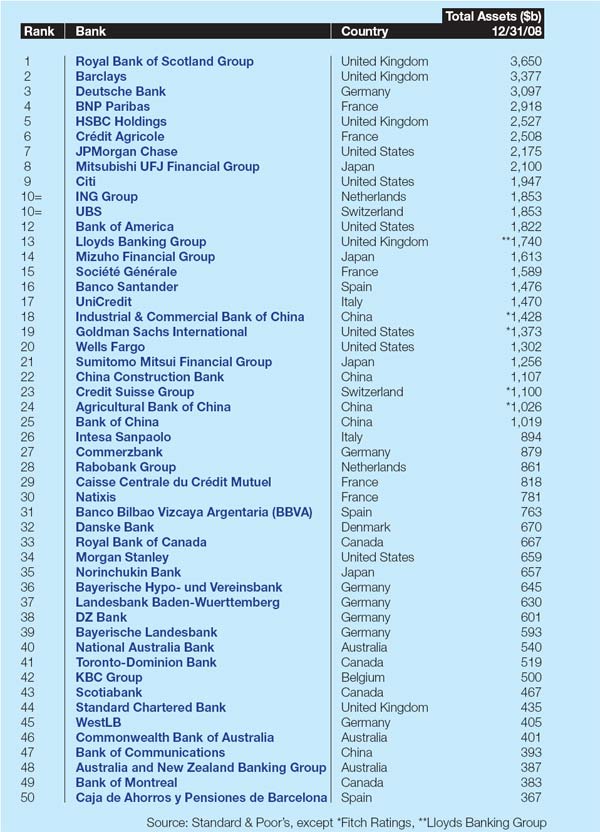