Global Finance selects the world’s safest banks, the 50 institutions with the highest ratings from the leading international credit ratings agencies. 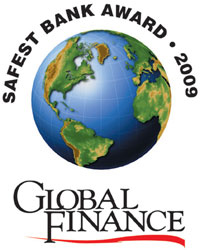 After two tumultuous years that saw many of the world’s most respected banks drop out of the top-50 safest banks list, the dust appears to be settling. Those banks that kept an iron grip on their risk exposure before the financial crisis have consistently topped the table and maintain their standing among the top echelon in this year’s ranking. At the same time, the big-name banks that lost their safest bank ranking during the credit crunch are still absent from the list as they struggle to rebuild their credit standing.

Reassuringly, the very top-ranking banks are mostly unchanged from previous years, but the composition of the rest of the list clearly illustrates the level of upheaval that the global banking and financial world has undergone. The number of banks from tightly regulated countries such as Canada and Australia is growing as those banks displace their peers from the UK and the US. Gone from this year’s ranking are all but two financial institutions from Britain, reflecting the carnage in the UK banking industry over the past year. While the US banks post a much better showing than the UK’s, their collective standing has fallen sharply, and they now feature only toward the bottom of the safest banks list.

Rabobank CFO Bert Bruggink sums up the characteristics that ensure banks appear year after year on the list of the world’s safest: “A robust balance sheet, stable profit growth and a high Tier 1 ratio are prerequisites for Rabobank to be able to sustain our position as one of the world’s safest banks,” he says.

The slump in the credit ratings of many banks opened the door for a new crop of banks to join the ranks of the world’s safest. Newcomers this year include banks from Finland, the UAE and Kuwait, less well-known institutions whose solid credit ratings have put them on a par with some of the banking world’s most recognizable names. As always, we have constructed our ranking based on size and credit quality. We began with a pool of 500 of the world’s largest banks by asset size to which we applied the most recent available ratings from Fitch Ratings, Moody’s Investors Service and Standard Poor’s, with appropriate weightings. Where different banks were rated equally by all three ratings agencies, the largest of the banks was awarded the highest ranking.

How we measure the safety of banks

The safest banks chart compares the ratings for the world’s 50 safest banks, based on long-term foreign currency ratings from Fitch Ratings and Standard Poor’s and the long-term bank deposit ratings from Moody’s Investors Service. Where possible, holding companies have been rated rather 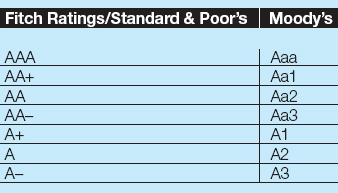 than subsidiary banks, and government import-export finance institutions have been omitted. Within each rank set, banks are rated according to asset size. Ratings are reproduced with permission from the three ratings agencies, with all rights reserved. A rating is not a recommendation to purchase, sell or hold a security, and it does not comment on market price or suitability for a particular investor. Because Moody’s uses different ratings from the other agencies, equivalents are shown in the table on the right.