At the presidential palace in Ankara on July 21, Turkey’s president, Abdullah Gul, met with Global Finance for a wide-ranging interview covering Turkey’s role in the global economy and its international relations. 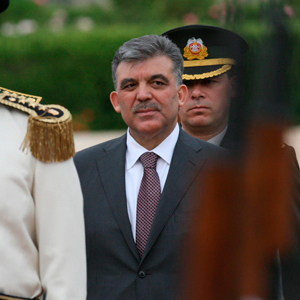 President Gul: In today’s world, everybody is dependent on each other. In that sense, Turkey is important for the European Union, and Europe is important for Turkey. The historical realities of the last 500 years prove that Turkey is actually an integral part of Europe. In the modern day, Turkey’s importance for Europe is recognized in the strategic report of the European Commission. This is not just something that I am saying as the president of Turkey. Before the accession negotiations started, the EU conducted two studies analyzing what Turkey would contribute to Europe. As a result, the consensus of the EU summit of 2004 was to start the negotiations. This recognition by the European Commission and the EU Council was very significant.

GF: How soon must the 2,000-mile Nabucco gas pipeline from the Caspian Sea to Austria, an $11 billion project, be completed?

President Gul: Regarding the Nabucco pipeline, the importance actually is the initiation of the project and the signing of the intergovernmental agreement. As you may recall, when the BTC [Baku-Tbilisi-Ceyhan] pipeline, the second-largest pipeline in the world, was at the project stage, people were debating whether it was feasible. Some even said it was a pipe dream. But the pipeline was built, and the dream of bringing Kazakh oil to the Mediterranean was realized. The same thing will happen with the Nabucco pipeline project. The agreement between the countries [Austria, Bulgaria, Hungary, Romania and Turkey] and the companies involved was signed last week. Now that agreement has been reached, I don’t believe the construction will take too long, because technically it is not a difficult project. The demand is there, and the energy security and safety issue for Europe is a priority. The natural gas that will feed into this pipeline could come from a variety of sources, including the northern countries as well as the southern countries and the Caucasian countries.

GF: What will be the impact of the Marmaray undersea rail tunnel in Istanbul on Turkey’s relationship with Europe?

President Gul: Just as pipelines connect countries in terms of energy supplies, transportation projects are another opportunity to connect countries. In that sense, Marmaray is a very important project. It will be implemented next year. When it is completed, a train will be able to travel from China to London without any interruption. The railways already exist, although certain sections are being renovated. The Kars-Tbilisi-Baku railway [connecting Turkey, Georgia and Azerbaijan], for example, will be completed next year.

GF: Masoud Barzani, president of the Northern Iraq autonomous region, has said that it would like to join Turkey. Do you think he is sincere about this?

President Gul: When you look at it from an economic perspective, the north of Iraq is almost unified with Turkey. My comment should not be misunderstood to mean that the north is not part of the Iraqi state. We have economic ties with all of Iraq, but most of these are focused on the north, and many involve Turkish companies. Of course, Turkey attaches greatest importance to the territorial integrity and political unity of Iraq.

GF: Can the Cyprus issue be decided by the end of this year?

President Gul: Yes, we do hope that settlement will be achieved by the end of this year. It is one of our greatest wishes. Actually, a great chance was missed in 2004, when the United Nations’ plan, known as the Annan plan [after former UN secretary general Kofi Annan] was put to referendum in both sides of the island. It was rejected by the Greek side and approved by the Turkish side. With regard to the new round of negotiations [which began in September 2008], we have the greatest desire to see the issue resolved. Our vision is that if the Cyprus issue is resolved, then Turkey, Greece and the Cyprus island as a whole could form a very important economic zone in the eastern part of the Mediterranean.

GF: How have US-Turkey relations changed under US president Barack Obama? What will your role be in the Middle East peace process?

President Gul: First of all, I would like to indicate that independent from whoever is in the administration, Turkish-US relations for the past 50 years have been based on solid principles. In all areas, we have a very strong partnership. The global vision of President Obama overlaps with the Turkish perspective regarding these issues. For that reason, we do believe that we are entering into a stage where our cooperation will be much closer and the relationship will be strengthened. Soon after President Obama assumed office, he paid one of his first visits to Turkey, and we had the opportunity to discuss both our bilateral as well as regional cooperation. Regarding a peaceful settlement in the Middle East, the Turkish contribution is very important because we have a relationship with all the parties in the Middle East conflict. And we have close contacts with the Arab countries as well as Israel on this issue. Turkey actually organized the negotiations between Israel and Syria. It was an indirect involvement. Turkey will continue to support and take part in all efforts aimed at achieving peace in the region. In this regard, we welcome the efforts of President Obama.

President Gul: We see no person as an obstacle in the negotiations, which we started with a decision in which both France and Germany participated. We are continuing the negotiations in a very determined manner. There will always be ups and downs and differences of opinion in talks like these. But the legal framework is set and is binding. We have focused on completion of successful negotiations during this whole process.

GF: Can you give a time frame for the likely completion of Turkey’s EU membership bid?

President Gul: Of course, it would not be right to give any time frame regarding this negotiation process. But when we look at past developments regarding the bigger countries, the process has always taken longer. For Spain and the United Kingdom, for example, it has taken 10 to 12 years. And in addition for the UK, France has vetoed UK membership twice. So, what is important for Turkey is to complete its preparations and to maintain a certain momentum.

GF: How are Turkey’s relations with China and the more than 9 million predominantly Muslim Uighur people living in China’s Xinjiang region, its westernmost province?

President Gul: China is a big country in terms of its population and its economic potential, as well as global politics. There have been historical ties between Turkey and China, and today our relations are on very good terms. In fact, I recently paid an official visit to China at the invitation of President Hu [Jintao]. We had very fruitful deliberations and even concluded some agreements. We decided to further intensify our economic cooperation. I traveled to different regions of China, including various cultural and industrial centers. I also had the opportunity to visit the autonomous Sincan-Uighur region and its capital, Urumqi. The Uighur people living in that region are Muslim, with a Uighur and Turkic ethnic background. Turkey respects the territorial integrity of China. We know that China is a multi-ethnic and multi-religious society. We want all Chinese citizens to be treated on an equal basis. The Uighur people enrich the diversity of China, and we would like to see them living as happy and prosperous citizens of China. We want them to be satisfied with the development of human rights and fundamental rights and freedoms in that region. And we regard the Uighur people as a bridge between China and Turkey, enhancing further cooperation between the two countries.

GF: What is Turkey’s perspective on the global financial and economic crises?

President Gul: The global economy is experiencing a period of extraordinary crisis. Turkey has met the crisis well prepared and stronger due to the serious measures taken in recent years in terms of macro-economic policies and structural reforms. Fiscal discipline, reform of the banking system, progress in privatization, the opening of major sectors of the economy to competition, and a floating exchange-rate regime have all provided the Turkish economy with an important degree of flexibility. However, because of the level of integration with the world economy, which has increased noticeably in the last few years, Turkey was not exempt from the adverse influences of the crisis. Therefore, it took necessary measures to stabilize the economy, including reducing taxes, offering financial aid to the unemployed, providing low-interest loans to small and medium-sized enterprises, increasing infrastructure investments and allocating more financial support to local administrations. Another stimulus program was announced in June, including new incentives for investment. A new employment package will provide approximately 500,000 jobs in the private sector over the next six months.

With these measures implemented, we believe that once the global economic recovery begins, Turkey will be among the fastest-growing economies. Taking into account the global dimension of the crisis, it is crucial to adopt necessary [stabilization] measures with a spirit of global cooperation and coordination. Therefore, Turkey will continue to contribute to all international efforts to ensure the recovery of the world economy.