In his second term, Peru’s president Alan Garcia is making amends for the shambles he left his country in after his first term. 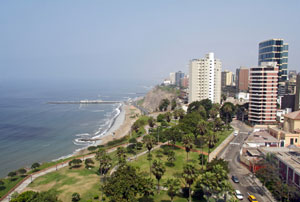 Peruvian president Alan Garcia is leading one of the world's most impressive political and economic comeback stories. While his first term ended in 1990 with an economy in shambles, his return to power in 2006 has led to one of Latin America's most impressive economic recoveries. With the nation's economy expected to grow substantially this year, the "new and improved" Garcia's pro-market policies have put Peru firmly back on the map for international investors.

Garcia, once known as the "crazy horse" for his economic and political blunders, had been remembered as the president who caused the nation's economy to plunge by 10%, pushed inflation to 7,000% and defaulted on $14 billion worth of debt. When his term was over, he went into exile in Colombia and France for nearly nine years. Yet, since his election to a second term four years ago, Peru has enjoyed a strong economic recovery, boosted international reserves to more than $40 billion and received its first investment grade rating.

Peru hasn't been immune to the turmoil in the global markets, though. Last year the economy barely grew at all, turning in a meager 0.9% GDP increase. This year looks considerably better: The central bank recently revised its 2010 forecast upward to between 7.5% and 8%, from a previous 6.6%. Though copper, gold and commodities account for 75% of Peruvian exports, noncommodity sectors are driving growth this year. In July the economy grew 9% year-on-year, although within that there were vast disparities between different sectors. Mining and oil grew only 0.6% while manufacturing grew 17%, construction 12%, finance and insurance 12%, and electricity and water 11%. The nation's economy expanded by 8.2% during the first half of the year, making it one of the region's most dynamic. Morgan Stanley predicts 6.4% growth next year.

"Peru's economy has benefited from strong export-driven growth mostly because of its unique industrial mix focused mostly on copper, gold and zinc mining," says Andrew Karolyi, professor of finance and global business at Cornell University's Johnson School of Management. "China, with its voracious appetite for resources, is a major trading partner. I do not think this is a transitory phenomenon, but it will not be sustainable at this unusually high rate of growth."

While the elevated growth levels might not last in the long term, the Garcia administration is concerned that things may be getting out of control in the short term. "There is a danger of overheating, but we don't see it yet," the central bank's president, Julio Velarde, told participants at a conference in Lima in July. "If private spending starts to rise in an exaggerated way, obviously we will have to withdraw the monetary stimulus that we've had until now."

The central bank has been gradually applying the brakes on the economy and did so again last month, hiking its benchmark interest rate for the fifth consecutive month. Rates are still relatively low, at 3%, but bank reserve requirements have also been upped four times after private credit grew by 16% during the second quarter, compared with the same period last year. Marginal reserve requirements for foreign banks were doubled in September to 120% of short-term sol deposits. Peru was only Latin America's second country, after Brazil, to boost borrowing costs this year. Goldman Sachs predicts the benchmark rate will end the year at between 4% and 4.25%.

Higher interest rates are expected to push companies to pursue bond issues as a financing alternative. Corporate bond registrations were up 35% year-on-year during the second quarter of the year. The outcome could be a deepening of the country's capital markets.

The central bank has purchased nearly $8 billion to halt the currency's strengthening on the heels of hefty capital inflows. It also increased the amount of assets that local pension funds can hold abroad to 30% from a previous 28%, with the hopes of sparking dollar demand and weakening the sol. Exporters have expressed concerns over the currency's strength against the dollar. 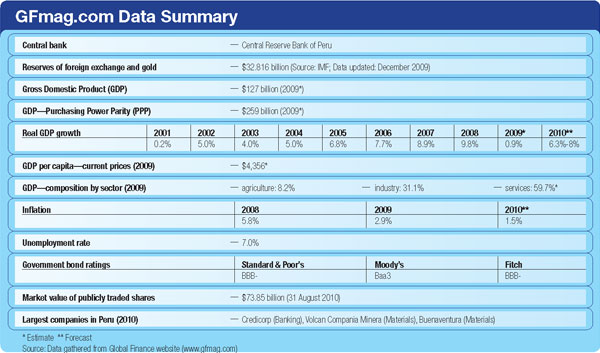 Inflation has remained under control. Although consumer prices rose 2.31% year-on-year to August, the highest rate in a year, the increase is still within the government's 1% to 3% target. Yet, some analysts contend the economic boom will pose a challenge for the administration. In a note to clients in September, Goldman Sachs economist Alberto Ramos warned that inflation could break through the official target by year-end.

A Delicate Balance
Much of the economic challenge will need to be handled by Ismael Benavides, Peru's new finance minister, appointed by Garcia as part of a cabinet shake-up in September. Benavides is Garcia's fourth finance minister in as many years. He replaces Mercedes Araoz, who held the post for only eight months. Araoz had been criticized by the central bank for allowing public spending to rise by 65% during the first half of the year. She countered by charging that the central bank's rate hikes could attract speculative investors and spark foreign exchange volatility.

Benavides is a former head of Interbank, Peru's fourth-largest bank, and was most recently a senior adviser to US-based CF Industries, the world's second-largest nitrogen fertilizer producer. CF Industries is investing $2 billion in a local plant. Benavides holds engineering and business administration degrees from the University of California at Berkeley.

Keeping inflation in check will be tough, but curbing government spending may be Benavides' biggest task: Garcia submitted a $31.6 billion budget for 2011, up from last year's $29 billion. Legislators are scheduled to vote on the budget in November. Peru's fiscal deficit was 2% in 2009, and the government hopes to cut it to 1.5% this year, to 1% in 2011 and, if all goes well, to post a fiscal surplus by 2013.

Benavides is trying hard to manage the expectations of both his political masters and Peru's population. "We are in an uncertain international environment and must be cautious, which is why we have to manage the economy prudently and must save for a rainy day to face any possible external shocks," Benavides said. "While we have a small deficit that is perfectly manageable, we must now move towards consolidating the fiscal situation."

Exports Fuel Growth
Peru's economic story is gaining fans far beyond the country's borders, and foreign investors are flocking to Lima. Bank of America estimates FDI will hit a record $8.4 billion next year. While leftist regimes in Venezuela, Bolivia and Ecuador have seized foreign oil assets, investors are lured by Peru's pro-business administration, lower royalties and flexible contract terms. Xstrata, the global mining group, plans to invest $4.2 billion at its Las Bambas copper mine, Peru's largest-ever investment project. Spain's Repsol YPF and Brazil's Petrobras are investing $9 billion in Peruvian oil and gas projects. Dallas-based Hunt Oil is investing $1.5 billion this year and $7.5 billion by 2016 in an LNG plant, along with partners Repsol YPF and South Korea's SK Group. Investments could make Peru a gas supplier to Chile, Argentina and Brazil, having already made shipments to Mexico and Canada this year.

Peru, which has had a free trade pact with the US since last year, completed a free trade agreement (FTA) with China in March and plans to open a fourth round of talks for a similar pact with Japan. It also signed an FTA with South Korea this year.

Banks are benefiting from the boom. Lending increased 19% year-on-year through July, to a record $35.9 billion. The increase was driven by private investment and increased consumer spending. Banco de Crédito del Perú (BCP), the country's largest bank, with a 35% market share of sector assets, successfully issued $800 million of 10-year, dollar-denominated, fixed-rate notes this year, with proceeds earmarked for on-lending and general corporate purposes. The issue was rated BBB by Fitch. "The banking sector in Peru is solid," says Roy Nelson, professor of global studies at the Thunderbird School of Management. "Peruvian banks are more conservative in their lending and have more-effective regulations than US banks did before the US financial crisis."

The sovereign is rated BBB- by Fitch and Standard & Poor's, and Baa3 by Moody's. S&P; lifted the outlook on its rating from stable to positive on account of the country's economic growth and improved debt ratio. S&P; expects net general government debt to hit 16% of GDP by end-2010, which is half that of the BBB median. "Peru's ratings incorporate high government financial strength reflected in a strong commitment to conservative policies that have led to moderate government deficits and declining debt ratios," said Moody's senior vice president Mauro Leos when the ratings agency issued its annual report on Peru in August.

Despite the country's economic recovery, Garcia's popularity ratings are low and dropping. According to polls by local polling firm Ipsos APOYO, the president's popularity rating fell from 58% shortly after he took office to 29% in March and 26% in May. Critics blame allegations of corruption, deteriorating security and high poverty levels for the decline. Poverty stands at near 35% of the population, according to the United Nations Commission on Latin America and the Caribbean.

"Given [Garcia's] lack of support within the Peruvian Congress, it's unlikely that he can make many reforms in the time remaining before the presidential elections in April 2011 and when the new president takes office in July 2011," notes Nelson. Investors are concerned that, though Garcia cannot seek reelection, his weak support could boost the candidacy of leftist candidate Ollanta Humala, who opposed the FTA with the US and vows to renegotiate contracts with foreign mining companies. While Humala, who lost to Garcia in a 2006 run-off, is unlikely to win the presidency, any advances in his campaign will impact the country's financial markets.

Garcia is not concerned. After all, by the end of his second term the country will probably be in the best shape it has been in for decades. Moreover, his legacy has been substantially improved. He might even be welcome to remain in the country after he steps down as president this time.