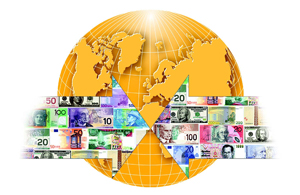 The world economic recovery may be slowing more rapidly than previously expected, according to the Organization for Economic Cooperation and Development. Growth in the Group of Seven developed economies will slow to an annual rate of 1.5% in the second half of 2010, although the loss of momentum is temporary and a double-dip recession is unlikely, the Paris-based OECD says. What does this mean for the most widely traded currencies? "We suspect a further slowing of global growth would be beneficial to the dollar, even though the US is leading the slowdown," says David Woo, head of global rates and currency research at Bank of America Merrill Lynch. In the past 10 years, the dollar has gone from being a pro-cyclical currency to a countercyclical one, Woo says. The only other major currency that exhibits a pronounced countercyclical pattern is the Japanese yen.


There were widespread signs of a deceleration in US economic growth during August, according to the latest reports from Federal Reserve banks across the country. Meanwhile, the combined gross domestic product of the three largest countries in the euro area is projected to grow at only a 0.4% rate in the third quarter and 0.6% in the fourth quarter, the OECD says.


If the slowdown in the economy becomes entrenched, and the risk of downturn increases, additional monetary stimulus in the form of quantitative easing and keeping interest rates close to zero for a longer period may be necessary, says Pier Carlo Padoan, OECD chief economist. "But it is unlikely that we are headed into another downturn," he says.


The fact that the scope for additional policy stimulus is limited should help contain the downside risk for the dollar, says Woo of BofA Merrill Lynch Global Research, based in New York. "We believe that a loosening of fiscal policy is not always good for the home currency," Woo says. "Indeed, our analysis shows that, all else being equal, a one percentage point increase in the US government debt-to-GDP ratio has been associated with a half percentage point weakening of the dollar's trade-weighted index since 1975."


The US mid-term elections will be critical for the dollar, Woo says. If the Democrats were to lose control over the House of Representatives, a political impasse could follow that could lead to at least a temporary expiration of all of the tax cuts enacted in 2001 and 2003 under the Bush administration. "To the extent that this scenario is clearly very bearish for cyclical assets, it would be very positive for the dollar," Woo says. History suggests that power sharing between Republicans and Democrats may be good for the dollar, he says.


Republicans are calling for an extension of all Bush tax cuts, and if a November victory for the Republicans were to result in little or no fiscal tightening in 2011, this would be very bearish for the dollar, Woo says.

Weak Euro Boosted Exports
Growth in the euro area has been stronger than expected in recent months, but this was only because the market underestimated the positive impact of the dramatic depreciation of the euro on the region's exports in the first half of 2010, according to Woo. "With the euro having stabilized, it is unlikely that the decoupling of the euro zone will be sustainable, especially as the fiscal tightening among the peripheral countries is starting to kick in," he says.


Coming back from the Labor Day holiday in September, US investors were caught a bit off guard by the reversal of sentiment toward Europe, according to Marc Chandler, global head of currency strategy at Brown Brothers Harriman, based in New York. The euro had rallied ahead of the holiday on stronger than expected US employment data for August, ostensibly on a greater appetite for risk, Chandler says. The rally didn't last, however, amid anecdotal stories about empty shops in Greece and concerns over the governments in Belgium and the Netherlands, he says. Irish bank solvency also re-emerged as a key issue.


As the summer began, two of the dollar's supports gave way, Chandler says. The European financial crisis eased, and the US economy began to lose momentum. "The vulnerability of the US economy was sufficiently obvious that the Federal Reserve adopted what is essentially an easing bias and will resist a passive contraction of its balance sheet," Chandler says. Meanwhile, the Obama administration unveiled a new infrastructure renewal, business development, and job-creating package. Its approval by Congress, however, was in doubt ahead of the mid-term elections.

Distorted Perceptions
"The uncertain policy environment and the volatility of both financial prices and economic conditions may be creating gaps between appearances and reality," Chandler says. "All is not what it seems to be." The contrast may be the starkest in Japan, he says. The yen has been the strongest of the major currencies, reaching a 15-year high against the dollar, although this is hardly a reflection of strength in the Japanese economy or confidence in the country's policy makers, Chandler says. The yen has appreciated by 40% on a trade-weighted basis over the past two years, and Japanese policy makers seem at a loss as to how to address the strength of the yen, he says.


Just as the yen's strength does not reflect strong positive developments in Japan, the euro's recovery does not mean that Europe's fundamental problems have been truly resolved, Chandler says. European officials successfully addressed the dramatic liquidity crisis of the spring, but the underlying solvency issue has not gone away, he says. The premium that peripheral European countries pay over Germany has widened, surpassing the highs of last spring, while the price of insuring against default soared by a record amount in several countries.

Depths of Pessimism
Back in the US, the surprisingly poor July durable goods data may have marked the nadir of pessimism, Chandler says. The above-consensus jobs report for August, coupled with upward revisions of previous months' data, may be the first convincing data that the economic expansion is continuing, he says. The US deflation risk prevails, despite the Fed's guarded optimism and the recent improvement in some economic data, such as the employment report, says David Gilmore, partner and economist at Foreign Exchange Analytics, based in Essex, Connecticut. A second round of quantitative easing, known as QE2, seemed imminent until Fed chairman Ben Bernanke addressed the Kansas City Fed's annual symposium in Jackson Hole, Wyoming, at the end of August, he says. "His message was that we [Fed policy makers] are not in a rush to start QE2 and are content to patiently wait for more data to get a clearer picture on the US economy—is the economy double-dipping or simply in a temporary soft patch?" Gilmore says. 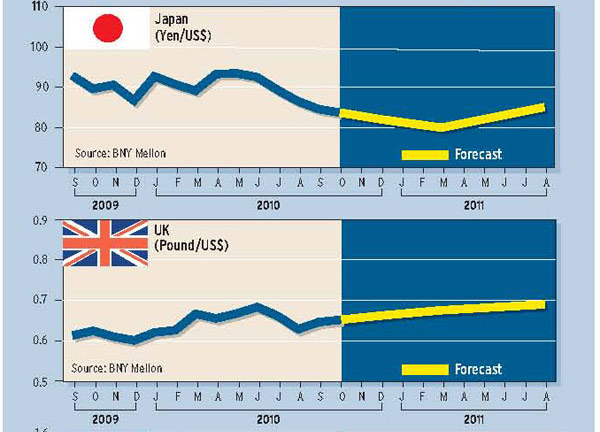 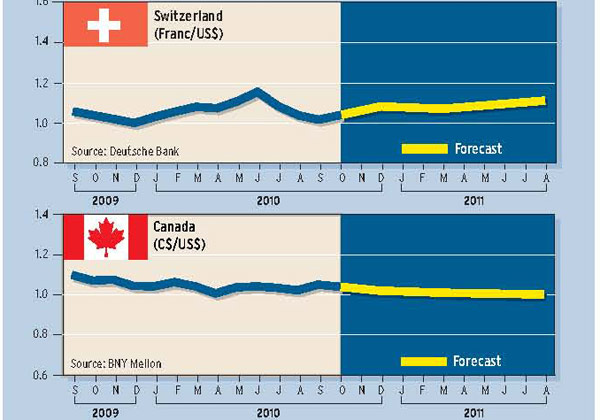 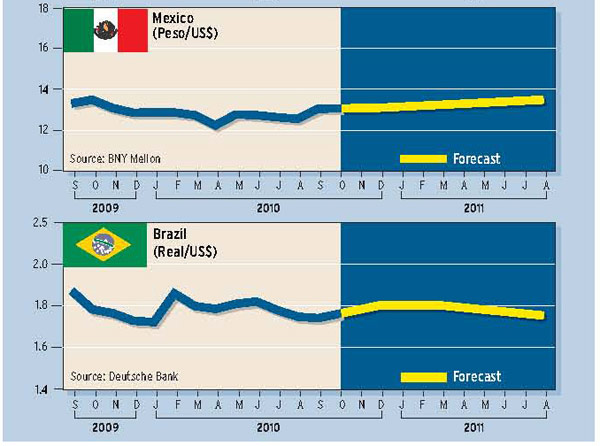 Gilmore believes the balance of risks is still squarely with deflation and that the US economy is in a soft patch, or possibly even quicksand. "We are a long way from out of the woods when it comes to deflation," he argues.


The minutes of the Federal Open Market Committee's August meeting shed additional light on the Fed's decision to reinvest maturing mortgage-backed securities into US treasuries. The minutes make clear that the decision to reinvest was primarily driven by the speed of redemptions, and not a significant worsening of the US economic outlook, according to Aroop Chatterjee, currency strategist at Barclays Capital, based in New York. Although staff projections for economic growth in the second half of 2010 were lowered, the FOMC continued to expect a moderate strengthening of the recovery in 2011, Chatterjee says.

Credit Markets Impaired
The past summer brought some remarkable developments in financial markets, says Michael Woolfolk, senior currency strategist at BNY Mellon, based in New York. "While we avoided a renewed outbreak of crisis in Europe, disappointing economic data in the US and abroad have weighed on global equities," Woolfolk says. Market participants sought safety in the US treasury market, pushing the 10-year yield below 2.5%. "Unfortunately, credit markets remained impaired, as banks chose to borrow at effectively zero interest rates and invest in US treasuries, rather than create new loans to stimulate the economy," he says. While US banks are not earning a high rate of return on this strategy, access to virtually unlimited borrowing makes this a risk-free arbitrage, he adds.


"In an environment of heightened uncertainty on all fronts, banks have no incentive to extend credit to consumers and small businesses," Woolfolk says. "Keeping interest rates at zero is not the solution; it is the root of the problem."


The unintended consequences of a zero-interest-rate policy include growing uncertainty in financial markets, a collapse in bond yields to record lows, and a continuation of frozen credit markets, Woolfolk says. "Raising interest rates would remove this incentive to invest in ultra-low-yielding treasuries, and stimulate new lending," he says. "The thawing of credit markets would, in turn, support consumer spending, business investment and ultimately US economic growth and employment."


The risk-on and risk-off trading patterns in financial markets have carried over from the summer into the fall, Woolfolk says. Any renewed concerns over Europe could provide additional support for the safe haven currencies, including the dollar, the yen and the Swiss franc, he says.


The US trade deficit narrowed more than expected in July, and the slowdown in US growth and weakness in the dollar over the summer are expected to curb imports and to keep the trade deficit below the $50 billion level, Woolfolk says. While the July trade report, released in September, was a positive surprise, the problem remains the lack of Chinese demand for US exports and the continued dependence of the US on foreign crude oil, he says. 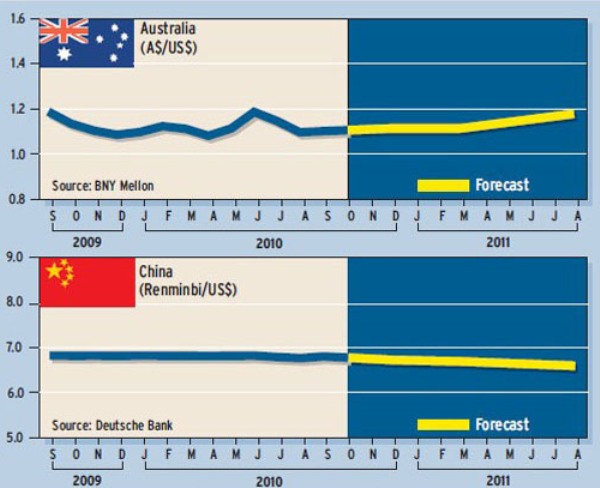 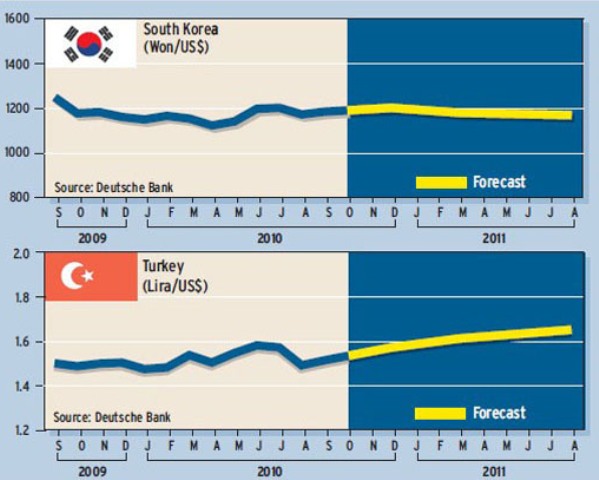