After a tumultuous three years, characterized by colossal write-downs, credit ratings downgrades, nationalizations, bailouts and hurriedly arranged mergers, the world's biggest banks are beginning, once again, to enjoy calmer times. But while the people running the banks may well be heaving a huge sigh of relief, some serious damage has been done. All but a handful of the banks at the top of the Global Finance World's Biggest Banks list have seen their assets fall over the past year. The top 10 banks have seen $3.2 trillion hacked off their combined balance sheet, giving an idea of the severity of the carnage at the top of the table. It appears the spoils are accruing to the upstarts, though, as the total assets of the top 50 as a whole barely budged at $61.8 trillion.

With Deutsche Bank having dropped out of the top five this year, the head of the table has become a two-horse race. Britain, with three of the top five, is leading France, but France's BNP Paribas, which has been clambering up the table for the past few years, has finally clinched the top spot—despite posting only a paltry 1.5 increase in assets.

China's banks, meanwhile, are continuing their long march up the league tables. The country now has six banks among the world's biggest 50, accounting for a hefty $6.9 trillion—more than 10% of the assets of the top 50. China's biggest bank, ICBC, rocketed up the league this year from 18th to 11th. Perhaps 2011 will see China breaking into the top 10. 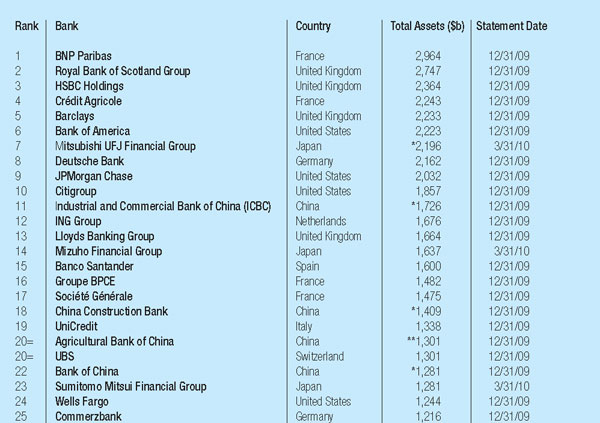 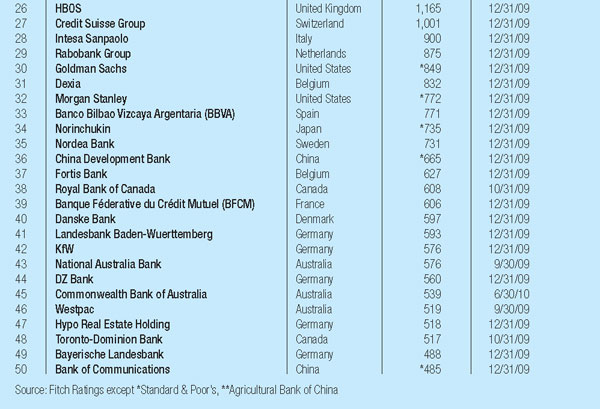