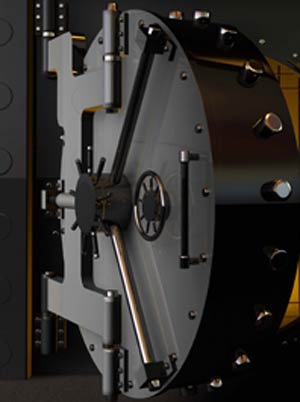 It is a measure of how much stability has returned to the global banking industry that this year's list of the world's 50 safest banks is remarkably similar to last year's. Bar a bit of jockeying for position, the safest 20 banks remain practically the same as a year ago. Within the top 20 there has been some shuffling—for example, a pair of downgrades served to knock BNP Paribas out of the top 10 and down to 18th place.

Rentenbank, a perennial feature at the top of the safest banks list, attributes its longstanding trio of triple-A ratings to its government backing—a characteristic shared by several of the world's safest banks. "The backing by the Federal Republic of Germany as one of the strongest sovereigns in the world is an extremely valuable asset in times of uncertainty. It underpins the safety and great relative value we offer our investors, says Horst Reinhardt, a member of Rentenbank's board of managing directors.

Topping the table for the second year running is Germany's KfW, which also has an explicit government guarantee. CEO Ulrich Schröder says, "KfW has a strong liquidity position and capital base. As one of the leading and most experienced promotional banks in the world, KfW benefits from a direct and explicit guarantee from the Federal Republic. We use our knowledge and our strength to improve economic, social and ecological living conditions."

Rabobank's CFO Bert Bruggink says the bank's clients believe the award validates the trust they place in the bank, adding, "The award is a confirmation of Rabobank's strong capital position, robust balance sheet and continuous strong results during the recent years."

While the standings of the banks in the top 10 have barely changed in the past year, further down the list there have been more changes, particularly as banks have built credibility—and their credit ratings—in the wake of the credit crunch. Upgrades from S&P; and Moody's sent Switzerland's Credit Suisse soaring from 43rd place last year to 26th this year, but a double downgrade from Moody's pushed Deutsche Bank down 11 places to 39th.

Nordic banks have suffered across the board with Sweden's Nordea and Svenska Handelsbanken each tumbling by six places to the upper 20s from the lower 20s and Finland's Pohjola Bank slipping six places on a downgrade from Moody's. Norway's DnB NOR dropped off the list completely—a fate shared by Portugal's Caixa Geral de Depósitos, its abrupt departure from the safest banks list reflecting that country's financial woes. 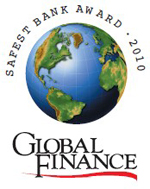 With Western European banks tightening their stranglehold over the global safest banks list this year we have, for the first time, listed safest banks by region. The regional breakdowns reveal some clear trends, with Singapore's banks clearly outstripping Japan's as the safest in Asia, and Chile's banks dominating the Latin America safest list. Perhaps not surprisingly, Canada's hold sway in North America, while Saudi Arabia's banks have eked out a similar numerical advantage in the Middle East, although Kuwait and the UAE boast the only two banks from the region to make it onto the global top 50.

As always, we have constructed our rankings based on size and credit quality. We began with a pool of 500 of the world's largest banks by asset size to which we applied the most recent available ratings from Fitch Ratings, Moody's Investors Service and Standard & Poor's, with appropriate weightings. Where different banks were rated equally by all three ratings agencies, the largest of the banks was awarded the highest ranking. 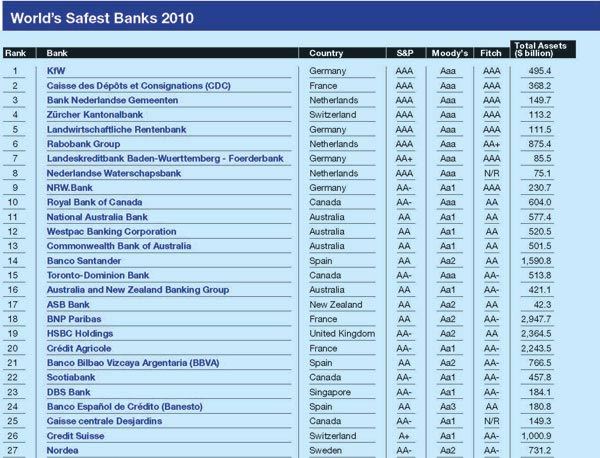 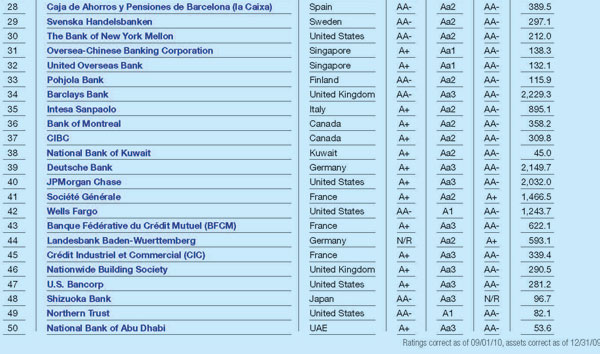