Debt: No Spike In Corporate Defaults

Credit spreads widened dramatically during the turmoil in the credit markets this summer as the global economic outlook worsened, Standard & Poor’s stripped the US of its triple-A credit rating, and the sovereign debt crisis in Europe contributed to volatile financial markets.

But analysts say it is unlikely that there will be an increase in corporate default rates in the next 12 months.

“Despite the deterioration in market conditions and the slowdown in US growth, we still do not expect a near-term spike in default rates,” says Bradley Rogoff, New York–based head of US credit strategy at Barclays Capital.

The high-yield market fell sharply in mid-August, as bank-solvency concerns were added to the volatile macroeconomic mix, Rogoff says. Although spreads widened to levels last seen a little more than a year ago, the market is not in uncharted territory, he says.

What’s more, only 9% of outstanding high-yield debt matures prior to the end of 2013, and even that amount is skewed heavily toward higher-quality issuers, Rogoff says. “Given a low forward-12-month default projection—we are still using 2%—the rise in spreads has caused a significant increase in non-default or liquidity compensation,” he says.

Near-term default risk remains minimal, even in a downsized economic scenario, according to Rogoff. “Yields are higher than earlier this year, but stability at these levels would allow high-yield companies eventually to refinance at rates that are tolerable, if not ideal,” he says. 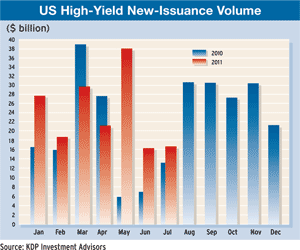 As of August 18, the global corporate default total for 2011 was 23 issuers, compared to 56 global corporate issuers that defaulted by the same time in 2010, according to Standard & Poor’s. Of the defaulters this year, 15 were based in the US, three were from New Zealand and two were Canadian. The remaining three were Czech, French and Russian.

Standard & Poor’s says it expects the US corporate trailing 12-month speculative-grade default rate to decline to 1.6% by June 2012 under its baseline projection. Stronger credit quality, as reflected by fewer downgrades, should help companies mitigate the effects of lackluster economic growth and uncertainty about domestic and international sovereign funding, the rating agency says.

The turmoil is affecting the volume of debt sales, particularly in the high-yield bond market. While investment-grade issuance remained strong this summer, US high-yield bond issuance in June and July averaged less than $16.5 billion for each month, down from $38.1 billion in May, according to Montpelier, Vermont’s KDP Investment Advisors. 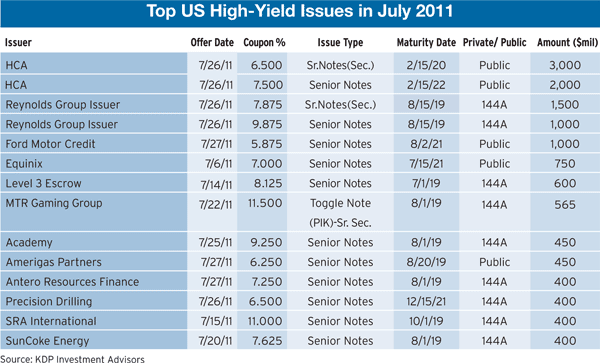