The recent volatility in global equity markets and the heightened uncertainty around the global economic outlook forced a virtual shutdown of the market for initial public offerings in early August, just as the IPO market was preparing for one of its busiest weeks in almost four years. 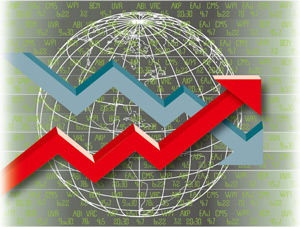 The turbulence led to 11 IPOs being postponed in a single week, the most since the dotcom bubble burst in 2001.

“At the close of the second quarter, we were optimistic that the proceeds from IPOs [in the US] completed in the second half of the year would lead 2011 to eclipse the full-year 2010 proceeds of $39 billion,” says Henri Leveque, leader of consultancy PwC’s capital markets and accounting advisory practice. “However, disruptions in the overall market and a variety of recent macroeconomic events may present considerable challenges for companies looking to execute an IPO in the coming months.”

Some 79 IPOs generating $24.3 billion in proceeds were completed in the US market in the six months ended June 30, 2011—more than double the amount raised in the same period a year earlier. The US IPO market appeared to be headed for its most active year since 2007. However, increasing uncertainty surrounding the global economy may affect investor appetite for IPOs in the short term, hindering continued momentum in the US IPO market, according to PwC.

The Chicago Board Options Exchange S&P; 500 Volatility Index (VIX), which measures the market’s expectation of 30-day volatility based on option prices, is a key indicator of investors’ appetite for IPOs.

Also known as the fear index, the VIX jumped 50% to a reading of 48 on August 8—the biggest surge since February 2007—then fell 27% the next day for the second-largest drop. The VIX has moved in the opposite direction of the Standard & Poor’s 500 index about 85% of the time in the past two years.

The lowest volatility in recent years was at the end of 2006, when the VIX approached 10, coinciding with a high point for historical IPO activity. According to PwC, the current jump may be a cause for immediate concern, but it doesn’t come close to the October 2008 VIX high of 89, when IPO activity was at an all-time low.

Short-term market events typically should not affect the process companies go through to prepare for an IPO, PwC says. “Companies that successfully execute an IPO in the coming months will have taken a long-term approach and undergone careful planning, thereby helping them to be ready to successfully navigate unforeseen market events,” Leveque says. “No one can predict when the window will open or shut, however, companies that are well-prepared will have the flexibility needed to take advantage of market conditions and be able to access the IPO market when the timing is right.”

Meanwhile, capital raisings using depositary receipts nearly tripled in the first half of 2011, compared to the same period a year earlier. “The current DR pipeline for IPOs is significantly stronger than at the same time last year, pointing to a positive long-term sentiment across the broader capital markets,” says Vikas Taimni, global product manager, depositary receipts, J.P. Morgan Worldwide Securities Services, who is based in Hong Kong. “While some issuers have chosen to temporarily delay their IPOs as a result of recent market volatility, we haven’t seen any issuers canceling their IPO plans.”

Issuers are just waiting for the right time, according to Taimni. “Once global markets stabilize, we would expect to see the IPO market pick up quite quickly,” he says.

China and Russia are the two largest DR IPO markets, so it is not surprising that there has been a temporary pause in activity as a result of the volatility in these markets in recent weeks, Taimni says. However, the broader market’s enthusiasm for capital raising remains strong in the Asia Pacific region and other markets globally. “Our DR business continues to receive at least three new RFPs [requests for proposals] each week,” he adds.

Chinese streaming video website Tudou priced its IPO on August 16, raising $174 million in a successful offering. This was the first Chinese ADR (American depositary receipt) IPO since June to price successfully. “This is encouraging, and we expect to see several more IPOs come to market as the macro environment stabilizes,” Taimni says. “From what we are seeing so far, 2011 could even be better than 2010.”

Despite the current market uncertainty, Asia continues to emerge as a global center of growth, Taimni says. China will continue to be a long-term driver of growth for the region, he says. “From a DR perspective, we expect at least 20 to 25 Chinese companies to tap international markets each year through DRs to meet their capital-raising requirements.”

An economic slowdown in the US and Europe may have some impact on the export-dependent, smaller emerging markets, but the larger BRIC countries (Brazil, Russia, India and China) likely will remain generally resilient, according to Taimni. “The BRIC countries have dominated DR fundraising in recent years, and we expect this trend to continue, especially with Russia and China, over the next 12 to 24 months,” he says. “We also expect to continue seeing deal flow from smaller DR markets like Taiwan and Ukraine, select opportunities from Colombia and Peru, the Middle East and sub-Saharan Africa and Georgia.”

The main sectors for DR issues likely will include mining, oil and gas, banks and financial institutions, and Internet-related companies. “We may also see some US and Western European companies raise capital in Asia through an HDR listing on the Hong Kong Stock Exchange,” Taimni adds.

Shanghai-listed Citic Securities was expected to go ahead with a planned Hong Kong listing as Global Finance went to press. The Beijing company, which has a strong retail brokerage business and investment banking activities in China, was looking to issue up to $2 billion worth of shares.

Manchester United, the UK soccer club, was preparing to sell shares in an IPO on the Singapore Exchange later this year. Many of the club’s fans are in Asia. Manchester United was planning to raise about $1 billion in the sale.

Rapid growth in unsponsored ADR programs is providing investors with expanded options to diversify their investments, according to BNY Mellon. As of June 30, 2011, the BNY Mellon Composite Depositary Receipt Index was comprised of 1,025 depositary receipts for issuers from 49 countries. That represents an increase in coverage of more than 20% since the index was created in October 2009, the bank says.

“The growing acceptance and use of unsponsored ADRs allows us to satisfy investors’ diversification demands, and that’s reflected in the greater breadth of country and regional coverage provided by our family of DR indices,” says Michael Cole-Fontayn, chairman of Europe Middle East & Africa at BNY Mellon and CEO of the bank’s DR business.

“There are now more DRs outstanding and trading more actively on more stock exchanges and platforms than at any other time in the history of this product,” Cole-Fontayn says. During the first half of 2011, some 80.5 billion DRs valued at a record $1.91 trillion, were traded. 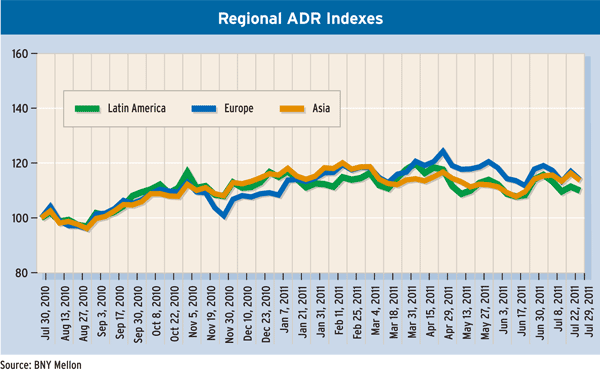