Safe-haven buying drove US bond yields to the lowest level since 1950, and the dollar rose as the tumultuous summer of 2011 drew to a close with no solution in sight to the twin banking and debt crises in the eurozone.

The dollar would be in rough shape right now were it not for the sovereign debt problems in Europe, says Scott Boyd, currency analyst in Toronto at Oanda, a firm that provides currency data and online foreign exchange trading services. “This is because the dollar remains a safe haven,” he notes. “Where else are you going to put your money?”

“The eurozone is facing a default crisis and a re-profiling of debt,” Boyd explains. “The prospects for Italy are grim.” Italy’s public debt is 120% of GDP and accounts for 23% of all eurozone sovereign debt. Even though Italy’s budget deficit is among the lowest in the eurozone, at about 4% of GDP, the government’s borrowing costs have hit record highs, and a large proportion of the outstanding debt is coming due. Italy will need to refinance an amount equivalent to 20% of GDP next year, according to the International Monetary Fund.

“Italy could prove to be the downfall of the euro because of the country’s massive debt load,” Boyd says. As the third-largest economy in the eurozone, Italy is much larger than Greece, and the European Financial Stability Facility would have to be increased dramatically to raise enough funds in capital markets to keep Italy from defaulting, he says.

“The euro will be at a crisis point in about four to six months, not that it is far from it right now,” Boyd says. Free-market economist and statistician Milton Friedman said in 1999—as the euro was about to be launched—that he did not believe the eurozone could last 10 years. “Friedman may have been off by a few years, but it will be a real challenge to hold the eurozone together,” Boyd says.

German chancellor Angela Merkel’s coalition government is under pressure, and members of her own party are revolting against more costly eurozone fiscal supports, according to Boyd. “A huge backlash is developing against the euro,” he says.

The US has its own debt problems, he concedes. “But the US has the means, the size of [its] economy and the ability to generate wealth,” Boyd says. In contrast, the impact on the dollar was muted when Standard & Poor’s decided to strip the US of its triple-A credit rating, he notes.

Meanwhile, the unprecedented move by the Federal Reserve in pre-announcing that interest rates will remain low for the next two years will help keep the dollar devalued and make it easier for the US to repay its debt, Boyd says.

No Plan for Growth

Merkel and Nicolas Sarkozy, president of France, went for the Hail Mary pass at a crisis meeting in August, with a bold call for an economic government of the eurozone, says David Gilmore, partner and economist at Foreign Exchange Analytics in Essex, Connecticut. A Hail Mary pass in American football refers to a very long forward pass made in desperation with only a small chance of success.

“My problem with the proposal is not with the concept of political unification, even if at first mainly fiscal, but just the lack of a road map for achieving it,” Gilmore says. “Moreover, there is no plan for growth in light of the weak second-quarter GDP [0.2% in the euro area and 0.1% in Germany] and signs that second-half 2011 growth is slowing globally.”

Trying to achieve fiscal consolidation and federalism without a strategy for restoring growth is putting the cart before the horse and will only worsen the prospects for growth and widen deficits, according to Gilmore. “When stacking up the US macroeconomic narrative against the European narrative, I am struck by how much more fundamentally negative the story is in Europe,” he says. “One-size-fits-all monetary policy and no matching sizes in fiscal policy have caught up with this grand experiment, short of massive subsidies from strong countries (Germany mainly) for weak ones.”

Germany does not want to be the rescuer of last resort, much less first resort, Gil-more says: “Fiscal adjustment in many of the debt-laden eurozone economies assures the need for bailouts and kills growth before it has a chance to gain a foothold.”

Plus, the politics that stand in the way of the adoption of a federated Europe are huge. “I think this is not the confidence-restoring set of policies the markets hoped for, and the euro should pay a price ultimately, as bouts of attacks on banks and sovereign credits continue,” Gilmore notes.

Recovery in major developed economies has fizzled out as the policy stimulus has faded and underlying structural fundamentals have come to the fore, says Lena Komileva, global head of G10 strategy at Brown Brothers Harriman in London.

“With the effectiveness of monetary easing in question and public debt set to tax future growth, ‘stall speed’ growth for the core [developed economies] is the best that can be expected, short of another global leverage boom,” Komileva says. “This means that concerns about a double-dip scenario are unlikely to disappear and the market sensitivity to negative surprises in the [economic] data will remain.”

The European situation is more likely to be resolved through stronger fiscal and economic integration, says Paul Robinson, head of European FX strategy at Barclays Capital. “However, we expect this to be achieved incrementally and, unfortunately, to be driven by market stress, forcing occasional shifts toward greater integration,” he says. Along the way, there is likely to be a much greater write-down of Greek debt, Robinson says. And at some stage, euro bonds will need to be introduced or the stabilization facility expanded to pacify markets, he adds.

Further credit defaults in smaller eurozone economies are unlikely, Robinson says. “However, there is no clear road map to integration,” he adds.

“Consequently, we expect the euro to regain trade and gain strength only when these uncertainties are addressed.” Concerns over the US and Europe will keep risk aversion elevated, he says. 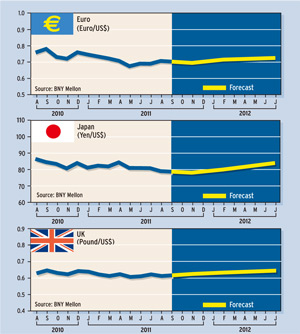 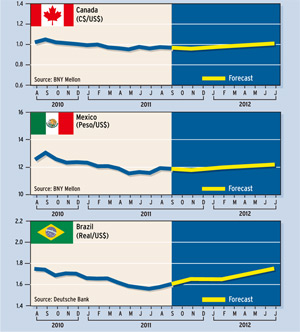 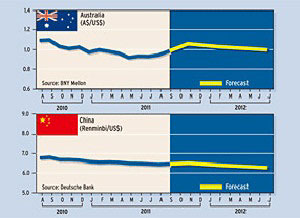 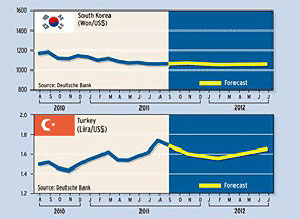