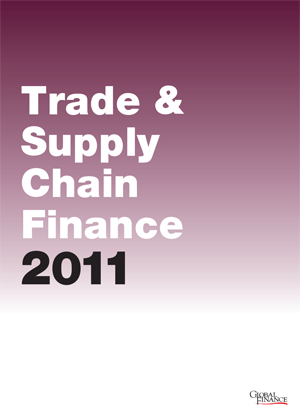 Following the 2008 financial crisis, trade finance was a term often uttered in the upper echelons of global political circles. Treasury secretaries bandied the term around at G20 meetings, stressing the importance of keeping the wheels of world trade well oiled and lubricated. The IFC established its Global Trade Liquidity Program, a joint private and public sector initiative designed to ensure banks in emerging markets had access to liquidity to help finance trade in their countries.

In 2010 there was a global recovery in trade, with volumes reaching record levels. But then 2011 began with global disasters and political upheaval. The Japanese earthquake and tsunami caused major disruptions in global supply chains, and trade to North Africa and the Middle East continues to be affected by the aftershocks of spring uprisings in the region.

Despite various bailouts, the sovereign debt crisis continues to hold sway across Europe, and banks are worried about the implications regulatory capital requirements under Basel III could have on traditional forms of trade finance—such as letters of credit and trade guarantees. Under the new rules, these instruments could attract a high leverage ratio similar other off balance sheet items. It is not just banks that are concerned about Basel III. Export Credit Agencies are also likely to be affected by the proposals, which could see loans they back no longer zero risk weighted. In this special report we explore the impact these global market events will have on trade.

We also look at how all of this is affecting global trade for corporates—buyers and suppliers that have historically relied on bank credit to finance trade. Few markets are now expecting an export-led economic recovery. Between this, tighter credit conditions and the reduction in global trade finance capacity from banks, companies are turning to alternative sources of liquidity. Trade securitization is regaining its lustre as a cheaper form of liquidity. And centuries-old trade finance tools, such as forfaiting, are getting a facelift as part of larger supply chain finance programs.

Companies are also getting smarter about how they source goods. By ensuring strategic suppliers in their supply chain are economically sound, efficient, and use green sourcing, companies are hoping to build more sustainable supply chains that can weather any economic storm—and build their brand reputaion at the same time.