Presenting the Winners’ Circle: A ranking of all the central bank governors who have received “A” grades over the history of Global Finance ’s Central Banker Report Cards—released as part of our 25 th anniversary celebration this year.

Every year since 1994, Global Finance has graded central bank governors in areas such as inflation control, economic growth, currency stability, interest rate management and their ability to stand up to political interference and maintain their independence. To determine the Winners’ Circle, the magazine incorporated all those governors who had received A grades over the past 18 years.

Our star performers hail from Asia-Pacific. Most of the A ratings awarded to Asian central bank governors have been given to just three individuals, two of whom are still in office. Malaysia’s current central bank governor, Zeti Akhtar Aziz, has received an impressive nine A grades since taking office in 2000. Fai-Nan Perng, who is still head of Taiwan’s central bank after 14 years, has received eight A grades, and Ian MacFarlane, governor of the Reserve Bank of Australia from 1996 to 2006, has received that distinction seven times.

In the Americas, Alan Greenspan received an A grade five times during his tenure at the US Federal Reserve, while Gordon Thiessen, his counterpart at the Bank of Canada between 1994 and 2001, who received three A grades, came in second.

In Europe, Luis ángel Rojo, the former governor of the Bank of Spain, tops the ranking, with five A grades. Hanna Gronkiewicz-Waltz, chairman of the National Bank of Poland between 1992 and 2000, Svein Gjedrem, Norway’s central bank governor for two terms between 1999 and 2010 and György Surányi, president of the Hungarian National Bank twice between 1991 and 2001, all vie for second place with four A grades each.

In Europe, seven central bank governors have received top grades more than three times. In the Middle East, South Africa’s Tito Mboweni, who headed the South African Reserve Bank until 2009, has been assigned an A grade five times, while Israel’s current central banking head, Stanley Fischer, who has been in office since 2005, has received the top grade four times.

Accomplished central bank governors who have enjoyed a long tenure in office clearly have more chances to collect A ratings, but holding the job for a long time, as Mervyn King has done at the Bank of England, does not guarantee success. In fact, none of the six governors who were awarded A grades in 2011 were from European countries; the majority were from Asia. That said, stewarding growing economies is certainly easier than trying to bring financial stability to countries grappling with large deficits and sovereign debt crises. 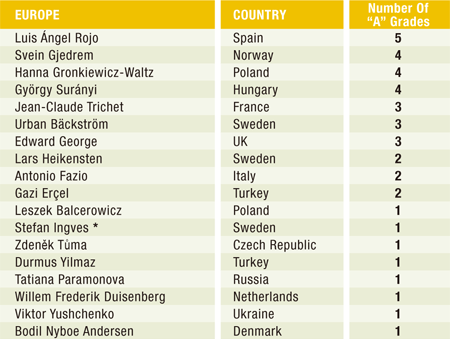 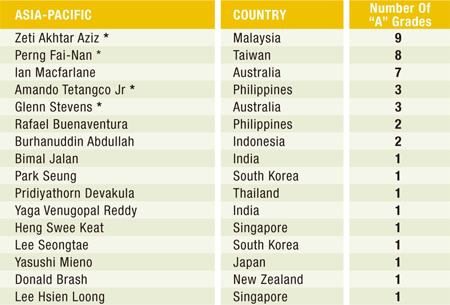