DIAMONDS IN THE ROUGH

The World’s Best Banks undoubtedly have flaws, but their fundamentals are improving. Global Finance unveils its annual list of the best banks globally, regionally and by country. 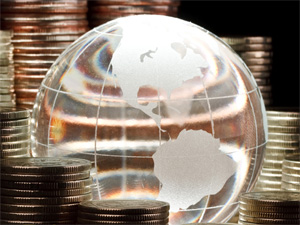 These are not the best times to be a banker. Litigation expenses are rising, and regulators are rolling out a raft of costly new rules and restrictions in the wake of the global financial crisis and the ongoing turbulence of the sovereign debt crises in Europe. Low interest rates in many countries as a result of central bank easing are making lending less profitable. Amid the gloom, however, there are signs that the banking industry is less risky and in a better position to handle future shocks than it was in 2008.

Reported capital ratios at European banks are at all-time highs, and deleveraging plans have progressed, according to analysts at Barclays Bank in London. Nonetheless, there is no change in the analysts’ underweight sector recommendation on European banks. Loan quality continues to deteriorate, and return on equity is well below long-term targets.

For the past three years through June 30, US bank earnings have risen smartly for 12 consecutive quarters on a year-over-year basis. The $34.5 billion total for the second quarter was up 21% from the second quarter of last year. The number of banks on the FDIC’s “problem list” fell to 732 from 772 in the previous quarter.

Some of the most successful global banks have cut back in Europe to focus on faster-growing emerging markets. Global Finance has identified the best banks in 136 countries and eight regions, as well as the best banks globally in 12 key banking categories. In selecting this year’s winners, Global Finance’s editorial team considered factors that range from the objective to the informed subjective. The objective criteria included growth in assets, profitability, geographic reach, strategic relationships, new business development and product innovation. Subjective criteria included the opinions of equity and credit-rating analysts, banking consultants and others in the industry, as well as corporate and financial executives.

The winners are not always the biggest banks, but rather the best banks—those with qualities that corporations should look for when choosing a bank. These are banks with the most-effective risk-management systems and excellent service.

It was a tough decision, choosing this year’s winners. There are a limited number of banks with worldwide operations from which to select the global winners. Many of these banks have failed to live up to their own high standards of conduct. More than a dozen major banks have been accused of manipulating the London interbank offering rate. Others have paid big fines for accusations of money laundering, tax evasion and misleading investors. Nevertheless, Global Finance identified those banks that made significant contributions through their dedication to meeting customers’ needs.

Within this listing of the Best Banks we have included our May 2012 list of the Best Developed Markets Banks and Best Emerging Markets Banks. We are also announcing for the first time the global winners in several categories. 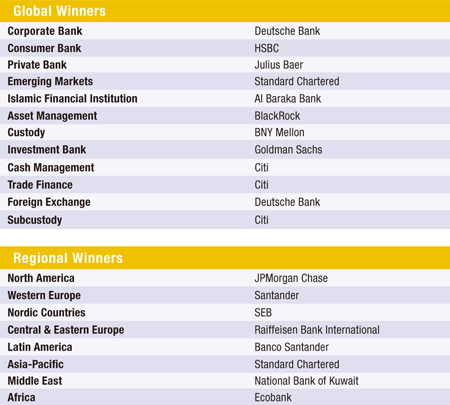