Santander, the eurozone’s biggest bank by market value, said it would issue up to $4.3 billion of shares in an initial public offering of up to 24.9% of its Mexican unit, Grupo Financiero Santander Mexico.The two-part sale was expected to be the largest public offering thus far by a Mexican company.

Some 20% of the shares were to be sold in Mexico, and the remainder globally, including the US. American depositary shares, each equivalent to five shares of Series B common stock, were expected to begin trading on the New York Stock Exchange around September 26. The common shares will be traded on the Bolsa Mexicana de Valores.

Santander, whose Brazilian and Chilean subsidiaries are already listed, will use the proceeds of its Mexican listing to increase capital. Telmex’s $2.2 billion listing in 1991 previously held the record in Mexico for IPO size.

Santander’s chairman, Emilio Botín, said he wants to list all of the bank’s most important subsidiaries in the next five years. The bank’s core Tier 1 capital ratio was 10.1% in June, above the 9% minimum required for European banks. The Santander Mexico IPO will increase the ratio by about one half of a percentage point.

“This transaction is another step in our strategy of having quoted subsidiaries,” Botín said in a statement. “Our three largest subsidiaries in Latin America will be among the top 100 banks in the world by stock-market value.” The IPO values the Mexican unit at up to $17.2 billion. Santander’s Mexican subsidiary is that country’s fourth-largest bank by deposits. The unit’s earnings rose by 14% in the first half of 2012.

If successful, the Santander Mexico listing would be the third-largest globally so far this year, following Facebook’s $16.1 billion IPO in May and Japan Airlines’ relisting on the Tokyo Stock Exchange in an $8.5 billion IPO in September. All of these issues would be smaller than the $18 billion “re-IPO” of AIG stock recently announced by the US government, which bailed the company out four years ago.

Mexico’s GDP is expected to grow about 4% this year. The country has a growing middle class, with credit growth of around 15% annually. Mexico is underbanked, compared with more mature markets and those in other Latin American countries. Bank loans in Mexico are equal to about 20% of GDP, versus an estimated 49% in Brazil and 80% in Chile.

As of the end of last year, the four largest banks in Mexico were BBVA Bancomer, Banamex (owned by Citi), Banorte and Banco Santander Mexico, which together held 68.4% of deposits.

Like other Spanish banks, Santander has been writing down real-estate loans in its home market. “Everyone knows the situation in Spain is not like that in Mexico,” Botín said. “Mexico is magnificent, and Spain is not at its best at the moment.” Madrid’s Santander’s earnings fell 93% to $122 million in the second quarter, missing analysts’ estimates.

Santander had planned to list its British subsidiary, Santander UK, but those plans were put on hold earlier this year, owing to the weak economies in Europe and lack of investor demand. Santander also needs to settle details of its acquisition of 318 branches of Royal Bank of Scotland before the listing of its UK subsidiary can proceed, likely next year.

The Spanish government has asked for $125 billion in aid to restore the health of its banking system, but Santander won’t need to tap EU bailout funds. 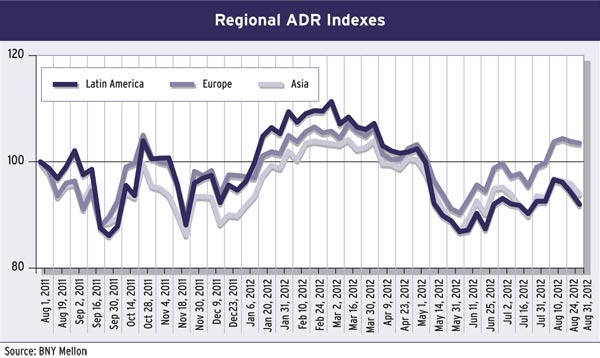