The euro rebounded to a two-month high in early September, as European policymakers approved a plan to lower borrowing costs for debt-laden members of the euro area through open-ended purchases of bonds of up to three years in maturity.

With the Bundesbank resisting his plans to buy more sovereign bonds of “peripheral countries,” European Central Bank president Mario Draghi took his case directly to the German people with a letter published in Die Zeit , a national weekly newspaper. He stressed that Germany is the anchor of the eurozone and that further integration of Europe would come through “true oversight of national budgets.”

In announcing an unlimited bond-purchase program in September, Draghi said: “We will have a fully effective backstop to avoid destructive scenarios with potentially severe challenges for price stability.”

Bond purchases by the ECB will be fully sterilized (offset by equivalent sales of other assets) so as not to increase the money supply and feed inflation, he said. He said that the euro was irreversible.

Governments need to activate the buying of their bonds by requesting aid from Europe’s rescue fund. Such aid will only be granted “with strict and effective conditionality,” Draghi said.

PLAN IS FLESHED OUT

“For Europe, the pieces are beginning to fall into place for more ECB bond buying,” says Alistair Cotton, senior analyst at Currencies Direct, a global provider of foreign exchange and international payments services. “But the markets are likely to be disappointed, because it will take some time for Draghi to get everything ready,” Cotton says.

Spain is waiting to see what the conditions will be, while Draghi is seeking a way to make the program palatable to Germany, according to Cotton.

“Greece is buying time,” Cotton says. “The country needs to be cut free from the euro, but the EU politicians will keep it in the monetary union until they feel it is the best time to let it go.”

The key obstacle to implementation of the ECB’s plan for bond purchases, which it termed “outright monetary transactions,” is that neither Spain nor Italy appears prepared to request the aid, says Marc Chandler, global head of currency strategy at Brown Brothers Harriman in New York.

“That precondition was reiterated by Draghi, who also indicated that bond purchases could stop if a country falls out of compliance with the memorandum of understanding that is required,” Chandler says.

NO CAP ON YIELDS

It remains to be seen how aggressive the ECB will be in buying bonds in sufficient amounts to bring yields down to what it considers to be more reasonable levels. The ECB did not specify explicit caps for peripheral yields.

“Confirmation of its [the ECB’s] intention to start such purchases should lead to a flatter front-end yield curve in Spain and a stronger euro via a lower risk premium,” according to analysts at Barclays Capital. “We expect the medium-term downtrend in the euro versus the dollar to resume, given our view that the ECB has more scope for further easing than the Federal Reserve, and lingering fiscal solvency issues in the periphery,” they said.

The ECB’s buying of periphery sovereigns, potentially in very large amounts, should keep pressure on the sovereigns to continue their fiscal adjustments and structural reforms, according to Barclays. The ECB’s announcement that purchases would be sterilized should help address the Bundesbank’s concerns about debt monetization, the UK bank says.

To be eligible for the new program, governments will first have to request European Financial Stability Fund (EFSF) support. David Starkey, senior foreign exchange trader at Western Union Business Solutions, Victoria, British Columbia, notes: “This could prove to be a tough pill to swallow for sovereign governments in need of support,” he says.

Draghi said the involvement of the International Monetary Fund would be sought to design country-specific conditionality and to monitor compliance with such programs. He said that purchasing debt of three years or less was within the ECB’s mandate. The bond purchases will enable the central bank “to address severe distortions in government bond markets which originate from, in particular, unfounded fears on the part of investors of the reversibility of the euro,” Draghi said.

Bundesbank president Jens Weidmann dissented from the ECB’s bond-buying decision, which he described as “tantamount to financing governments by printing bank notes.”

Ultimately, Weidmann is right, says Chandler of Brown Brothers Harriman. Spain and Italy have increasingly relied on financing deficits and debt with shorter-term instruments, Chandler says. “Weidmann intimates that this subjugates monetary policy to fiscal policy and puts at risk the independence of the central bank,” he adds.

The bond buying forces other countries, not just Germany, to share in the new risks to the European Central Bank’s balance sheet, Chandler says. “It also forces taxpayers (through the central bank) to take the same haircut as an investor who chose to buy a peripheral debt instrument,” he says.

In the US after the Great Depression, the national government’s balance sheet and deficit spending became a conventional tool to underwrite aggregate demand, Chandler says. “So too out of this crisis, it appears central bank balance sheets will be a permanent or quasi-permanent feature for years to come,” he says.

Robert Lynch, strategist at HSBC Securities (USA), said in a report that the steps announced by Draghi would be positive for the euro. “First, they look to have the potential to be effective in lowering yields in stressed, peripheral bond markets,” Lynch said. “Those stresses have been a primary factor weighing on the euro for much of the past year, so to the extent those stresses can be eased, the euro should be able to recover some of those losses.”

What’s more, the ECB measures represent another major step toward burden sharing and integration in the euro area, Lynch said. 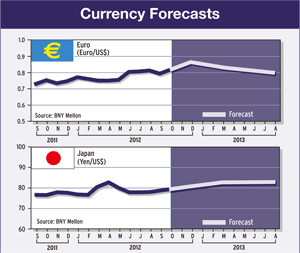 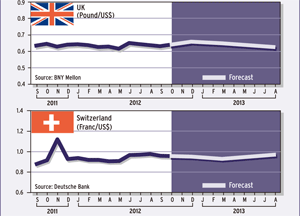 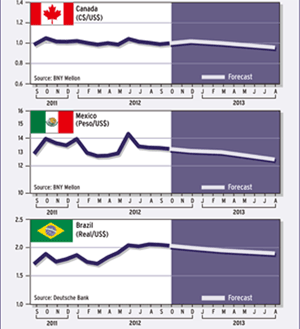 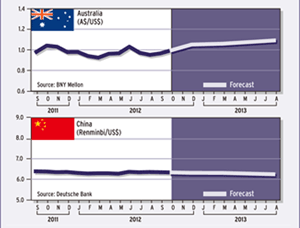 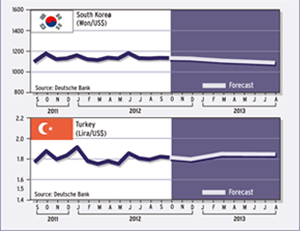