The Struggle For Energy & Power In Asia

I ndia relies on Indonesian coal to power its utilities, and both nations face huge increases in coal-fired power demand. But bureaucratic red tape makes it difficult for either nation to increase production. 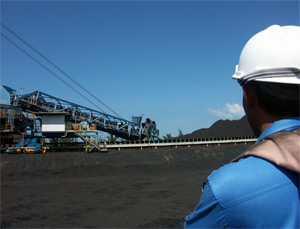 The astounding numbers involved in India's July blackout highlight the sheer human impact of gaps in power demand and supply. Some 600 million Indians were touched by that outage. That's almost double the population of the US. To put it differently, if the whole of Canada, the US, Mexico, Guatemala, Honduras, Nicaragua, Panama, Belize, Costa Rica, Venezuela, Colombia, Ecuador and Bolivia lost power at once, the number of people involved would still not quite equal the number of Indians affected.

The Indian power outages were pegged to various causes, such as failure of antiquated equipment and problems with national distribution. Ultimately, however, India cannot get enough thermal coal because of bureaucratic blocks to developing its known domestic reserves. About 15% of India's total installed coal-fired power capacity remains idle because of delays to approvals. Some of the delays are owing to environmental concerns; some are simply because of the labyrinth of bureaucracy that private- and public-sector developers must negotiate.

To feed the gap between rising demand and thin supply, India turns to more expensive imported coal, much of it from Indonesia. But that nation has power needs of its own and has recently announced additional controls on coal exports in an effort to ensure support for its own power needs. The controls sound stringent—a stiff export tax and a ban on shipping commonly consumed low-grade coal out of the country—but agencies within the government have since backpedaled, confusing the situation for Indonesia's coal customers, not least India.

Underlying the power deficits both nations face is a penchant for heavy-handed and confused regulatory initiatives—a cautionary tale of afflictions that bedevil Asia's growth. India's story is a case of regulation vexing available solutions. India's massive blackout in July, generally thought to have been caused by a shortage of coal and by endemic problems in India's grid, underscored the significance of imported coal—primarily Indonesian coal—to the nation's economy.

The collapse began on July 30 when the northern grid, one of India's five regional power networks, shut down, affecting eight of India's 28 states. It happened again the following day, bringing down power in 18 states, including the nation's capital, Delhi.

Simply put, outages were caused by rising peak power demand and the inability of supply to meet that demand. Spikes in demand are not unusual, and experts believe that failure of old equipment may have been part of the problem. India's power distribution system is also overly complex, the legacy of a system in which each state developed its own power grids near sources of energy such as coal mines or hydropower.

There is really no such thing yet as a national power grid—heavy demand on power in one region can strain the capacity of others, creating a chain reaction of blackouts.

However, the situation is slowly improving. According to the Economist Intelligence Unit, India's interregional power-transfer capacity stood at 23.8 gigawatts (GW) in 2011, up from 11.5 GW in 2007. But the current level is only a fraction of the nation's total installed power capacity of 203 GW.

Meanwhile, India heavily subsidizes power tariffs, which have crippled the finances of state power distribution networks, adding to the potential for other systemwide breakdowns. But it is not politically feasible to raise the tariffs.

Add to this already-complex situation regulatory problems that limit domestic coal production. The Indian ministry for environment and forests denied permits to mine coal in several areas of known reserves for environmental reasons. It has restricted Coal India, the state-owned coal miner, from fully developing seven coalfields out of the 21 it owns.

The classic Indian story of enterprise drowning in red tape only begins with these restrictions. Private development of coal has been slowed by the difficulty in obtaining permits. Nonstate developers need separate permits to buy a coal block, begin mining and build a coal-fired power plant. Problems encountered in extracting coal locally have led to about 15% of India's total installed capacity for coal-fired power generation being idle at any one time.

So India has to turn to more expensive imported coal and will do so increasingly. According to Clarkson, a London ship broker and research house, steam coal imports into India have been booming in recent years, nearly doubling between 2009 and 2011, from 47.6 million tons to 93.5 million tons. Imports are expected to rise to 108.5 million tons in 2012.

In the wake of the blackout, Coal India has said it will need to raise its use of imported coal to 50% of its total coal usage. A Coal India official told newspapers that the company would have to import 20 million tons of coal this fiscal year, with power producers bearing the added cost. The official said that Coal India is already selling coal at a discount of 20% to 70% of the full imported price of about INR6,000 ($108) per ton.

Indonesia's efforts to control its coal exports are certain to make that nation's coal a lot more costly to India's strapped power producers. Indonesia's government has already imposed regulations aimed at gaining a higher share of state revenue from the mining industry, including cutting foreign ownership and placing a 20% tax on exports of unprocessed minerals.

In May, however, energy and minerals minister Jero Wacik said at a conference in Bali that Indonesia needed to reserve its own coal resources for domestic power generation. "Indonesia's need for coal will increase strongly, so exports will need to be controlled," Wacik said. However, he gave no details of the scope of such measures, or the amount of an export tax.

The news sent the share prices of Indonesia's two biggest coal producers—Bumi Resources and Adaro Energy—down about 13% in a day, and contributed to a decline of 4% in the Jakarta Stock Exchange index. The stocks have continued downward ever since.

"Really, in the end, the government's immediate concern is increasing the amount of money it can get from this sector," says Simon Wong, senior analyst in Singapore with Moody's Investor Service.

Estimates of the toll that a 20% tax would exact on Indonesia's coal trade may have contributed to Wacik's demurral. Wood Mackenzie analyst Rohan Kendall projects that a levy of that size would eventually affect 68 million tons of coal exports annually of Indonesia's current total of about 310 million. That amount would lead to an $11 billion reduction in revenue for Indonesian coal exporters each year.

Wacik's concerns about protecting domestic supply are real ones and will have to be addressed. Like India, Indonesia faces a growing power demand with a lagging supply. Indonesia's government is under extreme pressure to ensure what has come to be called 'energy security'. On August 14, the nation's state-owned electric utility, Perusahaan Listrik Negara, said it expects domestic coal consumption to double within seven years. It said it plans to invest up to $1 billion to buy stakes in local mining companies to safeguard access to supplies. One measure under consideration is a total ban on exports of low-grade coal, the variety used in most Indonesian power stations, by 2014.

The growth in coal consumption tracks Indonesia's remarkable recent economic buoyancy. Indonesia has continued growing as other nations in Asia have experienced slowdowns. For the second quarter of 2012, Indonesia's gross domestic product grew 6.4% year-on-year. "Both consumption and investment picked up," wrote Su Sian Lim, an analyst for HSBC Global Research, in a report. "Net exports subtracted significantly from overall growth, but even this owed to very strong import growth."

India's now-legendary July blackout can ultimately be attributed to a coal shortage. The blackout underscores Indonesian policymakers' anxiety about their nation's own energy gap. But additional protectionist measures won't benefit the nation's coal mining companies, and will cause India's beleaguered power producers yet another headache.

Japan faces an excruciating dilemma in its power needs. Public fears following the nuclear meltdown at Fukushima in the wake of the March 2011 earthquake and tsunami have led to the shutting of all but two of the nation's nuclear power plants.

The disaster prompted the government to alter its nuclear energy plan-to bring supply down from 50% to just 15%-plugging the gap with renewable energy, such as wind and geothermal. The revised energy plan was expected to be announced in September, as this issue went to press.

The power gap since the 2011 crisis has been plugged by higher imports of liquefied natural gas (LNG)—Japan was already the world's largest importer of LNG before the quake—and increased coal imports. But these bring higher costs. "Japan's electricity is not cheap by world standards," says Michael Newman, head of Japanese research for Macquarie in Tokyo. Higher energy prices come at a time when industrial capacity is growing, underscored by domestic production of higher-value goods. Meanwhile, offshoring is increasing as well, which higher electricity prices will accelerate, Newman predicts.

The government is also proposing to spin off power distribution from generation, promoting price competition in distribution and allowing room for new entrants into the regulated market. News of this plan emerged in mid-July. By mid-August, nine listed power utilities had lost almost $17 billion in market value.

But liberalization will not be enough to hold down prices. "As much as people might get upset, Japan has little in the way of choices. Several EPCOs [electric power companies] have already cut their dividends due to mounting losses," says Newman. If the nation wants to cut its dependence on expensive imported energy, it will have to let nuclear back in the door.