The recent sharp decline in emerging markets currencies to multiyear lows will make it more costly for corporations in these countries to repay their dollar-denominated debt. Analysts say this could lead to a further rise in the corporate default rate for emerging markets borrowers, which rose sharply in 2012.

Fitch Ratings in London says: “European investors are concerned about how the end of the Federal Reserve’s quantitative easing will affect liquidity for emerging markets. We believe these concerns are likely to be focused on the most vulnerable sovereign and corporate credits and that widespread credit distress in emerging markets is unlikely.”

In its latest quarterly investor survey, released in August, Fitch said two-thirds of fixed-income asset managers polled expect concerns over the timing of QE reduction to drive volatility in the amount of cash flowing into and out of emerging markets bond funds for the remainder of the year. More than two-thirds also said they expected fundamental credit conditions for emerging markets corporations to deteriorate. 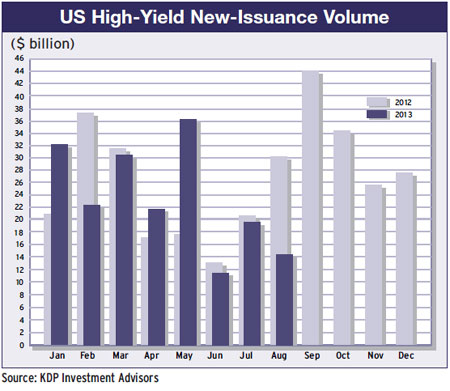 The ratings agency says emerging markets should be more resilient to a liquidity shock than in the past, but that some emerging markets are more vulnerable to volatile capital flows and higher interest rates, owing to their large current-account deficits and low foreign reserves, as well as high leverage.

Most emerging markets corporate issuers are well placed, as they have steadily improved their liquidity profiles and have not used cheap money for the kind of debt-fueled expansion that has caused problems in the past, according to Fitch. “If liquidity were to deteriorate, we could see a widening performance gap between companies that have already tapped cheap funding and those that still need to, or which might have to scrap investment plans,” it says.

IMPACT ON US MARKET

Defaults by corporations in emerging markets surged to $22 billion in 2012 from only $182 million a year earlier, according to Standard & Poor’s. Emerging markets issuer defaults could affect US high-yield default trends if economic growth in these countries slows as a result of the Fed’s plan to scale back stimulus, Fitch says.

July defaults included dollar-denominated high-yield bonds from two Mexican companies: homebuilder Desarrolladora Homex and Maxcom Telecomunicaciones. Emerging markets dollar-denominated issues account for about 10% of the US high-yield market. The largest country concentration is in issuers from Brazil ($30 billion), Mexico ($16.3 billion) and China ($14.4 billion), according to Fitch. The vast majority of EM corporate bonds are unsecured.

Some 70% of the $1.1 trillion emerging markets corporate debt asset class consists of investment-grade bonds, according to BNP Paribas. Companies from Asia have been the largest issuers in recent years, rivaled only by those from Latin America, the bank says. A primary advantage across emerging markets companies is their low level of leverage, BNP Paribas says. Many companies have issued debt in local currency. 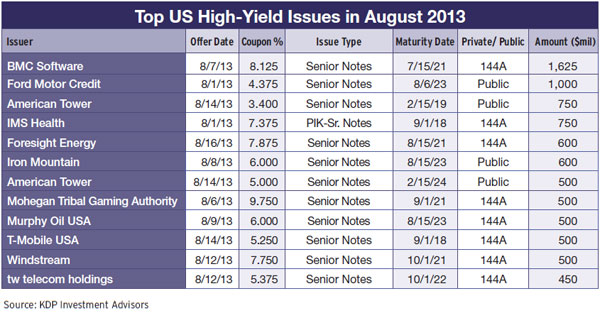