A new US law that makes it easier for smaller companies to raise equity capital is boosting initial public offerings, analysts say. The Jumpstart Our Business Startups, or JOBS Act, was largely responsible for a surge in IPOs in the US markets in the second quarter of 2013.

IPOs by emerging growth companies with annual revenues under $1 billion, which are eligible to benefit from the JOBS Act, accounted for 77%, or 48 out of the total 62 IPOs in the US in the second quarter, according to PwC. A majority of these companies took advantage of the confidential filing provision of the JOBS Act, enacted in April 2012. The act allows companies that qualify to submit stock-registration statements confidentially and requires limited data on executive compensation.

Many of the rules needed to implement the crowdfunding and other provisions of the JOBS Act are yet to be completed, so its full impact won’t be known for some time. Already, however, the act has stimulated new listings by biotechnology companies and other growth companies seeking to take advantage of the relaxed financial reporting and accounting standards.

Henri Leveque, leader of PwC’s US capital markets and accounting advisory services, says: “We are beginning to see a broadening of sectors represented in the IPO market, especially growth-related offerings in sectors that are well positioned to capitalize on a recovering economy. We are seeing an increase in IPO-readiness activity, which leads us to remain optimistic about the health of the US IPO market for the remainder of 2013.”

For the year-to-date through mid-August, companies have raised $33 billion through public offerings on the New York Stock Exchange alone—more than was raised by the Tokyo, London, Chinese and Brazilian exchanges combined. “The JOBS Act is a welcome signal that Washington understands the need to boost the ability of small businesses to raise capital—and it is already having some impact,” says Duncan Niederauer, CEO at NYSE Euronext.

Meanwhile, the London Stock Exchange introduced a high-growth segment to its main market in March. The new segment is aimed primarily at fast-growing technology companies. Similar to Nasdaq, the HGS allows companies to list just 10% of their shares.

It will offer a transitional route to the Daily Official List of the exchange and is an EU-regulated market. Issuers need to “clearly set out their intention” to eventually join the main market. The companies also must have a compound annual growth rate for revenue of 20% or more over a three-year period. The new market is open to firms in the European Economic Area only.

In the first half of 2013, the NYSE and Nasdaq raised $20.9 billion from new listings, followed by the exchanges of Brazil with $6.5 billion, and Hong Kong with $5.1 billion, according to PwC. The London Stock Exchange was fourth, with slightly less than $5.1 billion. 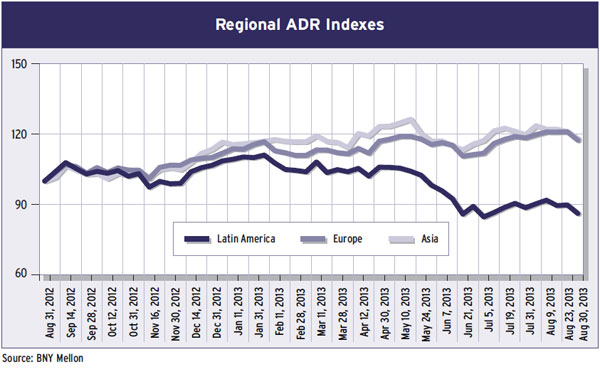