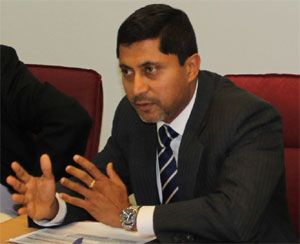 Global Finance: Emerging markets have underperformed developed this year. What accounts for the divergence?

Conrad Saldanha: Several factors are responsible. The decline has been primarily driven by currency weakness, as US interest rates have backed up and the dollar has strengthened in anticipation of monetary tightening. The rupee, rupiah and rand have suffered losses, in economies that already have current-account deficits. In markets where foreigners own a significant share, investors have proved fickle, reversing fixed-income and equity flows. In addition, emerging markets earnings have disappointed those who expected low-double-digit growth, with commodity sectors seeing the brunt of downgrades. Moreover, self-inflicted policy mishaps and sluggish reform have dogged Brazil and India, while China is enmeshed in a leadership transition.

GF: Emerging markets took a drubbing in the late 1990s, during the various EM crises. Is it different this time?

Saldanha: Yes, it is slightly different. In this cycle, emerging markets have not built up such massive foreign currency debts, so leverage is more manageable. The market is already devaluing their currencies for them, so the key will be reforms involving fiscal discipline and macroprudential measures.

GF: Do you foresee stability down the road?

Saldanha: We do. The near term is complicated in some countries, but ultimately we see relatively strong government balance sheets, with growth deriving from the supply side and consumption. We still need to price in a higher level of interest rates on a global basis, but once the market resets, emerging economies will be poised to outperform. After years of rapid growth, however, growth rates must moderate, as scale becomes an issue.

GF: How will that pace compare to developed markets’?

Saldanha: The starting points are different, for one thing. In developed markets, recovery is now taking place, but off a very low base. Emerging countries are still growing faster.

GF: Which countries do you expect to deliver the best growth?

Saldanha: We are focusing on those places with supply side features, like population growth, productivity and spending power, such as India, Indonesia, the Philippines, Turkey and, longer term, Brazil. Mexico should benefit from domestic consumption plus proximity to a resurgent US. Shale gas opportunities also weigh in its favor. In China local infrastructure is a major element [of its economy]. It is in the middle in terms of being an export- versus consumption-driven market. Russia remains an exporter, with 30% of its economy dependent on gas and oil, while countries like Peru and Chile—also exporters—rely on commodities such as copper. Taiwan and Korea—global IT and auto exporters—have been impacted by lower imports from the West but should do better as the world recovers.

GF: Which sectors are likely to outperform?

Saldanha: We find opportunities in domestic sectors with good returns and predictable growth, such as consumer products, healthcare and pharmaceuticals, as well as distribution companies geared to consumption. Industrials and machinery are important. Financials pose some concern, as they constitute about 30% of the benchmarks and the better quality names still trade at expensive multiples. [With emerging markets financials], their books may not yet be seasoned. Altogether, we can identify many good, entrepreneurial firms in India, Thailand, the Philippines and Indonesia. Even small caps should outperform, since so much money has missed them by flowing through the ETFs (exchange-traded funds).