Features : Mergers And Acquisitions: Betting On A Revival

September 01, 2003
Author: Dan Keeler
Analysts are hoping that the long-awaited revival in the mergers and acquisitions market has finally begun. They might yet be disappointed.
• By Dan Keeler


The recent apparent rise in activity in the global mergers and acquisitions market has set off a wave of speculation that the market may be on the verge of a turnaround. In both the United States and Europe, high-profile announcements have sent shivers of excitement through banking and corporate worlds alike. Deals that have set tongues wagging include Olivetti’s proposed $44 billion takeover of Telecom Italia, Proctor & Gamble’s plan to buy Germany’s Wella for $7 billion, News Corp’s $7 billion acquisition of Hughes Electronics, and Oracle’s hotly contested $6 billion bid to buy PeopleSoft.

Not all the discussion has been fo-cused on the possible revival of the M&A; market, though. Plenty of ob-servers dolefully point out that the mar-ket has a long way to go before it match-es—or even comes close to replicating—the frenzied activity of 1999 and 2000.

Regardless of whether the optimists or the pessimists are right, one thing is certain: Conditions are near perfect for a global surge in M&A; activity. Edward Hemmelgarn, chief investment officer of Cleveland, Ohio-based Shaker Invest-ments, believes all the factors are in place to trigger strong growth. “On a worldwide basis there is a lot of available capital out there. There have been dramatic falls in key short-term rates around the world over the past year.And money supply is rising,so there is plenty of liquidity,” he says.

Stability is The Key

Hemmelgarn also points out that the worldwide econ-omy is more stable than it has been for several years. “The stability is important because it gives businesses the confidence that what they see happening is repeat-able,” he explains.

Paul Gibbs, a managing director at JPMorgan in London, believes there is both an appetite and a need for a surge in activity.“We think that companies should be do-ing more M&A; deals than they are currently,” he says. “There is a lot more consolidation to come.”

But while many market watchers are confident M&A; activity is on an upward trend, the figures so far this year provide scant evidence that any real growth is occur-ring. Even as analysts were celebrating the early July flood of M&A; announcements, the research firm Dealogic was releasing figures that showed global activity actually fell in the first half of this year compared with the same period in 2002. According to Dealogic’s half-yearly review, global an-nounced-deal value fell 8%, while the total deal count fell by almost a quarter in the first half of the year. Quarter-on-quarter deal value did rise slightly, with $311.2 billion in the second quarter compared with $307.6 billion in the first quarter.

M&A; activity in the United States showed a similar trend, although the announced-deal value in the first half of 2003 was sharply lower—more than 16% down—compared with the same period in 2002, while the number of deals rose from 3,478 to 3,516, according to figures from research firm Thomson Financial.

The Asia-Pacific region showed more positive signs of improvement. According to Dealogic, first-half targeted-deal value rose 7%, to $112.0 billion from 1,743 deals. The first half of 2002 saw 2,576 deals announced, with a total value of $104.2 billion.And while both the total val-ue and number of deals announced in Europe fell in the first half, European companies were the targets for al-most half of the worldwide M&A; activity.

The figures may be patchy, but observers point to en-couraging signs within the numbers.Tom Burnett, president of Merger Insight, a New York City-based merger re-search organization, believes the spread of activity im-plies that broad-based recovery may be beginning.“The most remarkable thing about the activity that we have seen in the past few weeks is that it is not any one sin-gle industry,” he says. “That points to a feeling that the economy is going to do better across the board.”

Another economy-watcher, US Federal Reserve chair-man Alan Greenspan, is also looking to the M&A; market for signs that the economy is rebounding. In response to a recent question from a US senator who had tired of waiting for the long-heralded economic upturn, Greenspan suggested a pickup in M&A; activity would be a key indicator. Lest any listeners, heartened by recent deal announcements, be tempted to become irrationally exuberant, though, the habitually downbeat Fed chair-man pointed out that any signs of a recovery in M&A; ac-tivity were “quite preliminary.”

According to Greenspan, corporations’ reluctance to consider mergers or takeovers was just another symptom of the hangover from which business is still suffering.“It’s going to take a while for that to wear off,” he said.

Greenspan is not alone in his belief that M&A; activity acts as a litmus test for the economy as a whole. Burnett says that many companies are waiting until they see gen-eral economic improvement before they take the plunge.“We just don’t know how strong the economy is going to be,” he says.“If we see strong growth, prospects will brighten and things will start to look up.We’re hope-ful that we’ll get some improvement, but if the employ-ment growth does not pick up, then we’re going to get disappointed again.”

After enduring such a rocky period, companies are likely to be especially cautious about making bold moves.JPMorgan’s Gibbs believes the trigger that will set off a new wave of acquisitions will be a combination of confidence driven by stronger earnings and a sustained rise in the stock market.“The near future will depend on how the second quarter earnings look. If the results are good, M&A; will pick up,” he explains.“It should pick up. We know companies everywhere have been focusing on cutting costs, and that has to lead through into higher earnings.” 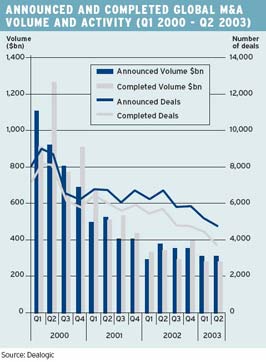 Shareholders’ relentless demand for growth is also like-ly to drive more companies to merge.“Because there isn’t strong [organic] growth, companies are trying to find other ways to grow,” says Hemmelgarn.“One of the ways they are looking to do that is through acquisition.”

With interest rates at such low levels and with many companies sitting on piles of cash, the argument in fa-vor of growth-by-acquisition will be hard to counter for many organizations. Companies looking at buying oth-er businesses in their own industry should be able to persuade investors that the deal will involve relatively low risk and provide a high return on investment.“You don’t have to have a very high threshold to get over to show it will be an accretive acquisition,” comments Hemmelgarn.

As a result, observers are expecting to see more cash deals over the next few months, as well as considerably more consolidation in a post-recession shakeout. It is be-coming increasingly clear which players are winners and losers in the major business sectors, making it harder for potential bid targets to defend themselves—and easier for acquirers to justify their intentions.

Yet with all the stars aligned so favorably, there is still no certainty that the M&A; market is entering a period of sustained revival.“We think it will go up, but the an-nounced deals do not yet add up to higher volume,”says Gibbs at JPMorgan. For now, even among the optimists, the conventional wisdom appears to be “Don’t hold your breath.”