THE AMERICAS Trading Volume Holds Up Through Issuance Slump

The volume of depositary receipt trading on US mar-kets in the first half of 2003 edged above that in the same period of last year, even as the number of new programs and the value of capital raised through such programs fell sharply.

Only 35 new public and private DR programs were established in the first six months of 2003, half the number of programs that became effective in the same period a year earlier, according to Bank of New York.

The volume of trading held up well in this year’s first half, considering the geopolitical climate and the war in Iraq, says Timo-thy F. Keaney, managing director in charge of BNY’s American deposi-tary receipts division.

Trading of depositary receipts on the New York and American Stock Ex-changes and Nasdaq rose slightly to 14.8 billion shares in first six months of 2003 from 14.7 billion shares in the first half of last year.

Meanwhile, non-US companies continued to make use of DRs as a vehi-cle for acquiring US com-panies.The most notable example of this in the first half was British banking group HSBC’s acquisition of US consumer finance company Household International, which was valued at $13 billion.

“We are anticipating a pickup in M&A; activity over the next 12 months, as companies flush with capital feel confident about moving forward with acquisitions,” Keaney says.

While capital raised in the form of American depo-sitary receipts was down sharply from the same period in 2002, positive signs are emerging, suggest-ing a recovery, according to an analysis of first-half activ-ity by Citigroup.

The bank notes that 78% of the capital raised in ADR form by non-US companies through June 13 of this year occurred in the first six trading days of June.

“Overall, the ADR market has been negatively im-pacted during this period of market uncertainty in the first half of 2003, but much less so than the US market when comparing trading value,” says Sanjeev Nanavati, managing direc-tor of Citibank Depositary Receipt Services.

“Momentum for ADRs has shown signs of improvement in recent weeks, and it looks like a trend that’s going to last,” Nanavati says.

London-based Eidos, a developer and publisher of entertainment software, selected Bank of New York as successor depositary for its ADR program.

Its Tomb Raider title is one of the most success-ful video-game franchises owned by an independent publisher, with sales of 28 million units.

Zakhidenergo, one of Ukraine’s largest energy companies, initiated a Regulation S American depositary receipt pro-gram, with Bank of New York as the depositary.

One ADR is equivalent to three of the company’s ordinary shares.

Under Regulation S, a company issues securities without registering with the US Securities and Ex-change Commission. Per-sons outside the US can immediately trade in these restricted securities, but not with US citizens.The securities are eligible to trade on US markets following a one-year wait-ing period.

South Korea raised $241 million on June 9 through the sale of a 15% stake in Daewoo Shipbuilding and Marine Engineering via the company’s Regulation 144A American depositary receipt program. Such programs are designed for securities not registered with the US Securi-ties and Ex-change Com-mission.

The issue was the larg-est capital-raising using ADRs in the first six months of 2003.

Daewoo Shipbuilding is the world’s second-largest shipbuilder after Hyundai Heavy Industries, also based in South Korea.

The government di-vested a 10% share of Daewoo Shipbuilding held by state-run Korea Development Bank and a 5% stake held by Korea Asset Management.

The state-run institu-tions became major shareholders in Daewoo Shipbuilding in December 2000, when the com-pany’s creditors swapped debt for equity.

Johannesburg-based Metorex, a diversified mining company, launched a Level I ADR program in the US over-the-counter market, Bank of New York announced as depositary.

Each ADR is equivalent to one common share. Metorex is listed on the JSE Securities Exchange in South Africa and on the London Stock Exchange. 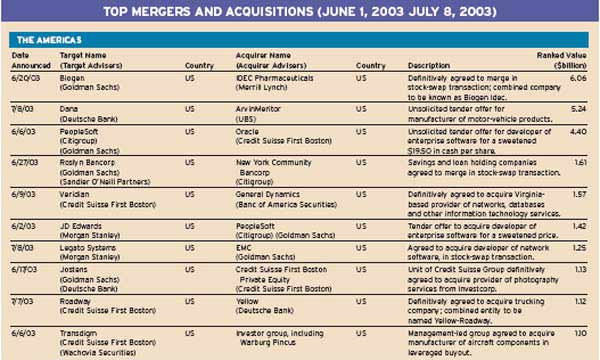