IDEC Pharmaceuticals and Biogen agreed to merge in a $6 billion deal that will create the third-largest biotech company in the world.

Biogen’s main drug is Avonex, which is used to treat relapsing forms of multiple sclerosis. San Diego-based IDEC makes the non-Hodgkin’s lym-phoma drug Rituxan. Both drugs have annual sales of more than $1 billion.

Mullen will be CEO of the combined company, which will be based in Cambridge, Massachusetts, Biogen’s hometown. William H. Rastetter, IDEC’s chief executive, will be executive chair-man of the new entity, to be known as Biogen Idec.

“The companies’ scien-tists and management teams have known and respected their counter-parts for years,” Rastetter says.“This led earlier this year to a collaborative agreement in cancer, out of which grew both a closer relationship and the recog-nition that we each had the strategic pieces that the other was looking for.”

Biogen, which has specialized in developing drugs for autoimmune dis-eases, wanted to move into oncology, Mullen says. IDEC’s specialty is oncology, but it was beginning to work on the treatment of autoimmune diseases.The companies have 10 products in clini-cal development.

Based on sales, the new company would rank behind Amgen and Genen-tech in the biotech sector.

The board of Paris-based Pechiney unanimously rejected a $3.9 billion takeover bid by Montreal-based Alcan that would create the world’s largest aluminum producer in terms of sales.

Alcan, along with Switzerland’s Algroup, previously agreed to buy Pechiney in 1999, but the deal was scrapped after European regulators expressed concerns.Al-can and Algroup have since merged.

Pechiney complained that it had not been consulted before Alcan announced plans in July to launch an unsolicited tender offer to acquire the French company for a combination of cash and shares.

Alcan’s president and chief executive, Travis Engen, says,“This is a win-win offer that maximizes value for shareholders and stakeholders of both com-panies.”

The transaction would be contingent upon at least 50% of Pechiney’s shares being tendered.

Deposit Insurance Cor-poration of Japan acquired an undisclosed majority interest in the Osaka-based bank for $16.65 billion.The Financial Services Agency estimated that the government would hold more than 70% of the bank’s voting rights.

The bank submitted a restructuring program that could eliminate 4,000 of its 20,000 employees by March 2005. Salaries and bonuses will be cut by 30%. Resona’s top execu-tives were replaced.

This was the first public-fund injection into a major Japanese lender in four years.Auditors maintained that new regulations did not allow the bank to count deferred tax assets as part of its capital to the extent it had planned. 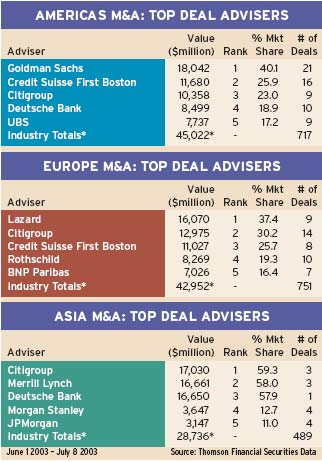