Milestones : Controversy Rages Over Who Should Police Securities Industry

CONTROVERSY RAGES OVER WHO SHOULD POLICE SECURITIES INDUSTRY

Shiller is warning that the bond market is in the same overvalued position as the stock markets in early 2000.” 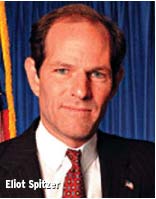 The latest skirmish in the battle over state versus federal regulation of the securities industry will take place in the US Congress in September.The House financial services committee is scheduled to consider a controversial Republicanbacked bill that would curtail the power of state securities regulators, such as New York State Attorney General Eliot Spitzer.

Democratic lawmakers fighting the proposal say it would be against investors' interests to hand over so much responsibility to the US Securities and Exchange Commission.After all, they point out, the states are often first on the scene when investors get burned and the SEC is frequently far behind.

Under the US Constitution, a system known as federalism divides power between the national and state governments.This ambiguous system of overlapping and competing powers leaves room for constant wrangling over who is in charge of what.

The states say the $1.4 billion Wall Street settlement of conflict-of interest charges in April 2003, which was spearheaded by Spitzer, provides a valuable model of state-federal cooperation and has helped restore investor confidence following recent corporate scandals.

The new House bill, sponsored by Rep. Richard Baker of Louisiana, however, would require that future fines against Wall Street firms go to the SEC for return to victims of securities-law violations.A large part of April's settlement will go to the cash-strapped states.

Congressman Barney Frank of Massachusetts, the ranking Democrat on the House committee, says the Baker bill is a blatant attempt to knock the states out of the business of regulating investment banks. Baker and SEC Chairman William Donaldson say national markets require a national regulator to ensure uniform practices.

Most observers agree that a proper balance must be maintained between regulatory efficiency and the protection of investors. But recent events alone have shown that there can never be too many cops on the beat. 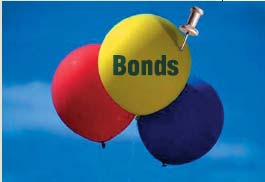 The bond market vigilantes are back. The steep rise in yields in global bond markets in recent months could threaten to derail the nascent economic recovery. Mortgage rates in the US already are creeping up and refinancing activity is slowing.

Robert Shiller, the Yale University economics professor who accurately forecast the technology bubble in the late 1990s, is turning his attention to a new bubble. Making the rounds of the TV talk shows, Shiller is warning that the bond market is in the same overvalued position as the stock markets in early 2000

Most Wall Street economists are less concerned than some academics about a bond bubble. They say the selling that has clobbered bond prices since deflation fears eased in mid-June is merely a correction. It will take a more convincing upturn in economic data to confirm the US administration's optimistic forecasts, they add. Meanwhile, higher borrowing costs are being offset to some extent by the wealth-creating effect of a rising stock market.

Eventually, however, the need to finance a widening US budget deficit could give the bond vigilantes their day in the sun. That could trigger an even more serious collapse in prices and a steeper yield curve. US bond mutual fund assets have increased by $300 billion in the past two years, as antsy investors fled the bear market in stocks. The bond market's exits could suddenly look awfully narrow if everybody tries to get out at the same time. If the bond vigilantes get their way, the Federal Reserve could be forced into raising short-term rates sooner than it would prefer in order to prop up bonds. 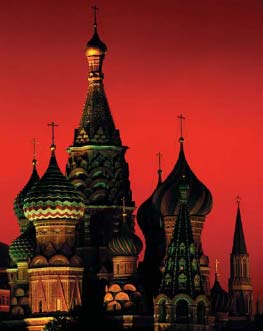 Economic growth in Russia, the Baltic republics and Ukraine is likely to surpass most economists’ expectations despite a continuing decrease in the price of oil, according to a forecast released by the University of Michigan’s William Davidson Institute.

Growth in the former Soviet Union is derived in a significant part from internal demand and trade and is somewhat isolated from global economic conditions, the report says. Russia’s gross domestic product is expected to rise 5% in real terms in 2003.

The latest economic indicators from the FSU countries paint a picture of strong and continuing growth, in contrast to the slow growth in developed countries, says Jan Svejnar, executive director of the institute. The WDI has been analyzing economic and business conditions and promoting policy change in transition and emerging-market economies for the past 10 years.

“The broadening rebound in the former Soviet Union stands in contrast to the slower growth and higher unemployment in the Central European economies that have become more cozy with the West,” Svejnar says.

In Central Europe, only the Czech Republic and Hungary have achieved healthy employment levels, he says. Unemployment in Poland and Slovakia stands at about 18% and shows no sign of improvement.

Actually, the high unemployment rates throughout Central Europe are good signs for investors, the WDI report says. Taken together with the relatively strong growth rate in the region and lack of inflation, the strong pool of available labor bodes well for investments to pay off, it says. Investors seem to have spotted this potential already: The region is one of the highest recipients of foreign direct investment. 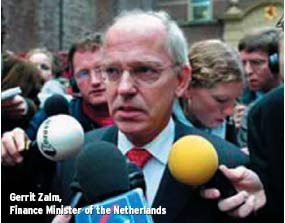 Pressure is building on the European Union to fine France and Germany billions of euros for not meeting deficit limits under the EU's stability and growth pact.

Finance Minister Gerrit Zalm of the Netherlands says the time has come to start obeying the rules. Countries must be fined for breaching the deficit limit of 3% of gross domestic product for three years in a row, or the EU is really in trouble, Zalm says.

European Commission spokesperson Gerassimos Thomas says the fines could be imposed on three-time violators any time from December 2003 to the spring of 2005. France and Germany, the eurozone's two biggest economies, exceeded the 3% limit in 2002 and seem likely to do so in 2003 and again next year.

The EU set tight budget rules in 1997 at the insistence of Germany, which was reluctant to give up the deutschemark and saw the stability pact as a way of protecting the value of the euro.Although Germany has said it will make an effort to meet the deficit limit, France wants to bend the rules. French President Jacques Chirac has angered other EU countries by calling for the stability pact to be relaxed.

Countries such as Austria, Finland and the Neth-erlands, which are taking steps to curb their deficits, say there is no room for softening the pact.They say that if France and Germany don't act now to make their over-regulated economies more competitive, there will be even more dire economic consequences in the future.