The volume of initial public offerings worldwide this year is running ahead of last year’s pace, with Credit Suisse First Boston climbing to the top of the global IPO league tables, according to Dealogic.

In the period from January 1 through August 3, 2005, global IPO volume reached $83.2 billion, an increase of 14% from the same period of last year, while the number of deals rose to 896 this year from 750 a year earlier, Dealogic says.

CSFB, which plans to drop “First Boston” from its name on January 1, 2006, rose from number-six position last year to claim the lead in the year-to-date running, with a deal value of $6.88 billion from 31 issues. 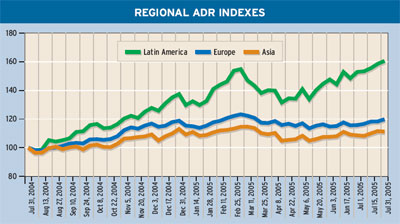 Zurich-based Credit Suisse says the new brand name will be used on all CSFB sites, along with a logo featuring two sails. This will coincide with the combination of the New York-based investment bank with the group’s retail and private banking business.

Goldman Sachs held onto its second-place position in the global IPO league tables, with a total of $6.44 billion from 28 issues so far this year. Last year’s leader Morgan Stanley slipped to number three, with $6.12 billion, according to Dealogic. UBS and Merrill Lynch filled out the top five positions for 2005.

IPO volume represents 28% of all equity capital market volume so far in 2005, up from 22% in the same period last year, Dealogic says.

The value of deals arranged by CSFB so far this year is nearly double the $3.62 billion total from the 22 deals it handled in the year-earlier period.


Meanwhile, Bank of New York said Royal Dutch Shell selected it as depositary for its Class-B ADR program. The Class-B shares are the result of the unification of UK-based Shell Transport and Trading and Royal Dutch Petroleum of the Netherlands.

Xinhua Financial, Hong Kong-based provider of information on China’s financial markets, selected Bank of New York as depositary for its Level-1 ADR program. The ADRs trade on the over-the-counter market, and the ordinary shares are listed on the Mothers section of the Tokyo Stock Exchange.

JPMorgan Chase was named successor depositary for the Level-1 ADR program of Rio Tinto Ltd., whose shares trade on the Australian Stock Exchange.

This article appeared in issue September 2006