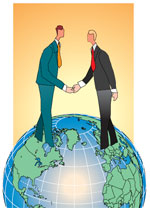 When Abbey National, then the sixth-largest bank in the UK, agreed in July 2004 to a takeover bid of about $15.5 billion from Banco Santander, Spain’s biggest bank, analysts said the deal could herald a wave of major cross-border bank mergers in Europe. The long-awaited consolidation of the European Union’s financial services industry was under way, and the creation of a pan-European system would result, they said.

It wasn’t until a year later, however, that the next big cross-border acquisition took place in Europe’s fragmented banking sector.

In July 2005 Italy-based UniCredito agreed to acquire Germany’s HVB and its Bank Austria Creditanstalt unit with an extensive network in the fast-growing economies of Central and Eastern Europe.

The $18.7 billion bid to take over Germany’s second-largest bank followed failed attempts by UniCredito in recent years to form alliances with Spain’s Banco Bilbao Vizcaya Argentaria, or BBVA, and with Commerzbank, also of Germany.

“Together, UniCredito and HVB will be a strong new force rooted at the heart of Europe,” says UniCredito’s chief executive, Alessandro Profumo. “We will become the first truly European bank.”

While the deal was the largest cross-border banking merger ever in Europe, analysts say that mega-mergers that cross Europe’s borders will remain an anomaly. This is not the start of a frenzied game of musical chairs that will have Europe’s big banks aggressively seeking new partners, they say.

Politics and cultural differences, as well as differing legal, regulatory and tax systems, make it difficult for any EU banking monolith to emerge, industry participants and analysts say.

“There won’t be many more transformational deals,” says Stephen Jancys, vice president of mergers and acquisitions at New York-based Trenwith Securities, an independent investment banking affiliate of BDO Seidman and BDO International, which has a global network of 600 offices that provide financial advice and consulting services.

The volume of middle-market deals in the European financial services industry will continue to be much larger than that of the major mergers, Jancys says.

Trenwith Securities represents both US and non-US companies in middle-market transactions. Its clients range from middle-market businesses to multinational corporations seeking to acquire or divest middle-market companies.

“European banks need to step up their domestic mergers to avoid being absorbed by international rivals, including the big US banks,” Jancys says. “They need to become bigger fish so that they are not takeover targets themselves,” he explains.

There will be more consolidation in European financial services, particularly in the fragmented markets of Italy and Germany, Jancys adds.


The rapid growth of the Turkish economy and the onset of EU-accession talks stimulated a number of acquisitions in Turkey’s banking sector this year by European financial institutions.

Rabobank of the Netherlands agreed in July to buy a controlling interest in Sekerbank, the bank of the sugar-beet cooperatives, for about $350 million.

“We are developing bank partnerships in a selected number of fast-growing Central and Southeastern European countries,” says Harry de Roo, member of the managing board of Rabobank International. “Our aim is to develop local community banks which operate close to their customers, with a particular focus on non-metropolitan areas,” he says.

Sekerbank has 201 branches, of which 130 are located outside Istanbul and Ankara.

UniCredit of Italy paid $1.46 billion in May to acquire a 57% controlling stake in YKB, or Yapi ve Kredi Bankasi, in cooperation with the Turkish finance company Koc Finans.

Earlier this year, BNP Paribas of France acquired 50% of the holding company that controls Türk Ekonomi Bankasi, or TEB. Meanwhile, Deutsche Bank bought the remaining 60% it did not already own of Bender Securities, a mid-size brokerage house based in Istanbul. The German bank also acquired a commercial banking license in Turkey.


Rise of Private Equity
Private-equity investment in European financial services is expected to grow and is a potentially significant trend, Page says.

In recent years, private-equity funds have been getting bigger, following a greater focus on alternative investments, resulting in a significant increase in the amount of money these funds have to invest. Fund managers are becoming adept at operating within the regulatory regime of European financial services and at managing compliance issues, according to PwC.

“There are plenty of opportunities for private equity funds to participate, such as in buying non-performing loans in Italy, Germany or emerging Europe,” Page says.

The availability of billions of dollars of relatively low-cost credit that the major banks are offering has enabled private-equity funds to leverage the companies they are acquiring, according to the PwC report.

“Some market watchers are talking about a potential credit bubble, but the major financial services deals seen in Europe are all built on recurring cash flows,” it says. “It is precisely the cash-generating nature of these financial services businesses that makes them particularly attractive to private-equity investors,” it adds.

Increased activity from private-equity firms in the financial services sector may increase the pressure on major corporations to make acquisitions earlier than they otherwise would, it predicts.

In one of the biggest changes in the German banking industry in many decades, the country’s Landesbanks, which are partially state-owned, lost their government backing in July. These guarantees, which had enabled them to raise money at lower interest rates than their private-sector competitors, were eliminated at the EU’s insistence.

In what analysts describe as a healthy trend, the Landesbanks, along with the municipally owned savings banks, now have to compete on a level playing field with the country’s private banks. Some of the Landesbanks could seek merger partners as they try to defend their market shares in the newly competitive environment.

While the Landesbanks have become more like commercial banks, the transformation is not yet complete, according to New York-based rating agency Standard & Poor’s. The Landesbanks need to continue with restructuring efforts and successfully implement their game plans, the rating agency says.