September 01, 2005
Author: Laurence Neville
It might seem as if we live in risky times, but financial markets are now less volatile than they have been in decades. How has this come about, and is it sustainable? 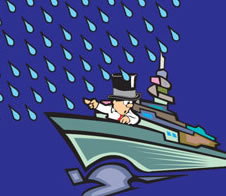 If you read the newspapers, you could be forgiven for thinking the world is an ever more volatile place. Terrorism dominates both the domestic and foreign news pages. Natural disasters such as earthquakes, the Asian tsunami and hurricanes in the United States seemingly occur with ever-greater frequency. And in the economics world, the price of oil continues to hit record highs before dropping almost as suddenly.

But while our perception of volatility has increased—no doubt partly explained by the ubiquity of information in the Internet age—the statistical reality is the exact opposite: The global economy is more stable than it has been for years—despite the shocks of terrorism and ballooning oil prices. Bond and equity market volatility is at historic lows in the US and other major markets.

The nature of the cornerstone of this newfound economic stability will come as a surprise to many. According to Kenneth Broux, financial market economist at Lloyds TSB in London, the global economy is less prone to wild swings because it is enjoying a prolonged and unprecedented period of low inflation. “The main reason that we have economic stability at the moment is that inflation is under control. And the reason for that is China,” Broux says. China in itself is not the cause of stability; indeed, some protectionist US politicians denounce the dislocations it is causing in the domestic job market. But its growing prominence in international trade has created the conditions for stable economic growth.

Manufacturing in the US, the UK and increasingly in continental Europe has, in effect, been outsourced to China and other low-cost economies. “Import costs are much lower [than domestic production], and margins are much higher, hence continuing growth and strong equity market performance,” says Broux. In addition, if developed-world demand is reduced, all that is reduced is imports—not economic growth.

With inflation kept low thanks to increasing volumes of cheap imports, central banks have been able to keep interest rates low, which has resulted in healthy and stable growth. The US economy has been growing at more than 2% for nine quarters, and it looks as if that will continue for the third and fourth quarters of this year. Manufacturing has picked up, and employment is robust. Such a smooth rate of growth is unprecedented in economic history; traditionally, economies grow in fits and starts.

While the stable economy and low-inflation environment have had a major bearing on the fixed-income market, additional factors specific to the market have also been important in keeping bond market volatility low. Aleksandar Kocic, derivative strategist in fixed-income research at Deutsche Bank in New York, says that changes in the supply and demand dynamics of the US mortgage market have had a major impact on volatility.

At the same time, hedge funds have become enthusiastic suppliers of volatility. “[In 2000] they accounted for only 10%-15% of all the volatility flows,” notes Kocic, who says their activity is now on the same scale as mortgage lenders. “With declining demand from the mortgage community and the growth of the hedge funds, we effectively transitioned from a market which was demand driven to one where supply and demand were well balanced,” he explains. Hence market measures of volatility decreased.

The world’s central banks, particularly the US Federal Reserve, also deserve a share of the credit for the stability of bond markets. “There is little uncertainty about what the Fed is going to do, which takes out most of the volatility from the curve,” says Kocic. “There is a market free of noise with virtually no fundamental uncertainty regarding rates,” he adds.

The result has been unprecedented stability. One measure of fixed-income volatility, the Merrill Option Volatility Estimate (Move) index, which shows market expectations of treasury prices for the coming year, has fallen consistently since 2003, when the Fed began a policy of indicating its intentions toward rates. The Move index recently hit a seven-year low, taking it to roughly the same level as just before the Russia crisis in 1998.

What the Models Don’t Show


In the equity market, volatility is at a similar historically low level as fixed income. The Chicago Board Options Exchange Volatility Index (Vix) is the most commonly used measure of stock market volatility and is essentially a measure of the demand for protection from a falling S&P100.; When demand for protection is high, the Vix soars; it hit 172.79 during the crash of 1987. When people are comfortable, it falls.

Recently the Vix fell into single digits for the first time in a decade, having been in the 20s for most of the period from 1996 to 2003. “Why is volatility so low? Is this abnormal?” asks Sebastian Lancetti, quant strategist at Dresdner Kleinwort Wasserstein in London, rhetorically. “It is explainable if you look at the exceptional profit growth,” he says.

The reasons for low equity volatility are the same as those for the global economy or the fixed-income market: Economic growth, profit growth and productivity growth continue to be strong in a low interest rate, low inflation environment. “Realized volatilities are driven by good profit cycles, so good figures from corporates justify very low levels of volatility,” says Lancetti.

But while a low Vix level should spell contentment among investors and a steady immediate future in the equity market—in February 1996, when the Vix was last below 10, the stock market was set for one of its strongest periods of growth ever—investors should be cautious of over-reliance on such indicators. “Forecasting volatility is extremely difficult,” notes Lancetti.

Implied volatility measures such as Move and the Vix present problems in predicting future market behavior because of the way they are constructed: Most models are mainly driven by previous prices. That means that implied and realized volatilities look much the same. “In other words, contrary to what is often believed, implied volatilities include very little additional information,” says Lancetti.

“Deceleration is on the way,” he notes. In Europe, 2005 earnings growth is expected to be around 9% compared to over 20% in 2004. In the US it is the same: Forecasted earnings growth was over 20% in 2004 but is expected to be 14% this year. “We are moving toward a macroeconomic environment where realized volatilities should be around 13% for the S&P500; and implied volatility therefore around 15% to 16%,” he says.

As if decelerating profit growth were not enough to drive volatility, there are other dangers lurking on the horizon. The threats with the highest profile in the media are not necessarily the most dangerous to the global economy, according to Lloyds TSB’s Broux. “Terrorism is a sideshow, and natural catastrophes such as the tsunami do little to impact global trends,” he says.

Broux notes that the performance of the UK stock market following the bombings in London was extraordinary, with the FTSE100 regaining its losses the following day. “Even following 9/11, the world’s central banks flooded markets with cash, and the economy rebounded quickly,” he says. The huge liquidity in the global financial system—and the prevalence of hedge funds—means such dislocations are now swiftly corrected.

Likewise, oil prices, which have almost doubled in the past two years, are something of a red herring. “The western world has become so much more efficient since the 1970s,” says Broux. “Much of the energy-intensive activity has been outsourced to low-cost countries like China.”

However, there are a number of potential blow-ups visible. The clear imbalances in the US economy are a threat to world stability, according to Broux. “They could prompt a collapse in the dollar,” he says. But perhaps more important are the risks facing the economy that has done so much to ensure global stability in recent years: China.

“History shows that it is inconceivable for a large nation like China to grow at 9.5% over a long period without any hiccups,” explains Broux. “Something has to give over the next six to 12 months. There must be misallocation of funds occurring. It is also likely that real inflation is higher than the official 1%. The financial system in China is very vulnerable to shocks.”

That vulnerability to shocks is one of the reasons why the Chinese government took so long to respond to calls to revalue its currency. Ironically, the minor revaluation that occurred in July—vociferously demanded by many in the US to try to staunch the country’s trade deficit with China—could spell the beginning of the end for stability in the US fixed-income markets and possibly its economy.

As China and the rest of Asia have grown largely through exports, there have been record flows of foreign currency—much of it dollars, as the US is China’s main trading partner—entering the region’s central banks, says Glenn Kim, head of public sector debt at Lehman Brothers in London. According to the US Treasury, Asian central bank reserves five years ago were around $1 trillion and now stand at $2.3 trillion.

China’s central bank reserves have grown from $170 billion in 2001 to over $610 billion at the end of 2004. Broux estimates that China’s reserves now stand at around $800 billion. The reason why these reserves are important to the US fixed-income market and its economy is straightforward: In order to stay competitive and keep its currency stable, China has used its reserves to buy foreign bonds.

“Consequently, there is a virtuous cycle where long-term bond yields are artificially low, especially in the US,” says Broux. That has resulted in the US housing market being inflated—US mortgage rates are derived from the 10-year bond yield—and has kept the economy buoyant. So while the Fed has tightened monetary policy from 1% to 3.75%, financing conditions have not become expensive because of the low 10-year yield.

If the yuan’s value continues to rise, there will be less need for China to buy treasuries and less of a lid on bond yields. “Also, it is significant that China has abandoned the peg to the dollar and instead is using a basket of currencies,” says Broux. “It means they are more likely to buy bonds in other currencies, and US bond yields will increase.”

Investors seem prepared to ignore the potential risks in the market. According to Dresdner Kleinwort Wasserstein’s Lancetti, there has been little change in investor behavior recently. “A few months ago [following the downgrades of Ford and GM] there was an increase in risk aversion, and people rotated slightly to higher-quality assets,” he says. But since July that caution has dissipated, and people are keener to take on higher risk.

“Investors use short-term arguments to justify their behavior, with arguments such as ‘Summer is usually very quiet,’ so they are happy to sell short-dated options,” says Lancetti. “They have a very relaxed attitude to risk.” The fact that investors are still expecting an 8% to 9% return on equities implies they will be employing risky investment strategies.

Perhaps the last word should be left to Alan Greenspan, who has guided the US economy through so many tribulations in the past two decades. In his semi-annual report to Congress, he noted that risk takers have been encouraged by what they perceive to be economic stability as a result of significant declines in measures of expected volatility in equity and credit markets.

But Greenspan, renowned for his careful use of language, added, “History cautions that long periods of relative stability often engender unrealistic expectations of its permanence and, at times, may lead to financial excess and economic stress.” Such uncompromising talk does not come easily to Greenspan. Investors would do well to heed his warning: Volatility is coming.