September 01, 2005
Author: Gordon Platt
Despite the lessons learned in recent terror attacks, companies are still unprotected against the catastrophic losses they could face in the event of another attack. 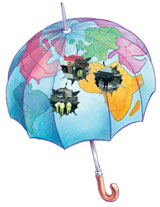 Four years after the terrorist attacks on the World Trade Center in New York and the Pentagon in Washington, DC, there are gaping holes in the insurance coverage available to compensate corporations for losses following any future large-scale attack, according to industry experts. The “9/11” attacks caused insured losses of more than $30 billion, making them the single most costly event ever recorded in the history of the insurance and reinsurance industry.

Scenarios in which total insured losses from a single event could exceed $250 billion are now considered as plausible, terrorism experts say. Under current conditions, such catastrophic attacks, or the accumulation of medium-size terrorist attacks within a limited time frame, may remain beyond the capability of the insurance industry to absorb alone, according to the Paris-based Organization for Economic Cooperation and Development (OECD).

A major terrorist attack could bankrupt companies and destabilize some economies, the OECD warned in a report released just two days before the London bombings in July. “Data on estimated maximum losses from terrorist attacks provided in the report are not meant to be alarmist or to scare the readers, but to raise awareness of the magnitude of potential risks entailed by new forms of terrorism, and to put the issue of market capacity into perspective,” says Cécile Vignial, principal administrator of the financial affairs division at the OECD, who directed the study.

In the United States, for example, the property and casualty insurers’ surplus supporting all commercial property, general liability and workers’ compensation insurance is about $114 billion, according to the Insurance Information Institute.
On July 7, the day of the London attacks, RMS was scheduled to announce the release of its upgraded global terrorism risk and terrorism scenario models. “We delayed the announcement until the following week in order to avoid the appearance of being opportunistic,” Ulrich says. Under the worst-case scenario of a two-megaton nuclear bomb being detonated at the Empire State Building in New York City, losses could total $500 billion or more, according to Ulrich. The RMS terrorism scenario model has been expanded to cover every country in the world. The model enables users to estimate losses and casualties for multiple lines of business for 30 attack scenarios, ranging from conventional bombs to chemical, biological, radiological and nuclear, or CBRN, attacks.

Because of the potential magnitude, spread and persistence of damages caused by CBRN attacks, these exposures are for the time being generally considered as uninsurable by the insurance industry and are excluded from most coverage, according to the OECD study. It says CBRN risks represent a growing source of concern, since these methods may be an increasingly plausible scenario of attack.


cThe most worrying trend, according to the OECD, may be the terrorists’ ability to exploit the vulnerabilities and diffusion capacity of large critical networks, such as aviation, maritime and other forms of transport, the water supply, energy and telecommunications, in order to maximize the destructive potential of attacks.

Aaron Davis, vice president of property syndication at insurance broker Aon in New York, says the insurance market cannot operate without some form of a terrorism risk backstop. A government safety net is needed to maintain terrorism insurance availability at an affordable price, he says. However, a June 30 report from the US Treasury recommended against extending the current program of government guarantees when it expires at the end of 2005. “The Treasury report downplayed the potential for market disruption and was unrealistic in its assessment of the private industry’s ability to provide cover,” Davis says.

Treasury secretary John Snow told the House Financial Services Committee on July 13 that continuing the program would hamper the development of a private market for terrorism risk. Snow said the Bush administration would accept a temporary extension of the post-9/11 program only if it included an increase in the percent of the losses paid by commercial insurers, as well as a large increase in the amount of losses that would trigger government participation. “Any compromise agreement to extend the federal program will look quite different from the backstop currently in place,” Aon’s Davis says.

Among OECD countries, public-private partnerships exist in Australia, France, Germany, the Netherlands, Spain and the United Kingdom, as well as the US. Terrorism insurance take-up rates remain low, however, the OECD says. Less than 3% of eligible firms have contracted with the German compensation scheme, it says. About half of all companies are insured for terrorism risks in the US.