September 01, 2008
GREEN FINANCE
Despite the drumbeat of headlines about the troubled banking and finance industries, one area is coming up green. 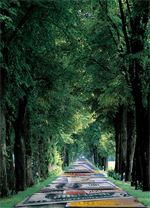 With global financial markets languishing in the doldrums, “green financing” is emerging as a key lever to stimulate a sustainable global economy. Record-high oil prices and the increased desire by the public and government to stop global warming are sparking big investments in innovative projects. Financial institutions, venture capitalists, investors and traditional non-green businesses are pouring money into clean, renewable-energy technologies, while other industries’ financing remains stagnant.

“Yes, the broader credit markets are a bit troubled at the moment, but because of the space we’re in, there’s a tremendous amount of interest,” says John Keppler, president and CEO of Intrinergy, a Richmond, Virginia–based alternative-energy firm. “We are still getting deals done, which is a nice thing to be able to say in this market,” he adds.

Developers of wind, solar, biofuel, biomass and waste, energy-efficient technologies and other emerging energy options are securing funding where it was once hard to find. “Companies researching and developing alternative sources of energy, which once found it difficult to secure funding, are now the darlings of venture capitalists,” says John Challenger, CEO of Challenger, Gray & Christmas, a global outplacement and research firm.

Total global investment in clean-energy technologies jumped 60% in 2007 to $148.4 billion, according to London–based energy research firm New Energy Finance. Wind-power technology attracted 43% of new investment, solar 24%, biofuels 17%, and biomass and waste 9%, with the other 7% divided among other renewable fuels, low-carbon technologies and energy efficiency.

Fear Drives Growth
High fossil-fuel prices and fear about long-term supplies and geopolitical risks are fueling interest in new, renewable forms of energy like never before. Also big factors are policymakers’ and citizens’ growing desire to tackle global warming, and banks and companies such as BP, Wal-Mart and Intel’s acceptance of the business case for green investment. Changes in consumers’ energy use and technology innovations are further stimulating green-energy financing.

“Today, we are seeing the beginning of a powerful response in terms of public policy, technology, consumer behavior and company strategies,” Daniel Yergin, chairman of Cambridge Energy Research Associates (CERA), said in testimony before the US congress in June. CERA, based in the Boston area, advises energy companies, financial institutions, technology providers and governments on energy markets, geopolitics, industry trends and strategy.

But there is also a simple explanation for the “green”-money trend: “People sense that environmental investing is the next big thing,” says Frank Morris, founder of Ecologic Advisors, a New York-based investment advisory firm specializing in environmental investing. Currently accounting for only 5% to 6% of global power generation, renewable energy also offers plenty of room for growth.

Focusing on venture capital in North America, Europe, China and India alone, a report from San Francisco-based market-research firm Cleantech Group shows venture investors poured a record $2 billion into clean-technology companies (“cleantech”) in this year’s second quarter. That’s up 58% over the year-ago period and 48% higher than the first quarter.

US firms received a record $1.49 billion in 54 financing rounds in the second quarter this year, accounting for about 74% of the total, according to Cleantech. European companies (including Israeli firms) recorded $257 million in 31 disclosed financing rounds, comprising 13% of total investment. Perhaps surprisingly, European venture investment was the lowest in three quarters, as the number of large energy-generation deals declined. Chinese cleantech companies raised $235 million in venture capital across six rounds, accounting for about 12% of the second-quarter total. The largest single investment was $100 million in growth capital financing for Yingbin Nature, a sustainable forestry-product company.

IPOs Fuel Market Interest
Last year was a great one for green IPOs and stock offerings as clean-energy companies raised $27 billion on the world’s public markets in 2007, more than double the preceding year, according to the New Energy Finance/UN report. The highlight was December’s $7.2 billion offering for Iberdrola Renovables, a wind-energy spin-off from Spanish power giant Iberdrola. It was the second-largest IPO of 2007 and the biggest Spanish IPO ever.

Amid overall capital market weakness and the credit crunch, financing of cleantech in the public markets slowed to a virtual halt in the first quarter before rebounding in the second quarter with about $4.3 billion in IPOs. The standout was the $2.5 billion June IPO of Portuguese EDP Renováveis, the renewable-energy subsidiary of Energias de Portugal listed on the NYSE Euronext Lisbon market.

One big potential IPO that people were expecting apparently will not happen now. Oil giant BP announced on July 29 that it has scrapped plans to spin off its investments in alternative energy for now. BP had considered an IPO and other options for its alternative-energy unit, thought to be worth $5 billion to $7 billion as a standalone business. BP joins venture capital firms and investment banks, which are banking on improvement in the public markets for green issues. The big banks are betting heavily on a revival, with Wall Street firms such as Goldman Sachs, Morgan Stanley, Credit Suisse, Lehman Brothers and Merrill Lynch having recently started or expanded investment banking groups dedicated to cleantech.

Smaller Deals
While the big projects draw much of the attention, the renewable-energy industry is traditionally focused on small, scalable projects. These projects, often involving just a few million dollars, entail small wind, solar, or biomass installations at a single site like a manufacturing plant, retail store or school. Typical of the companies involved in these smaller-scale developments is Intrinergy, a four-year-old privately held firm that provides renewable electricity to manufacturers and industrial customers by building, owning, financing and operating small biomass-powered energy cogeneration plants at or near the customer’s factory or facility. It uses advanced gasification and combustion technology to convert biomass and otherwise unused hydrocarbons (like wood residues, industrial scrap, fiber residues and alternative feedstock) into usable energy.

Intrinergy operates one plant in Mississippi and one in Germany. The firm is constructing a facility in Belgium and also planning or preparing projects in Delaware, Pennsylvania, South Carolina, Connecticut and the Dominican Republic.

“We were certainly early in 2004. Today, what we see on the customer-demand side is truly overwhelming,” says Keppler. “It’s driven by the tremendous increase in price of natural gas, oil and coal, coupled with a real focus on being a leader in improving that company’s impact on the environment.”

Intrinergy bears all the financing and operating risk, and the industrial customers agree to buy a certain amount of energy from Intrinergy over a period of time, Keppler adds. The customer has no up-front capital costs. Intrinergy also sells some of the energy to utilities, for which it receives “premium pricing” because of government mandates. In Germany, utilities are required to purchase renewable electricity at a regulated price that is higher than fossil-fuel prices, he notes.

A second example of the proliferation of smaller cleantech projects can be found in solar and wind energy. Craig Kline, a partner in the New York office of international law firm Troutman Sanders, represents banks that invest in renewable-energy projects. His legal practice group has helped complete 50 to 60 small-scale, distributed solar-energy projects (installations of solar panels on the roofs of stores such as Wal-Mart or Kohl’s, schools, prisons, office parks, etc.) and some wind projects. Each project ranges from $1 million to $10 million in cost, he notes.

Kline says banks often participate on both the debt and equity sides of these projects. They provide the construction financing and then take a full equity stake in the project after it is completed, receiving the tax-credit benefits of ownership. In a sale-leaseback transaction, for example, the bank will buy the solar installation at full price and lease it back to the developer. “The banks themselves are taking the financial risks on the project,” Kline says.

Banks Kline has represented include Wells Fargo and the US unit of Germany’s HSH Nordbank. In 2007 HSH Nordbank says it lead-arranged over $3 billion of project finance in renewable energy, making it one of the world’s leading financers in the sector.

Assessing the impact of banks’ write-down troubles on renewable project financing, Kline says it has reduced competition for deals, but he sees no shortage of banks participating in green energy. “This is still the very beginning of a new trend in development of energy infrastructure in the renewable-energy space,” says Kline. “We’re going to see a tremendous amount of investment.”

This article appeared in issue September 2008