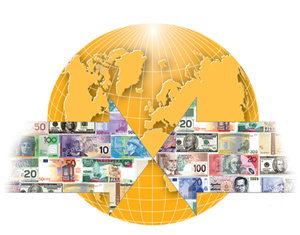 Calls for a super-sovereign reserve currency to replace the dollar are going nowhere fast. The Teflon dollar is

brushing off everything thrown at it by the BRIC countries (Brazil, Russia, India and China), and analysts say there is no viable alternative to the dollar as the world’s numeraire, or unit of account in the global financial system.

Asian Tiger economies continue to buy dollars to hold down their own exchange rates and maintain their trade surpluses. The dollar remains by far the choice of central bankers around the world as the best place to invest their reserve assets, analysts say. This is borne out by the latest data. The International Monetary Fund’s report on the currency composition of official foreign exchange reserves of 140 member countries showed that the dollar accounted for 65% of the total at the end of the first quarter of 2009. That was the highest since 2007 and well above the 59% share in 1995.

The search for a new global reserve currency is at a very preliminary stage, says Tyson Wright, senior foreign exchange trader at Custom House, a provider of global payment services based in Victoria, British Columbia, Canada. “The dollar is a stronghold, and efforts by central banks to diversify their reserve holdings are long-term strategies that will unfold gradually over the next 10 to 20 years,” he says. “Markets in euro-denominated securities are not as developed and not as liquid as dollar-based markets, particularly in the case of the debt markets,” he notes.

Three China-based companies used the renminbi to settle cross-border trade deals for the first time ever in July in an experiment aimed at reducing the country’s reliance on the dollar. The Chinese government, meanwhile, continues to tightly control the exchange rate. China needs to open up its economy much further before the renminbi can be considered as a reserve currency, according to Wright. “There is no single currency that can rival the dollar,” he says.

The dollar has lost some of its safe-haven gains recently amid indications that the worst of the global financial and economic crises has passed, Wright says. “The euro and the dollar are in a tug of war and likely will hold to a relatively narrow range until it becomes clear what is happening with global growth and US inflation,” he says. Once the global economy recovers, the dollar will not necessarily be sold off, Wright says. “The US economy could outperform other economies, and inflation concerns could lead to higher interest rates, which would support the dollar,” he suggests.

Li Lihui, president of the Bank of China, the country’s largest foreign exchange bank, says that more and more companies will choose the renminbi to settle international trade deals as China’s economy strengthens and its financial market plays a more important role in the world. “This may sound reasonable, but it simply does not stand up to the historic tests,” says Marc Chandler, global head of currency strategy at New York-based Brown Brothers Harriman. “By that reasoning, for example, sterling and the yen should be larger invoicing currencies than they are,” he says. Almost half of Japan’s exports are invoiced in dollars, as are more than a quarter of Britain’s exports.

The fact that the renminbi remains unconvertible and illiquid warns against exaggerating the significance of the trade-settlement deals in local currency, Chandler says. At the annual summit of the Group of Eight industrialized countries in L’Aquila, Italy, in July, leaders rejected the BRIC initiative calling for reform of the international monetary order to reduce the role of the dollar. The G-8 indicated support for a stable and well-functioning international monetary system and encouraged countries to refrain from competitive currency devaluations.

At this year’s Strategic and Economic Dialogue between the United States and China, which was held in Washington in July, Chinese officials once again raised concerns that the record US budget deficit could undermine the value of China’s dollar holdings, which are estimated at $1.2 trillion. US leaders promised to curb the budget deficit and increase private savings.

Zhou Xiaochuan, governor of the People’s Bank of China, has called for the establishment of an open-ended fund denominated in the IMF’s special drawing rights to promote a greater role of the SDR as a reserve currency. But SDRs can only be held by central banks and are not used as currency, since there are so few in circulation.

David Woo, head of global FX strategy at Barclays Capital, based in London, says the extraordinary loosening of fiscal and monetary policy in the United States is the main reason the dollar’s dominant reserve-currency status is being questioned. “We continue to believe that the US relative fiscal stance will be the dominant driver of the dollar in the coming months,” Woo says. The major risk facing the dollar is fiscal sustainability and its medium-term impact on the ability of the Federal Reserve to maintain price stability, he says.

US Piling Up Debt Faster

Barclays Capital’s research suggests that the change in the relative supply of government debt between the US and the eurozone will affect the dollar-euro exchange rate to a greater extent than the long-term interest rate differential. It found that a 5% increase in the outstanding stock of US treasury debt relative to eurozone government bonds is associated with an 8% depreciation of the dollar on average.

“Of course, the fact that Germany is considering tax cuts and France has been floating the idea of E80 billion of public bonds to finance sunrise industries and strategic priorities would suggest that America is not alone in failing to bring public finances under control,” Woo says. “However, the size of the challenge facing the US appears to be still much greater,” he says. The outstanding stock of US treasury securities grew at double the pace of that of eurozone government bonds since the start of this year.

A year ago, Europe was being touted as the resilient zone, says Peter Hall, chief economist at Export Development Canada. “Inflation was the big worry, not recession,” he says. “Interest rates [in the eurozone] were hiked 25 basis on July 9, 2008. But the zone’s analysts were wrong. Along with the rest of the world, Europe tumbled,” he adds.

European economies, like most others, have announced big economic stimulus plans. “Unfortunately, they will be more muted than elsewhere,” Hall says. “Interest rate cuts were smaller and came later than in other big economies.” Western Europe has been slow to accept the severity of the global recession, according to Hall. “At this point, it is unlikely that Europe will lead a global recovery, but at the same time, a fulsome world recovery will not occur without Europe’s full participation,” he says.

In a report on the international role of the euro, the European Central Bank said in July that despite the market turmoil caused by the global financial crisis, the relative importance of major international currencies has remained largely unchanged. The euro has maintained its share in global financial markets, it said. The ECB also warned about the exposure of banks that made euro-denominated loans to countries in Central and Eastern Europe.

The foreign exchange market as a whole shrank in the six months to April 2009, reflecting the effects of the financial crisis on global trade flows and a decline in hedge fund trading. Foreign exchange volumes in North America fell 26.3% on an annual basis in April to $526 billion, the lowest since October 2005, according to the Federal Reserve Bank of New York.

“As market conditions have improved, the crisis has ebbed and risk appetites have returned, it should not be surprising to see foreign exchange turnover figures improve by the next report,” says Chandler of Brown Brothers Harriman. The dollar remained the most heavily traded currency in April, with its share of total transactions rising to 84.3% from 82.6% in October 2008.

“One of the persistent questions from investors is who is going to buy all of these treasuries the government is issuing to finance the yawning budget deficit,” Chandler says. “Ironically, thus far this year at least three countries—Germany, the UK and China—have failed [at various auctions] in selling the amount of bonds they intended,” he says. “The US has not had that problem.”

The US Treasury released its monthly TICS (Treasury International Capital System) report on July 16, reporting on capital-flow data for May. “Despite its threats to the contrary, China continues to be a net buyer of US treasuries, purchasing $4 billion in May and $68.9 billion over the past 12 months,” says Michael Woolfolk, senior currency strategist at The Bank of New York Mellon.

“The real concern remains ongoing foreign demand for US treasuries as issuance is expected to rise over the next several years on larger fiscal deficits,” Woolfolk says. Without greater foreign demand, domestic demand may not keep pace, he points out. “If so, higher interest rates will be the eventual outcome,” he says.

Steven Englander, chief foreign exchange strategist for the Americas at Barclays Capital in New York, says central bank accumulation of reserves has tended to be a sell signal for the dollar within the Group of 10 major economies. “This probably means that central bank reserve managers buy the dollar when the private sector is selling,” he says. “It also suggests that the unwillingness to have reserve holdings become more concentrated in the dollar will lead to ongoing pressure on it [the dollar] within the G-10,” he adds.

Emerging market central banks buy the dollar when the greenback is under pressure against their own currencies, Englander says. But they also sell the dollar against other G-10 currencies to rebalance their reserve portfolios, which exacerbates downward pressure on the dollar within the G-10, he says. Stabilizing the dollar during periods of weakness involves much more central bank buying of dollars now than in the earlier part of the decade, Englander adds. As a rule of thumb, large central bank accumulation of reserves tends to be followed by dollar weakness within the G-10, he says.