China opened the floodgates to new share offerings in June, releasing a torrent of initial public offerings to help soak up excess liquidityand cool an overheating stock market. The removal of the government’s nine-month-old IPO ban had the opposite effect, however, adding more fuel to the fire, as prices of new issues soared and investors became even more exuberant.

What started as a trickle of IPOs turned into a torrent, with China State Construction Engineering(CSCE) offering $7.3 billion of shares in July, the world’s biggest IPO in more than a year, and a long line of companies prepared to list on the Shanghai Stock Exchange. By early August the benchmark Shanghai Composite Index had more than doubled since last year’s low in response to China’s $585 billion economic stimulus program and a loose monetary policy.

Investors are betting with their renminbi that China could lead the world out of the global economic downturn.China’s economy will expand at a rate of 8.5% for the full year 2009, according to a report by Bank of Communications.The country’s gross domestic product will expand at a 9% rate in the third quarter and 9.8% in the fourth quarter, according to the report. China’s economic growth accelerated in the second quarter to 7.9% over a year earlier from 6.1% in the first quarter.

their first day of trading in Shanghai, jumping 90% from their offering price in the early going before settling with a gain of 56% on the day. The nation’s largest homebuilder, CSCE, plans to use the proceeds of its sale of a 40% stake to expand in residential construction. The firm is also known for its big public works projects, including the “Water Cube” swimming center for last year’s Beijing Olympics and the headquarters for state-run China Central Television.

China International Capital was the sole underwriter of the IPO for CSCE, China’s largest construction contractor by far. The IPO was the biggest since Visa’s $19.7 billion offering in March 2008 and was China’s fourth largest ever. It easily surpassed the $4.3 billion offering by Brazil-based VisaNet, the previous biggest IPO for 2009.

Sichuan Expressway, the first company in almost a year to go public in Shanghai,tripled in its July 27 debut, despite two halts in trading as circuit breakers attempted to slow its advance. The toll-road operator raised $262 million with China Galaxy Securities as the underwriter.

Smaller companies Your-Mart, Guilin Sanjin Pharmaceutical and Zhejiang Wanma Cable all rose sharply in their first day’s trading on the Shenzhen Exchange, which has operated a board for small and mid-size companies for the past five years. Shenzhen is planning to introduce a new exchange, ChiNext, later this year for startups and technology companies.

The Hong Kong Stock Exchange also has benefited from hopes for China’s economic recovery. BBMG, the biggest cement supplier in Beijing, rose 56% in its Hong Kong debut in July, as retail demand for its shares exceeded supply by 775 times. The company raised $768 million in the issue, which was underwritten by J.P. Morgan, Macquarie and UBS.

At least some of the money from a $1 trillion surge in lending by China’s state-owned banks in the first half of 2009 has helped to fuel the current stock market and property booms, which officials fear may not be sustainable.Rather than clamp down on lending, which could threaten the economic recovery, the authorities may prefer to keep flooding the stock market with IPOs until demand is finally sated.

Meanwhile, scores of companies are waiting to list on the Shanghai market. As Global Finance went to press, Everbright Securities, one of China’s leading brokerages, was planning to raise $1.6 billion in an IPO to fund its expansion. China Merchants Securities was also preparing for an IPO, and Chery, one of the country’s largest automakers,revived plans for a listing in response to rising auto sales and the booming stock market. 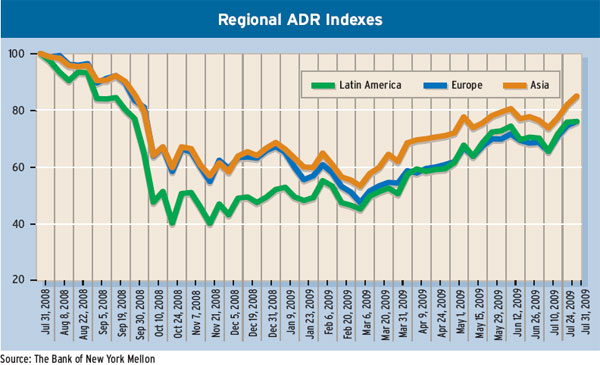