Far from collapsing under the weight of the recent financial crisis, the biggest emerging markets are powering the next wave of global growth. 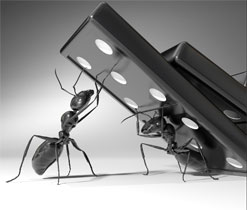 In its July World Economic Update,the International Monetary Fund said that the global economy was beginning to pull out of a recessionunprecedented in the post-World War II era and that global growth in 2010 would reach 2.5% instead of the 1.9% it earlier predicted. While some developed countries, most notably the United States, received upgrades, most noticeable was the substantial increase in expectations for emerging markets, with China, Russia, Mexico and India in particular sharply re-rated.

The IMF’s revised expectations raised questions about the trajectory of emerging markets’ growth and its potential to decouple from Western economic and financial systems—the latter a notion that many believed had died early in 2009. With the outlook for growth in many Western countries likely to remain sluggish for years to come as they struggle with budget and trade deficits, could emerging markets save the global economy?

Of course, one needs to distinguish between emerging markets to make the claim that they have saved the global economy. “Demand in Asia has certainly picked up, and Latin America is more resilient than in the past, but Central and Eastern Europe [CEE], for example, will be mired in recession for some time to come,” says Neil Shearing, emerging markets economist at independent macroeconomic research consultancy Capital Economics.

Globalization Is Not Standardization
Guillermo Kopp, global research fellow at the research and analysis firm TowerGroup, believes that part of the reason why expectations for emerging markets were downgraded so dramatically early in the year is that people tend to oversimplify globalization. Many observers wrongly assumed that globalization would result in equal pain being felt worldwide. “[But] it isn’t about standardization;it’s about increasing inter-dependencies between markets,” says Kopp.

This distinction also undermines the decoupling theory, though. “Despite improvements in some emerging markets, it is wrong to suggest that decoupling is occurring between developed and developing countries,” says Kopp. “Demand still comes largely from developed markets, and the ability of money to move instantly has a profound effect on emerging markets.” Templeton’s Mobius agrees: “It is ridiculous to suggest that emerging markets can be separated from developed markets in terms of trade and capital flows and communications. Decoupling simply does not exist.”

Instead, the current divergence of growth between developed and emerging markets can be explained by the different backdrop each had to the financial and economic crisis. Crucially, this is a recession—no economists are claiming a 1930s-style depression is imminent—attributable to too much leverage. However, leverage was not evenly distributed throughout the global economy. Instead, it was overwhelmingly concentrated on developed economies’ assets, ranging from personal mortgages to super-leveraged collateralized debt obligations.

Learning From Best Practice
It is true that Western financial markets can smother emerging markets’ economic growth, but it is also true that emerging markets have been shown to have the capacity to limit, to some extent, the effects of that smothering. As already noted, limited use of leverage—often at the behest of central banks and regulators less in the thrall of the financial behemoths that dominate the West—has been important. In addition, many emerging markets were both cautious before the crisis and proactive since it.

“While all emerging markets suffered in October 2008 when capital left emerging market assets for treasuries and dollars, those countries that had built up a cushion of reserves and had low debt-to-GDP ratios were able to weather the storm,” says Mobius at Templeton.

So while many Asian countries have been able to weather the storm, CEE has performed poorly because it borrowed from the West to fund consumption and investment without any thought of what would happen if liquidity dried up. “Consequently, the credit crunch has hit them hard, and they have to restructure the economies,” says Shearing.

Meanwhile, many emerging markets’ governments have played the financial and economic crisis extremely skillfully so far, introducing effective economic stimulus packages. “Brazil, which of the Latin American economies is the only country with the capability to affect global demand significantly, has been able to stabilize domestic demand through a package of reduced sale taxes,” says Shearing.

Similar tax cuts and other short-term measures have been notably effective marin China. The Chinese government’s move to boost bank lending to jump-start growth in advance of long-term economic stimulation measures—such as infrastructure spending—kicking in is credited with spurring growth, according to Chamie at RBC Capital Markets. “The adept policy response of many emerging markets countries has accelerated the healing process,” he says.

In addition to short-term government measures, a number of exporters and governments have done an admirable job in redirecting the focus of their economies, says Mobius. “Those countries with the ability to switch their focus from export-driven growth to domestic growth have maintained growth,” he says. “Asia learned its lesson in 1997 and 1998 and has benefited during this crisis as a result.”

Ironically, it was the Asian crisis of 1997 and the Latin American crises earlier that decade that caused many emerging markets countries to focus on exports. “The experience of Latin America and Asia in their crises of the 1990s, when both had borrowed heavily to fund domestic demand, led countries to focus on export-led growth,” says Shearing. Nevertheless, the flexibility that the Asian crisis in particular instilled in manufacturers has proved invaluable in the past year.

The move to an increased domestic focus for growth rather than solely focusing on exports is not just positive for the health of emerging markets but for the global economy generally. “Some emerging markets need to adjust their growth model, which was previously predicated solely on export growth. Clearly that model built up trade imbalances that caused some of the problems in the global economy we now see,” says Shearing.

Of course, the changed focus of some emerging markets countries on domestic growth is a long-term project that cannot increase consumption immediately. “That’s why it’s important that government demand has stepped up,” says Chamie. But combined with other measures to maintain economic capacity and stimulate consumption, the new focus on domestic growth is an essential part of limiting the impact that Western financial markets have on emerging markets’ real economies.

Chamie says, to avoid overheating their economies, governments must take a cautious approach to spending to increase demand. “It’s important that the gas is taken off government spending as private demand picks up,” he says. Nevertheless, most observers are confident that a new focus on domestic growth will not be the undoing of emerging markets. “As major emerging market countries switch back to a domestic focus, they should be able to avoid the crises of the past because they now have a bigger buffer of FX reserves and less external debt. Russia and Brazil, for example, are unlikely to experience a sovereign debt crisis similar to those in their past,” says Shearing.

If emerging markets are incapable of decoupling from the West—and nor would they want to, given its importance as a source of capital and demand for its exports—how can they insulate themselves from the West’s worst influences? Most obviously, emerging marinkets can follow the example of countries that have fared well in the current economic and financial storm—notably, China and India. As a result of a prudent build-up of reserves and swift policymaking by their governments—which have also helped to create an environment in which corporates can be similarly nimble—these countries look set to perform relatively strongly in 2009 and recover in 2010 more rapidly than previously predicted, as the IMF’s revisions have shown.

In the longer term, TowerGroup’s Kopp believes that emerging markets must actively seek ways to insulate themselves against the damage caused by the link between their domestic production and Western financial markets. “The finance-driven overheating of emerging markets is increasingly recognized as unsustainable,” he says. “Growth needs to be based on productivity rather than speculation.”

One solution to this problem is increasing regionalization, as is occurring in Asia and among the countries of the Gulf Cooperation Council—Bahrain, Kuwait, Oman, Qatar, the UAE and Saudi Arabia. “Trade growth within emerging markets is outpacing that between emerging markets and the US or Europe,” notes Mobius. “Asian countries now trade more with China than with the US, and the same thing will happen in Latin America, centered on Brazil.” 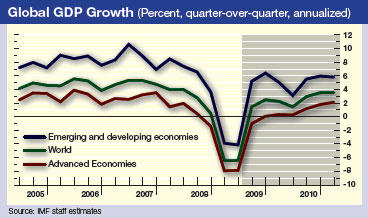 For emerging markets producers, regionalization has a number of benefits. “Firstly, it means that if markets in Europe or the US get in trouble, emerging markets have a replacement for part of their production within their region,” says Kopp. “Secondly, regionalization improves the productivity of industries because of greater competition and more economies of scale.” Mobius adds that intra-regional growth also provides a safety valve for the global economy and ultimately makes it more likely that emerging markets will be a stabilizing force in the global economy.

A second way in which emerging markets can insulate themselves is through a shift in the balance of power nin capital markets from West to East. As financial acumen increases in Asia, capital is increasingly circulating domestically or regionally in the equity, credit or structured finance markets. “Emerging markets countries are sourcing more funding regionally, and that is prudent,” says Chamie at RBC Capital Markets. “More generally, savings are now being recycled for investment within emerging markets, which will limit to some extent the vulnerability of emerging markets to the G-7 markets.”

As emerging markets’ capital markets mature, the risk management capabilities of governments, corporates, banks and other economic actors will improve, and there will be the opportunity for institutions to take a more balanced approach to risk than that taken by Western financial institutions. “Maturity is some way off, and regulatory challenges need to be overcome first, but it is still probable that capital markets will develop differently in emerging markets than in the West; already we’ve seen a more creative approach taken in microfinance and Islamic finance, for example,” says Kopp.

A New Power
Emerging markets, at least the larger developing countries, now have an unprecedented amount of power. Despite being significantly smaller in economic terms than the West, they hold bargaining chips that could allow them to shape globalization in a way that best suits their long-term economic development.

The most obvious bargaining chip is their superior growth.“Population growth coupled with the increasing sophistication and demand in emerging markets are changing the way these countries are growing,” says Kopp. “They are increasingly focused on finding creative ways to achieve their infrastructure and technology goals and are investing in innovation. It is creating vibrancy in emerging markets.”

Equally, the continuing holding of Western assets by emerging markets cannot be overlooked as a source of moral and economic power. “The emerging markets’ contribution to the global economy at the current time is as much its holding of US debt as its economic growth,” says Mobius at Templeton. “While these countries have diversified their holdings, they haven’t dumped US debt and caused a panic.”

It is clear that this is a world in which emerging markets will gain ever more power. How the global economy develops will depend on how they exercise it. “Emerging markets have always thought independently,” notes Kopp. “But to act independently they will need momentum and regulatory reform.” Based on their performance during the most severe economic crisis in living memory, it would be foolish to bet against them achieving both.