A TOUGH ROAD AHEAD

Spain’s banks and savings institutions are still reeling from the collapse of the country’s housing market. 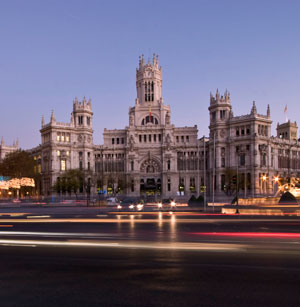 With Spain experiencing its deepest recession in 60 years, its banking sector stands at a crossroads. On the one hand, the largest Spanish banks are witnessing a drop in profits. On the other, the country’s small savings banks, known as “cajas,” are poised for possible bailouts. In the end, analysts say the banking system may have to consolidate. In fact, the government in Madrid is mandating it.

The country’s 46 cajas, non-listed regional savings banks whose profits are invested in social programs, have been hardest hit. At the core is their overexposure to the real estate sector, which has seen the end of a decade-long construction boom. While almost one-third of new homes in the European Union (EU) between 2001 and 2007 were built in Spain, home sales fell nearly 50% year-on-year in April. BBVA, Spain’s second-largest bank, predicts home prices will fall another 10% this year and 12% next year. More than a million homes remain unsold, and others stand unfinished.

Loans by cajas to real estate developers rose from €36 billion in 2001 to €243 billion in 2008. Compounding the problem is Spain’s 18% unemployment rate, which has boosted non-performing loan ratios (NPL). UBS predicts Spanish unemployment could soar to 25%. While May’s NPL ratio for the banking system was 4.56%, for cajas it was a higher 5.2% and mounting. With a 1997 Royal Decree taking oversight of cajas away from the central government and into the hands of regional politicians, client associations and even the Catholic Church, their lending programs have often been prompted more by vested interests than by sensible business practices.

UBS predicts cajas will require €112 billion in capital to restructure. “There are undoubtedly a few savings banks that are overexposed to the construction sector, and they will have to be rescued,” says Ernst Verbeek, responsible for Western European operations at First Data, an independent global transaction processor. Cajas have posted a nearly 40% drop in profits over the past year, with one bank alone, CajaSur, reporting a 90% decline.

The government unveiled a €9 billion bank rescue fund in June, known as the Fund for Ordered Bank Restructuring (FROB), which could be expanded to up to €99 billion. However, any bank that taps the FROB for assistance will be forced to introduce government-imposed structural changes. In addition to rescuing weakened banks, the FROB aims to finance mergers.

So far only one bank, Caja Castilla La Mancha, was bailed out, in March, after failing to complete a merger with Unicaja, a Malaga-based savings bank. To avoid a similar fate, several cajas have initiated merger talks. Caja Jaen plans to merge with rival Unicaja, with both Andalusian banks saying they will not require FROB assistance. Cajasur is considering joining the deal, to create the country’s sixth-largest caja, with €52 billion in assets.

“I think it’s safe to say there will be a consolidation, and that’s being driven by impulses from various areas,” says Verbeek, who worked for Certegy and American Express in Spain before joining First Data. “The government is keen to consolidate some of the smaller banks into bigger entities; there is pressure within the banking industry for efficiency, which is also a driver for consolidation; and there are some banks that, because they are generally weak, need to find a stronger partner to solidify their position,” he explains.

That’s easier said than done. Consolidation is sometimes complicated by political considerations. Caja Granada, for example, wants a condition of any merger talks to be that the new bank must establish Granada as its headquarters. Cajasol, based in Seville, will not consider a merger with Unicaja, based in Malaga, due to a centuries-old rivalry between the cities. Merger proposals among banks from different regions have become political hot potatoes.

While savings banks have posted profits, albeit declining ones, the outlook is cloudy. La Caixa, Spain’s largest savings bank, posted an 8% drop in first-half 2009 net profits, to €975 million, and boosted its loan-loss provisions by 175.5% to €746 million. “There will be losses in the Spanish banking system in 2010,” said Juan Ramón Quintás, chairman of the Spanish Savings Bank Association (CECA), at a conference this year. Citing an IMF study, Quintás said that if NPL ratios rise to 10%, some 20 banks would see their solvency ratios plummet to below the 8% level mandated by regulators. UBS predicts the NPL rate will hit 9% next year.

Loan-loss provisions are a key reason why Spain’s large publicly traded banks are, unlike the cajas, weathering the storm despite a tripling of NPL ratios over the past year. “In 2000 Spain’s central bank introduced a system of so-called dynamic provisioning to build up reserves against future, hypothetical losses,” says Alejandro Requejo, a director in global consulting firm LECG’s European competition policy practice in Madrid. “At the time, Spanish banks stiffly resisted the regulation, fearing they would lose ground against competitors.” The provisioning measure, he adds, ultimately helped them ride out the financial turmoil.

Under the system, banks are forced to accept counter-cyclical provisioning, setting aside reserves for future potential losses as loans are granted. Banks, which charged the regulation-reduced earnings amid a profitable credit boom, stashed away some $32 billion, allowing them to avoid hefty write-downs seen elsewhere in Europe.

Santander, the country’s largest bank, alone holds €6 billion in generic provisions. “Santander is coming out of this crisis clearly strengthened,” Santander chairman Emilio Botín recently told shareholders. “Our balance sheet, our business model and our prudent risk policy have clearly helped us around the worst difficulties. To further strengthen its balance sheet, the bank is swapping securities issued by subsidiaries for ones issued by the parent group. This also aims to improve its capital structure efficiency. Santander is offering a 15% stake in Santander Brasil, its Brazilian unit and largest Latin American asset, on the São Paulo exchange to fund growth. The bank this year also sold its Venezuelan operation to the Venezuelan government for $1.05 billion.

Finance minister Elena Salgado warns Spanish banks not to become overly cautious and instead strike a balance between risk aversion and growing their loan portfolios, lest they contribute to the recession. The outlook remains troublesome, with the OECD predicting a 4.2% GDP drop this year and another 0.9% next year, despite a hefty stimulus package. Bank of Spain governor Fernández Ordóñez predicts the budget deficit could hit 10% of GDP in 2010, with government debt rising from less than 40% of GDP in 2008 to more than 60% next a year. The government aims to slash the budget deficit to 3% by 2012.

Requejo says Spain’s strong banking system will prevail, though the road ahead will be bumpy. “Historically, the Spanish banking sector has been characterized by a good capacity to manage risk and has had high levels of profitability, efficiency and solvency,” he says. “This has allowed the system to cope reasonably well with the global financial crisis. However, the financial crisis poses some challenges to the Spanish banking system in the near future.”