Breaking Free Of The Broken Banks

In the wake of the global crisis in the banking sector, governments that have become sole

or partial owners of troubled banks are contemplating their options. 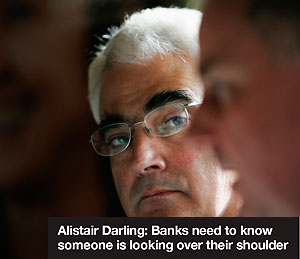 The future of many of the world’s largest banks will be determined by a group of officials in government offices. Many of these civil servants have no experience of the private sector, let alone of bank management. This new swath of bank owners also has a very different set of priorities to the conventional institutional or private shareholder. They are not so much interested in their dividends as in the governance of their banks, in their capacity for restructuring to ensure there is no repeat of the fiasco of 2007-2008 and, perhaps most importantly, in the timetable for their banks’ return to the private sector at a profit to the taxpayer.

Banks have identified three areas where they will be expected to comply with government priorities. First, they are having to pull their lending in line with government commitment to boosting the economy, or explain why they are not prepared to comply. Second, banks’ executives are having to watch their remuneration packages to ensure they are not flagrantly excessive and likely to incur embarrassment for their state owners. Finally, banks are having to review their structures to respond to government concerns that large banks are unstable and unmanageable.

While the relationship between private and public sector owners and managers has the potential for conflict, dissent has remained muted. This is because both parties have a vested interest in maintaining good relations. Governments may want to shake up banks, but they also want to create institutions with a strong private sector culture. Private sector managers have no wish to irritate the government, as the state is their best protector against the efforts of multilateral agencies such as the European Union to break up their banks.

This balance of power is as delicate as it is essential to the stability of the global banking system. So when John Kingman, the head of UK Financial Investments, quit in July, the market was spooked. It sensed a brick had been knocked out of the British banking edifice created after the collapse of Lehman Brothers.

This delicate balance between state and private is an issue for most major Western states. The United Kingdom has large stakes in Royal Bank of Scotland and Lloyds Banking Group; the United States has preferred stock in (among other banks) Bank of America and equity in Citi, where preferred stock has just been converted into 36% of Citi’s equity. The Netherlands’ government holds parts of Fortis, France has parts of Dexia, Germany has part of Hypo Real Estate Bank, and Iceland has the entire banking system. That is not, by far, the full list.

While many countries have deep problems with their economies, not all banking systems are in such trouble, says George Magnus, senior economics advisor of UBS. “The sense of banking sector fragility seems to be rather less acute in France and in Italy. But Spain, Germany and Ireland are quite the reverse; their banking systems are in very acute difficulties.”

Debate between government owners and business managers has hinged largely on banks’ role in the micro-economy, in particular their willingness to lend the money they received from their governments. Banks have sought to rebuild balance sheets using the state money rather than lend it to businesses of dubious creditworthiness. Banks have gotten used to some routine exhortations from politicians who blame lack of lending for economic weakness. “The rhetoric from officials is certainly that taxpayers expect you to increase your loans in return for the preference shares we’ve taken in your banks,” says Magnus. “There’s some anecdotal evidence that the banks are under pressure not to basically cut or give up their lines on borrowers whose loans may have gotten in trouble and which are part of an asset insurance scheme. Banks are encouraged to lend to small and medium-size enterprises, which are the engines of job creation.”

Government flip-flopping between private-sector-style toughness and policy-led, public-sector-style benevolence was evident in the management of state-owned British bank Bradford and Bingley. New managers appointed by the government instituted tough private sector lending practices to weed out poor-quality borrowers. The bank’s financials quickly responded to the tough medicine. Then, however, it got a new set of messages from the government executives, saying that they wanted the bank to lend more widely and freely.

Problems with lending policies adopted by state banks came to a head in the UK at the end of July, when Alistair Darling, the chancellor of the Exchequer, announced he would hold meetings with the heads of seven UK banks to discuss whether “margins and fees have risen excessively on loans to small and medium-size businesses.” The government warned that it would refer the matter to a state monopoly review body if it decided that the banks were not competing effectively in the lending market. Darling said at the time, “It is very important that each and every bank knows that there is someone looking over their shoulder.”

While banks have politely acknowledged the political interest in their lending activities, they have not felt under any direct threat of intervention. Governments’ capacity to influence the banks’ behavior is constrained by their own free market ideology, says Stephen Lewis, chief economist at Monument Securities, a London-based broker. “Banks have pledged to lend more, but there is no monitoring to make sure they live up to their promises. The Bank of England is very nervous about the charge that they are nationalizing the banking system and taking this critical part of the economy under state direction. It doesn’t go much further than moral suasion to ensure they keep on lending. They have had great freedom to run their own shops,” he says.

The wider economic good depends on banks retaining autonomy over their lending, says Angela Knight, spokesperson for the British Bankers’ Association. “I don’t think anyone would expect banks to lend savers’ money to businesses that aren’t going to survive,” she says. And state banks are behaving no differently to privately owned banks when they restrain lending, says Magnus. “Nobody is doing much lending. Banks that remain wholly in the private sector, like HSBC, Barclays, Italian banks, Deutsche Bank and French banks, are doing precious little new lending. Lending in Europe is still weak and falling in sympathy with the asset shrinkage that we know is part of this whole deleveraging story,” he notes.

While the most stable banks may not have much to fear from direct government intervention, they still have to be careful not to court controversy. Every new revelation of multi-million-dollar pay or bonus packages triggers a torrent of calls from public and politicians alike urging stricter control over the banks. The need for a break-up of the banks into utilities that interface with the public, and “casinos” that interface with the financial sector has been a frequent call, voiced by academics and politicians. There is a good chance that this will happen in the UK, where Lloyds and RBS may be broken up and sold piecemeal into the markets. “The integrity of these banks is not going to be preserved,” says Monument Securities’ Lewis. “The only question is how they will be broken up, who will make the decisions, what the timetable will be, and what will be left in the surviving entity.” The retail deposit-taking parts will almost certainly remain under government control while the racier segments—the so-called casino banks—will be put up for sale.

Break-up fever is also raging in Germany, where the EU is currently seeking to pressure Commerzbank to sell off its investment banking arm, Dresdner Kleinwort. This is regarded as a likely precedent for further EU efforts to require banks that received state aid to break themselves up for partial sale. While some call for break-up, others call for total state control as the best way to force through public sector priorities. Willem Buiter, a former member of the Bank of England’s Monetary Policy Committee, says that governments are best placed to influence banking policy by taking over all of a bank’s equity and controlling its management. “The UK government should take over all UK high street banks on a temporary basis,” Buiter points out. “This would simplify their governance under extreme circumstances, when private ownership and governance have clearly failed. It would have a positive effect on incentives for future bank behavior and diminish the risk of ‘moral hazard.’”

“When the public interest and the interests of the existing private shareholders and the incumbent managers and boards of directors diverge as manifestly as they do in this crisis,” continues Buiter, “the sensible thing to do is to buy out the existing shareholders as cheaply as possible. That way the failed and failing management and boards can be restructured and the new owner can enforce an open, verifiable valuation of toxic and dodgy assets, on and off the balance sheet of the bank.”

The specter of nationalization has surfaced throughout this period of crisis. When the US converted its holding in Citi into a 36% stake in the common equity in July, some commentators raised the possibility that the government might nationalize the whole thing. White House press secretary Robert Gibbs slapped down this suggestion, saying the administration did not intend to nationalize all or even some of the US banking system. “This administration continues to strongly believe that a privately held banking system is the correct way to go, ensuring that they are regulated sufficiently by this government,” Gibbs added.

The Securities and Exchange Commission in the US and the Financial Services Authority in the UK will be key enforcers of state policy in the run-up to a sale of bank stakes. They will also take the flak as the public vents its frustration at banking practices. Indeed, the UK’s Conservative opposition has promised to abolish the FSA and replace it with a beefed up Bank of England as banking regulator.

The need for an early sale of bank stakes is one priority on which most bank executives and state officials can agree. “Governments are uncomfortable with owning and running banks,” says Jonathan Loynes, chief European economist at UK-based consultant Capital Economics. “The longer they stay in the public sector, the greater the risk to the taxpayers. But they want to return them to the public sector with the greatest possible profit. The ideal time depends on conditions in the banking sector. If things improved quickly, they would want to get rid of them sooner rather than later, perhaps in two to five years. It is unlikely to be much quicker, given banks’ problems.”

Magnus dissents from the view that banks should be sold off quickly. “A quick fix and sale to the market would be disappointing, irresponsible and blatantly opportunistic,” he says.

Whether political capital will ever match the economic capital expended on banks is a moot point. But the outcome of this particular form of state engineering has deep ramifications for the future of the global economy. The need for an understanding of the differing objectives of state and private parties will be paramount.