Spain's economy is still under pressure, but signs of renewed confidence are slowly emerging. 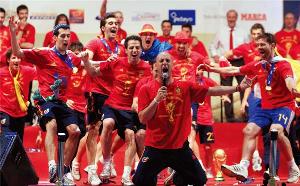 When Spain beat the Netherlands in July to win the country's first-ever soccer World Cup, Spaniards took to the streets to celebrate the historic victory. Immersed in a two-year recession and one of the country's worst-ever economic crises, they seemed to find respite from their daily concerns in the tournament. Yet, with the IMF still expressing doubts over the country's economic outlook and with another ratings downgrade on the horizon (see box), the festivities ended in little more than a bad hangover.

While the recession technically ended with a meager 0.1% GDP expansion during the first quarter of this year, the government predicts the economy will still post a 0.3% contraction for full-year 2010. The IMF expects the economy to shrink by 0.4%. Next year promises to be better, but the finance ministry has cut its 2011 growth forecast from 1.8% to 1.3%, with the IMF remaining significantly more bearish, predicting just 0.6% expansion. In a report released in July, the IMF pointed to unstable financial markets and ongoing weak demand as factors likely to curb growth. The multilateral warns, somewhat euphemistically, that Spain's economic outlook remains uncertain.

Spain's unemployment rate has more than doubled over the past three years, to reach a record 20% in the second quarter of 2010—the highest joblessness rate in the eurozone. The country also has the region's third-largest budget deficit, at 11.2%, although the government hopes to cut the gap to 6% next year. Socialist prime minister José Luis Rodríguez Zapatero is cutting public wages, has frozen pensions and reduced public sector spending, among other austerity measures required as part of an agreement to participate in a €750 billion ($962 billion) EU financial support program for distressed countries.

Government Focuses on Banks
Spain's economic woes began when its housing and construction sector bubble burst two years ago. Construction loans by Spanish banks had soared to nearly 45% of GDP, while the construction sector contributed some 18% of GDP at the height of the bubble. "Bubbles of this sort are in significant part fueled by spreads between borrowing costs, on the one hand, and capital gains on appreciating property, on the other," says Robert Hockett, professor at Cornell Law School. Banks can take some comfort, however, from the fact that they avoided the subprime mortgage debacle experienced in other markets, including the US.

The government is focusing much of its effort on protecting the nation's financial system, which was put through extensive stress tests this year. Twenty-seven Spanish financial institutions (9 full-service banks and 18 savings banks) were tested and only five failed. Under the test, banks were evaluated according to their probable solvency levels under several key variables: GDP and unemployment levels in both 2010 and 2011, as well as short-term interest rates.

Under the stress scenario, GDP would drop sharply, unemployment would soar and spark defaults, real estate prices would fall by 28% and the price of public debt would decline. Financial institutions, under the test's guidelines, had to have a tier 1 ratio (capital, reserves and preferential shares) of 6%, though the legal requirement is only 4%. The best result was for Banca March, with a 19% tier 1 ratio for 2011, followed closely by Banco Santander, BBVA and La Caixa, which together account for nearly two-thirds of the banking sector.

The fact that only five banks failed the test is being viewed positively by the Spanish government, which hopes the results will help reestablish the country's standing in the international financial community. While the number of failures was higher than for Germany and Greece, which had one failure each, Spanish authorities note that this was the result of having had 95% of Spanish banks tested, compared with an EU average of just 65%. The IMF says Spanish banks will need €17 billion in capital and another €5 billion under a stressed scenario.

The five failures involved smaller regional savings banks, known as cajas. "One estimate suggests the cajas need up to €35 billion of additional capital," says Joe Portera, executive vice president and senior portfolio manager at Hartford Investment Management Company (HIMCO), a subsidiary of the Hartford Financial Services Group. "In response, Spain has changed its banking laws to allow cajas to sell up to 50% ownership to outside investors in order to raise capital. The revised legislation also targets a reduction in local and government influence on the cajas and their operations." Several weaker cajas have recently announced mergers, which Portera predicts will slash the total number of cajas by more than 50%.

Under the new savings bank law, regional administrations and public entities saw their voting rights in savings banks' management boards cut to 40%, from a previous 50%, while elected officials can no longer serve on a bank's board. Regional governments had gone on a spending spree in recent years, accumulating some $200 billion in debt. Regional authorities are vowing to cut public sector salaries by 5% and replace only 10% of retiring civil servants. They also plan to go to debt markets this year to raise $57 billion, despite the fact that a dozen Spanish regional governments have been downgraded.

"Overall, we believe the Spanish government has demonstrated clear support for its banks and a workable mechanism to provide capital funding," says Portera. "We believe the €99 billion Fund for Orderly Bank Restructuring [created in June 2009] is of sufficient size. If the market gets comfortable that the stress test process has defined the outer limit of the Kingdom's contingent liability to its banks, we believe Spain has the tools to oversee an orderly consolidation of its financial system."

Investors Remain Skeptical
Meanwhile, some market players are sitting on the sidelines. "At this juncture investors are taking a wait-and-see attitude toward Spain, and for good reason," says Joe Quinlan, managing director and chief market strategist in the Investment Strategies Group at Bank of America. "Despite belated efforts at fiscal consolidation, there remains a great deal of uncertainty around Spain's fiscal health and economic outlook."

Quinlan, a former senior global economist and strategist for Morgan Stanley, feels there is still more downside to Spanish equities. "A buying opportunity is emerging, but not yet," he says. "There are better places to put money to work in Europe, namely the more robust markets of Germany and the Nordic nations. The overall general mood toward most asset classes in Spain remains bearish; no sectors stand out, although a few large-cap banks may recover before other equities."

Quinlan feels it will be another six to nine months before we see a recovery in Spain, with the government needing to issue more debt and heightening investor concerns during that period. "On a relative basis, Spanish assets are not cheap enough and the financial picture is not clear enough for investors to take the plunge," he adds.

F. John Mathis, director of the Global Financial Services Center at the Thunderbird School of Global Management, still sees some opportunities. "With risk levels high and rising (high CDS premiums), there are many assets that are selling at a discount, such as real estate and government and corporate bonds." Equities, especially those related to residential construction companies and construction-related industries, and stocks for banks and other financial services-related industries are also selling at low valuations says Mathis, a former senior financial analyst with the World Bank. "Companies that receive more of their revenue from outside of the euro area should recover more rapidly and do better than those solely dependent on domestic sales."

Portera feels that developments in Spain are causing investors to avoid the country at the moment, but agrees that some buying opportunities exist. "We do see value in names, such as Banco Santander, which attain a large percentage of their revenue outside the Iberian Peninsula," he says. Portera says the potential for a debt-restructuring event sparking further risk aversion remains a possible pitfall. "This is still a low-probability event, but given current yields in Spanish government bonds at less than 200 bps over German bonds, we do not think you are being adequately compensated for the volatility. Certain bank names in US dollars are attractive as they are being punished for the neighborhood they operate in and not necessarily for their operating performance."

Treasuries Sale Prompts Optimism
In July the Spanish government sold €3.4 billion of three-month treasury bills in the first such sale since completing the EU banking sector stress tests. Its borrowing costs fell during the sale, with July's bills placed at an average rate of 0.672%, down from 0.913% at June's auction. It also sold six-month debt at an average of 1.144% in July, compared with a higher 1.577% in June. Authorities hope the auction's results indicate that investor confidence is increasing, albeit gradually. "There needs to be a commitment to work together to overcome the crisis, recognizing that viable long-term solutions will likely involve near-term challenges, sacrifices and difficult decisions," says Robin Lumsdaine, professor of international finance at American University's Kogod School of Business. "It's also important to try to have a clear communication strategy that keeps people informed, instills confidence and alleviates panic. I realize that's easier said than done, but insufficient buy-in can derail even the best ideas."

The situation is not boding well for Zapatero, who is charged with introducing the difficult austerity measures that are pushing his popularity rating downward. Several key labor unions are calling for strikes. As a result, social unrest is becoming a concern for the administration. "The long period of recovery in Spain for the economy and the financial system will likely result in some civil unrest, which may have some political consequences for the current government," says Mathis. "This will make it more difficult for the government to implement the appropriate policies."

At least the soccer celebration was fun while it lasted.